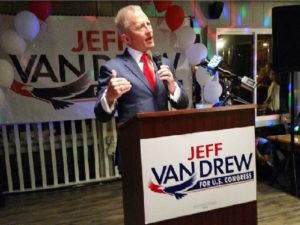 State Sen. Jeff Van Drew swept to an overwhelming victory in the Democratic primary for the 2nd Congressional District, while political activist Seth Grossman pulled off a big upset to capture the Republican nomination.

With the retirement of U.S. Rep. Frank LoBiondo, a popular Republican who has represented South Jersey since 1995, the district is seen as a key battleground race during the midterm elections in November.

Van Drew, a veteran lawmaker who has served in both New Jersey’s Assembly and Senate, was the heavy favorite against three lesser known Democratic challengers. Helped by the backing of the national Democratic Party, he faced only token opposition in the primary from Tanzie Youngblood, a retired teacher, William Cunningham, a former congressional aide, and Nate Kleinman, a political activist. 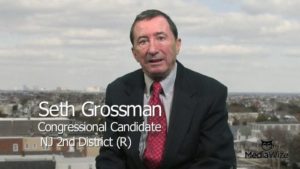 Grossman, who touted himself as a staunch supporter of President Donald Trump, defeated the presumed frontrunner Hirsh Singh of Linwood, who had lined up support from most of the Republican county organizations within the district.

Addressing his supporters on primary night, Van Drew portrayed himself as a champion of South Jersey who is willing to fight the Washington establishment for his constituents.

Van Drew immediately outlined a list of top issues for his campaign, stressing the need to rebuild South Jersey’s fragile economy while focusing on the region’s tourism, fishing and casino gaming industries.

“We know we have challenges with our economy,” he said.

He also called for more affordable healthcare, less expensive prescription drugs and a fairer tax structure, especially for senior citizens and younger people to keep them from moving out of New Jersey. He also pledged to fight for better healthcare and social services for the nation’s veterans.

Drawing applause from the crowd, Van Drew vowed to fight a proposal by the Trump administration to open up the New Jersey coast for offshore drilling of gas and oil. Political leaders along the Jersey Shore have been united in their opposition to the Trump plan, warning of the possibility of an oil spill that could be catastrophic to the beach towns and the environment.

Grossman, who called himself the “most consistently conservative” of all the candidates, said he was the clear choice by Republican voters.

“The reason I ran in the first place in the primary, even though I didn’t get the endorsement, is I knew the people supported President Trump and the party leaders didn’t recognize how strongly the Republicans felt about it,” Grossman, 68, of Atlantic City, said in a phone interview after a marathon day on just two hours of sleep.

His campaign focused on immigration and blamed illegal immigrants for putting a strain on New Jersey and the nation’s welfare system, schools and police departments. He also criticized the Obamacare health system.

Grossman said the poll results should be proof to the Republican leaders, that these are key issues that voters are concerned about.

“I felt that the leaders were misreading the people,” he said. “The voters expressed their views strongly tonight.”

Van Drew, D-Cape, Cumberland, Atlantic. He noted it will be a tough fight to beat his opponent.

“Jeff Van Drew is a likable person. But his party has been hijacked by radical Democrats. Now, it will be a real test,” Grossman said. “I am new to this and this is the big league. We will have five months to prepare. It will be a real challenge.” 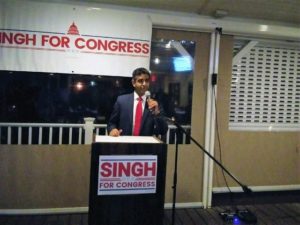 A dejected Singh entered his campaign headquarters at McCullough’s Emerald Links golf course in Egg Harbor Township at about 10:30 p.m. The mood was somber.

He apologized to his supporters for the loss.

“I’m sorry for letting you down,” he said. “We put countless hours in and we did it all for the right reasons. I just called Seth Grossman and congratulated him. We want him to do what he can now. He was very gracious.”

Singh said he will reassess his campaign, but Trib Singh, his father, said he has no doubt his son will run again.

“He is in this for good,” Trib Singh said.