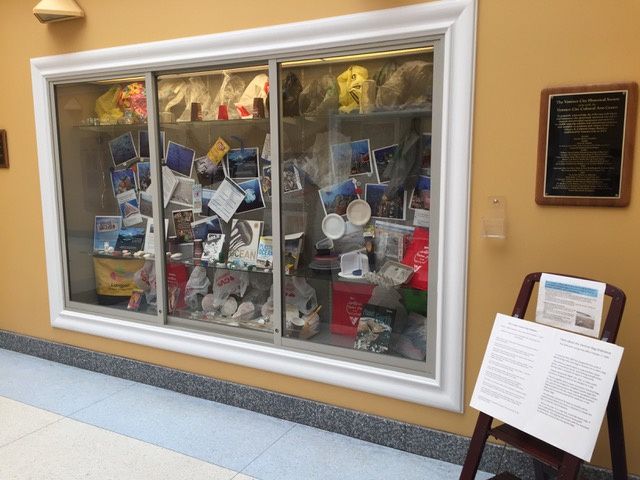 VENTNOR – Volunteers of Downbeach green teams have collaborated on a display in the lobby of the Ventnor Cultural Arts Center, 6500 Atlantic Ave., to educate the public about the city’s pending bag fee ordinance, which goes into effect on Oct. 1.

The display, which was assembled by Atlantic County Library System staff with material supplied by local green teams, includes photographs, books and artifacts such as plastic bags and bottle caps found on area beaches and demonstrates the plastic pollution problem and the need for the ordinance.

Sustainable Margate green team member Steve Jasiecki put together a narrative displayed next to the case that explains why Ventnor created the ordinance.

“There is lots of stuff in the library case with really no explanation, so I thought it would be helpful for people to know the reasoning,” Jasiecki said. “I didn’t want people thinking it was for grocers to make more money or for the city to collect a tax.” 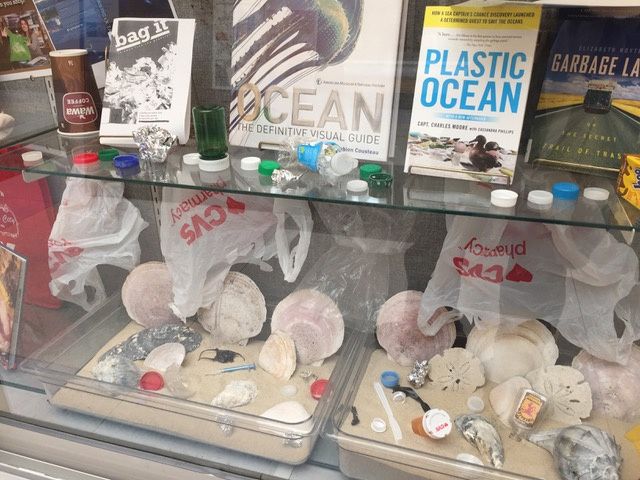 Jasiecki supplied information to educate the public, including summertime visitors, about the 5-cents fee that will be imposed on all single-use carryout bags – both plastic and paper – starting in October. The fee will not be charged if shoppers use their own bags and those paying through public assistance programs will be exempt from paying the fee.

“The information was gathered from the city bag ordinance and fliers that were sent out with the (Ventnor) tax bill,” Jasiecki said. “We want the people to know that the reasons are ecological and environmental and not to make money.”

Jasiecki, who has experienced plastic pollution of the ocean first-hand on his scuba diving adventures in tropical locales and helps with back bay and beach cleanups on Absecon Island, said plastic bags are found are found everywhere – in the ocean, on beaches, in wetlands, tangled in trees and telephone wires and rolling city streets like urban tumbleweed.

The plastic that ends up in the ocean is mistaken for food and ingested by marine life.

“Turtles, dolphins and whales have been found to have plastic bags lodged in their stomachs and intestines, which causes them to starve to death,” he said.

Bags also clog storm drains, which can exacerbate flooding, and cleanup is a burden on taxpayers, he said.

With the help of a Sustainable Jersey grant secured by the Ventnor Green Team, the city has embarked on a six-month campaign to educate shoppers at all of Ventnor’s businesses before the fee is imposed. It is not a tax, but rather a user fee that stays with the store owner to help defray the cost of purchasing bags.

The $10,000 grant will allow the green team to purchase reusable bags that will be distributed in the community and help store owners pay for the mandatory signage required by the ordinance.

Green team member Beth Kwart, who is also chairwoman of the Surfrider Foundation South Jersey Chapter which advocated for the ordinance, said the grant would also pay for advertising the ordinance.

“We already have a billboard reserved on Rt. 40 coming into Absecon Island to educate people about the bag fee,” Kwart said.

Earlier this year, the became city the second municipality in Atlantic County to impose a fee on single-use carryout bags. Longport imposed a 10-cents fee on carry out bags last year.

Levinson said the green movement has made residents more environmentally aware and he believes they are ready for a change.

“I believe people do want to do the right thing,” he said.

Atlantic County Freeholder Board Chairman Frank Formica also said the board intends to introduce an ordinance banning plastic bags and straws from all county parks.

Ventnor Mayor Beth Holtzman said the ordinance will be a “culture change” for residents, visitor and shoppers, but one that will benefit future generations.