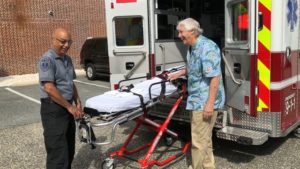 LONGPORT – Members of the Longport Volunteer Ambulance Squad, a division of the Fire Department, are currently training to operate all the bells and whistles on the squad’s brand new ambulance.

The department took delivery of the ambulance two weeks ago and will likely be put into service by the end of next week, said Mayor Nicholas Russo, who is a volunteer firefighter and member of the squad.

“We’re still training on it,” he said, stating that Fire Chief Levon “Lefty” Clayton wanted to make sure the entire crew was familiar with all of the ambulance’s customized features before putting it into service.

Quality Assurance Manager Tom Finley of VCI, Inc. was on scene Wednesday to check that all the features that were ordered for the custom 2018 Ford E-450, Horton Type III vehicle were delivered and operational.

“When a vehicle comes in, I look at the building specifications and make sure it was built the way it was ordered,” he said. “This vehicle is fully customized with some great safety features, including airbags throughout the cabin.”

Finley said the airbags, which are only available on custom Horton vehicles made by VCI Emergency Vehicles Specialists of Berlin, will ensure the driver, passengers and patients are safe in the event of a crash or rollover.

Russo said the ambulance cost $205,000 and would ensure the safe transport of Longport residents and visitors to area hospitals. It was funded through a bond ordinance approved in 2016.

Click here to view a video of the ambulance.