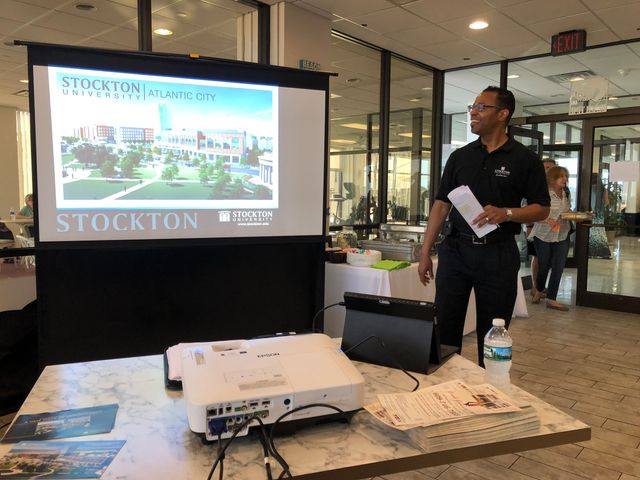 VENTNOR – Although technically it’s located in the next town over, residents of the North Beach area of Ventnor are excited to have Stockton University opening in the Downbeach/Chelsea area of Atlantic City.

“We are happy to be your neighbor,” she told Stockton Atlantic City Chief Operating Officer Brian K. Jackson at the association’s eighth annual Meet and Greet.

The Stockton campus is just one of the things that are new and exciting in the Downbeach area, Co-chairman Richard Gober told the crowd gathered Saturday, June 16 at Uncle Gino’s restaurant at 5000 Boardwalk.

“There is so much going on in Ventnor. In addition to Stockton, there’s the movie theater, a bike path and streetscape project.”

More than 100 North Beach residents turned out for the event – the largest gathering ever, Gober said – for Jackson’s virtual tour of the new campus.

Jackson attended last year’s meet and greet when the Gateway Project, a public-private partnership which also includes a new headquarters for 200 South Jersey Gas Company employees, was still in the planning stages. The project is the largest partnership of its kind in New Jersey, costing $220 million, $176 million of it funded by the state for the Stockton expansion, Jackson said.

“I marvel at it every time I go by,” said Jackson, whose office is located in a building on Atlantic Avenue a block north of the campus. “It’s going to be extraordinary.” 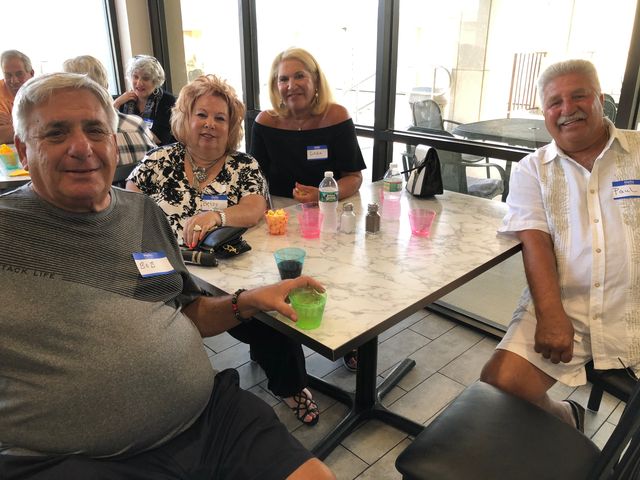 The campus includes 216,000 square feet of beachfront residential housing accommodating 533 students, faculty and staff, and three retail spaces. About 90 percent of the units are filled, he said.

Campus dining will be provided by Chartwell’s, which has a food court at the Galloway Township campus, but other retail restaurants and shops, including Carluccio’s pizza, will be open to the public, he said.

Most of the retail space has already been leased, and the few remaining spaces are currently in negotiations, he said.

A free shuttle will transport students between campuses starting at 8:30 a.m. and run every 45 minutes until midnight.

“We will have summer enrollment, so we expect to be busy year-round,” Jackson said.

There are 120 classes scheduled for September, some of which have openings.

One resident asked about security for the campus.

Jackson said the university is working with Atlantic City Police to develop a comprehensive plan, which includes 200 security cameras that are tied to the Atlantic City system. A Stockton Police sub-station will be located in the academic building, which will be staffed by two officers, along with a private security company.

An urgent care center will be located on the ground level of the SJ Gas headquarters, and students will be counseled during orientations on the “temptations” that exist in the city, such as drinking and gambling, and will also meet with leadership of the Atlantic City Beach Patrol to discuss beach and water safety, he said.

Another resident questioned traffic safety, asking if improvements to the roadway would be made.

Jackson said a complete traffic study was done by the developer, ACDevco, but the only improvements that will be completed before the campus opens in September is a “hard stop” on Albany Avenue with additional crosswalks.

“We are working with local and state officials and it will likely be a priority in Trenton,” Jackson said.

Jackson said the university has set its sights on creating a university area overlay district as part of the city’s Master Plan to spur additional investments.

The area would encompass the blocks surrounding the campus on both sides of Albany Avenue from the Boardwalk to West End Avenue, and from Sovereign to Dover Avenue, encompassing parts of the CRDA Tourism District and Bader Field where the university has suggested building a marine research center.

The proposal includes permitting additional uses in commercial area, such as medical clinics, publishing offices, social and civic organizations, educational facilities, art galleries and research labs, all of which are currently not permitted in the zone.

The proposal passed first reading at City Council and was sent to the Planning Board for review.

If the changes are recommended and the plan adopted, the university would post signs and banners throughout the area to create a sense of place.

Sixth Ward Councilman Jesse O. Kurtz said he is sponsoring the legislation to highlight the campus and spur new development.

“It would look like the university districts in Philadelphia and New York City,” he said in a telephone interview Monday, June 18.

It is likely the ordinance will be up for a second reading in July, Kurtz said.