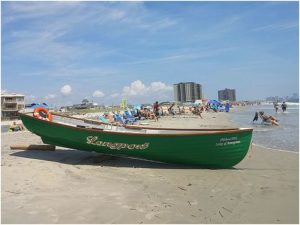 The Board of Commissioners June 20 approved an ordinance amending its developmental code to require “open trench” installation of underground utilities. The change allows the municipality to physically inspect the conduit containing the wires to ensure they are installed at the proper depth and are safe. Trenches may not be filled in until an inspection is completed.

The board re-introduced a salary ordinance because there was a change in content since it had its first reading on June 6. The ordinance originally amended the salary range for Beach Patrol captain to $160-$205 per day with a maximum of 85 days.

However, Acting City Clerk Matthew Conlon said there was a “substantial change” since introduction that required that the ordinance be reintroduced. The new ordinance states the captain’s salary range will be $160-$108 with a maximum of 85 days, not including boathouse days. The salary range includes a $3 per day stipend for CPR and First Aid certification. It also states that the chief and captain will not receive any bonus for working on Labor Day or having EMT certification. A public hearing on the ordinance will be held 4:30 p.m. Wednesday, July 11.

The recent cancellation of this summer’s planned Longport Farmers Market requires that the city return vendor fees that were paid on account. Six vendors who signed up to be part of the market will receive reimbursement of the $225 fee they paid in advance.

Mayor Nicholas Russo said the market was cancelled because it was difficult to get vendors to sign up due to the proliferation of farmers markets in the area and their request to have exclusivity on the products they sell.

The commission has agreed to purchase three 2018 “Gator” vehicles for beach and dune maintenance, beach patrolling, and to transport beachgoers who need assistance crossing the dune.

Construction of the dune was a “game changer” for the way the Public Works Department and Beach Patrol maintain and patrol the beach, Russo said.

“We must be able to assess our commitment to emergency response,” Russo said.

The Public Works Department needs a vehicle with all the necessary attachments small enough to maintain dune access points, and the Beach Patrol needs a vehicle to assist older folks and the handicapped, he said.

The borough will purchase three John Deere vehicles at a total cost of $52,398. The borough will take delivery through Central Jersey Equipment, LLC. The purchase is being funded through this year’s capital budget.

The vehicles will also be used by the Police and Fire departments as needed, Russo said.

The Police Department promoted Joshua Sikoryak to a full-time position as a patrolman. Sikoryak was working as a Special Law Enforcement Officer II. He will obtain all the necessary training and replace a full-time officer who will retire later in the year, Russo said.

According to Library Director Richard Gerhardt, there are many new programs being offered to accommodate summer visitors, children and adults, including the Food and Film series, gaming events and financial talks. Free wi-fi is now available in the park behind Borough Hall. The visiting author series will kick-off 6:30 p.m. Tuesday, June 26 with a talk by Matty Dalrymple. The summertime concert series will begin 6:30 p.m. Friday, June 29 with a performance by local jazz singer Gina Roche. The library is hosting book clubs for adults and children and features the work of local artists on display in the gallery. June’s featured artist is local resident Doug Farrell and Dale Levy will be featured during July and August. Yoga classes are planned for August.