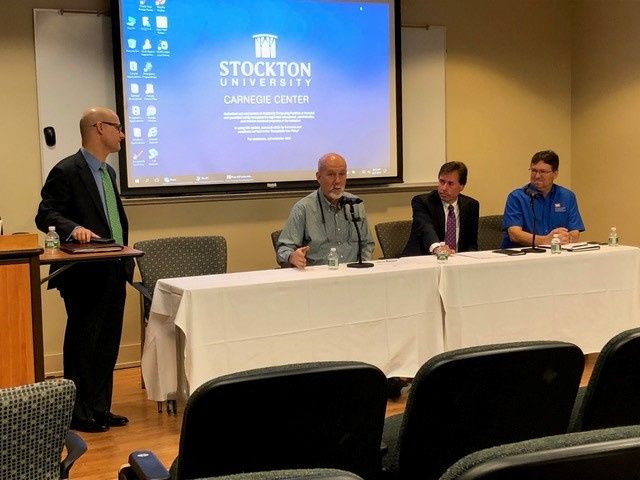 ATLANTIC CITY – Recently engineered beaches along the coastline are in better shape than ever and ready for the summer tourist and hurricane seasons, federal, state and Stockton University officials said Wednesday morning during an update on the status New Jersey’s beaches.

“I can confidently say the New Jersey is in a good position for the tourism season and for the hurricane season,” NJ Department of Environmental Protection Assistant Commissioner of Construction and Engineering David Rosenblatt said.

The state is also in a good position with water quality, he said, with water testing above the standards 90 percent of the time.

“With that, we look forward to a great beach season.”

The U.S. Army Corps of Engineers is nearly finished building a statewide shore protection system from Mantoloking to Cape May that includes building a uniform sand dune along the coastline that was funded through the federal government’s Sandy Recovery Improvement Act.

Following the “superstorm” of November 2012, which  devastated central and northern parts of the state and New York, the federal government paid 100 percent of the cost of the Army Corp’s authorized, constructed and planned shore protection projects in Monmouth, Ocean, Atlantic and Cape May counties.

To date, nearly 163 million cubic yards of sand have widened New Jersey beaches at a cost of more than $1.2 billion statewide, officials said.

And since Hurricane Sandy, more than 40 million cubic yards of sand has been used to replenish the beaches.

The ACE and DEP works closely with Stockton’s Coastal Research Center, which was formed after Hurricane Gloria caused considerable damage to the coastline in 1985. The research center monitors the coastline in 106 locations twice a year in spring and fall to a depth of 16 feet, which is where erosion and natural replenishment takes place, the center’s Executive Director Stewart Farrell said.

Farrell said that despite sand migration, by 2015, the beaches were back where they were before Hurricane Sandy.

Although nearly all of the previously approved projects in New Jersey are completed, the ACE is now designing a project in Wildwood, where the beach is extremely wide, but low, Watson said.

Contrary to what many Margate residents believe, the Absecon Island Shore Protection Project did not ruin Margate’s beach, Rosenblatt said.

People in shore towns up and down the New Jersey coastline think their beaches are the best, he said. Rosenblatt who grew up in Ventnor, said he thought so too, until he started visiting other beaches along the coast. The beach project offers better protection for residents and taxpayers, he said.

“All the beaches are different, and the people that go to those beaches swear that they have the best beach in the state, maybe in the country,” he said. “People are very protective of what they have. We changed their image of what they like.”

Eventually people will come to appreciate the dune and beach widening, especially if another Sandy hits South Jersey.

“The proof will come that this is a good thing for the area,” Rosenblatt said.

“Anything that’s different is subject to criticism regardless of what happens,” he said, noting that the dune is higher and beachgoers must hike over it, but it will offer better protection in storms, especially in storms that last more than a few hours.

The officials made their comments during a Jersey Shore Beach Report session held at Stockton’ Carnegie Center Wednesday, June 27. Members of the media and mayors were invited, but none of the mayors from Atlantic County shore towns attended the session.

Watson said the new $19 million drainage system being installed in Margate is a “premier” system, that is working perfectly. There are 60 similar outfalls in Altantic and Cape May county, he said, so although residents think they are unsightly or dangerous, they are common in shore towns.

Asked why the pipes were not installed before the dune was built, Watson said that it is the municipality’s responsibility to take care of their interior drainage systems.

“That was the plan all along. Then Hurricane Sandy hit, and the public law was passed, the governor and state said they want to execute. We executed the project and came up with a temporary solution that would have sufficed until the real system was able to get built.”

Last summer, after the dune was built, stormwater collected between the landward side of the dune and the citywide bulkhead system, which required the ACE to pump standing water over the dune and into the ocean, build up crossovers to allow people to get to the beach and replace some of the sand that was excavated and used as a base for the dune.

Although Margate was unsuccessful in its attempt to stop the dune project, a federal court judge ordered the ACE to correct the ponding issues and provide safe access for beachgoers.

Although it will take another year to complete, the ACE has temporarily halted construction of the pipe system for the summer, widened certain areas to accommodate catamarans and added ADA access points, which is normally the responsibility of the municipality, Watson said.

“We are working with them,” he said.

Farrell said that it may be difficult for some people to cross over the dune, but in the long run, it will provide protection from coastal storms.

The ACE has now turned its sights to backbay flooding, but instead of doing spot-to-spot projects, it will take a regional approach to solving problems, Rosenblatt said.

Watson said the ACE is about a year into a study, which could take several more years to complete, design and get funded.

A public meeting to share results of the ACE’s preliminary investigation will be held 5-8 p.m. Wednesday, Sept. 12 at the Ventnor Educational Community Complex.

Hear more about what they have to say in this video.