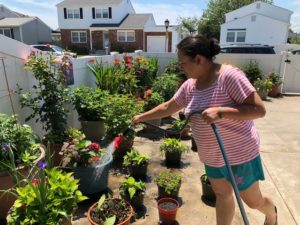 The Ventnor Beautification Committee will hold its biennial Garden Tour 10 a.m. to 3 p.m. Sunday, July 8 at 22 locations throughout the city. The rain or shine event features some of the city’s most prolific formal, avant-garde, container and vegetable gardens on display at the height of the growing season.

“I always look forward to picking the gardens and finding the most interesting, funky, big and intimate gardens,” said volunteer Marsha Galespie, whose Ventnor Heights garden is also on the tour.

“I learn so much from all the gardeners,” she added. 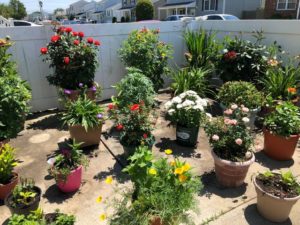 There are several gardeners participating for the first time this year, who are more than happy to share their ideas, philosophies and techniques.

Thanh Wong has been working on her Wellington Avenue garden for the seven years she’s lived in the ranch-styled home. Although she has a traditional enclosed garden, it’s the container garden in what was formerly her driveway that offers new insights for gardeners.

Wong is happy to tell visitors how she finds success growing flowers, berries and vegetables in containers – some small, some oversized and others double- or triple-lined.

“Putting tomatoes in pots saves on water,” she said.

She waters well in the early morning and a little lighter at 6 p.m. “to keep them happy,” she said. 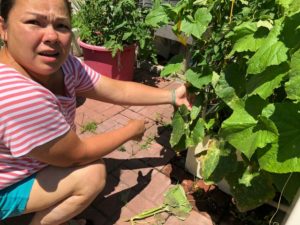 Wong harvests throughout the growing season by planting several plants in the same pot at different times in spring.

“When one is spent, the next is ready to grow,” she said.

Her secret feed is chicken manure, which she spreads throughout her garden on a cool day in early spring, so it doesn’t bother the neighbors.

“It only smells for one day,” she said. “I do it when their windows will be closed.”

There was one very large and yellowing cucumber hanging over the edge of one pot, with other smaller ready-to-pick cukes on the vine.

When asked if she was going to pick that one too, Wong replied, “No, no, don’t pick that one. That’s the one I will use to extract seeds for the next growing season. That’s stays on till the end.” 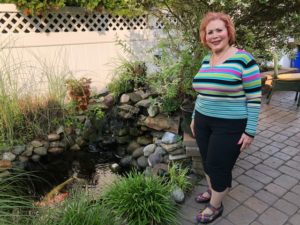 Charlotte and Dan Zacher say the colors of their garden reflect the color of their lives.

“We are attracted to textures and species that relate to each other,” Charlotte Zacher said.

They have lived in their Ventnor Heights home for 18 years and recently removed an overgrown tree re-landscaped the front yard, which is more formal than the back.

The narrow backyard has several seating areas, a dining table with an umbrella and a koi pond with five koi swimming happily. They had six, but one died from overfeeding, she said. 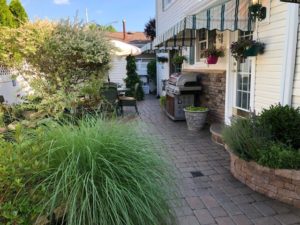 The garden is dotted with grasses, perennials and annuals for added color. Some are in the garden bed of the intimate back yard, and tomatoes growing in pots line the side of the house.

Dan Zacher, a practicing architect, is also an artist. Paintings of some of the flowers his wife grows in the garden are scattered throughout their home, which is filled with antiques.

She showed him a photograph on her cell phone of a perfect peony that grew in the garden a few weeks ago. She suggested he paint that next. Then, she scrolled and there were two perfect peonies – one for each one of their grown children.

“Our family and friends are the constants in our lives, so are the perennials in our garden,” she said.

Cyrus Gordon’s family has owned his historic home on the corner of Atlantic and Rosborough avenues for more than 100 years. 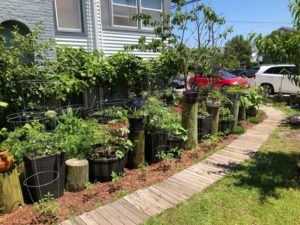 “My great-grandfather built the home, and six generations of Gordons have lived here,” he said standing in the side yard, which some could call a berry farm.

Everything in his garden is planted from seed, he said, including 15 different types of tomatoes that are ready to start producing fruit. He holds the vines erect by wrapping them with wire fencing. At the base of each is a cucumber plant waiting to latch onto the wire and offer additional support for the tomato plant, he said.

At the front of the garden are peach, nectarine, plum and Asian pear trees in a row. Along with the blueberries, blackberries and grape vines, Gordon has strawberries that make pink flowers and produce sweet strawberries all summer long. He even has a kiwi tree near the back of the house.

“I got a real taste of what farmers have to deal with, with the heat, fungus, and squirrels,” he said. 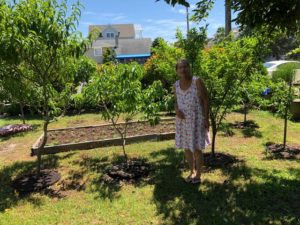 His green thumb partner, Joyce, helps tend the garden, which includes a raised bed filled with seedless watermelon plants just waiting to take over the lawn.

“We have such a hard time growing grass there, we’re hoping the watermelon takes over so we don’t have to mow,” she said.

The harvest of their little farmette is given to family and friends, Gordon said.

“I’m not much of a vegetable eater, but I like growing something you can do something with,” he said. 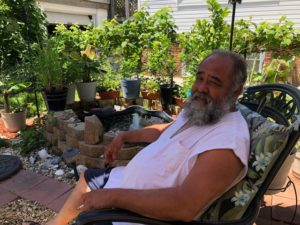 Gordon said they spend at least four hours a day in the garden, “but that’s mostly just looking at it,” he said.

Proceeds of the event will be used to beautify Ventnor City.

Check back on Sunday for a photo gallery of the Ventnor City Garden Tour.