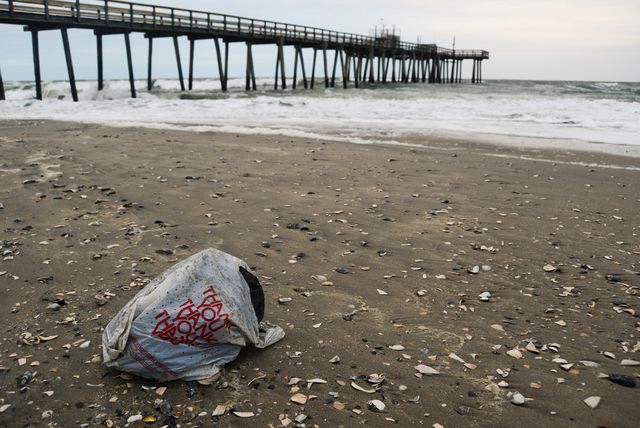 The Atlantic County Board of Chosen Freeholders introduced an ordinance Tuesday, July 3 that would make it unlawful for any county park visitor to carry-in single-use plastic bags and plastic drinking straws.

Gatto said she was inspired to give up plastic bags for Lent, a 40-day period of fasting or personal sacrifice before Easter in the Christian faith, after seeing a Facebook post suggesting the challenge. All she needed was one incidence of forgetting to bring reusable bags into the store to make a permanent lifestyle change, she said.

“I was limited to purchasing only what I could carry,” she said. “You have to put yourself in a mindset. I keep tons of reusable bags in my car now.”

Freehholder John Risley agreed that the county’s ordinance is the “beginning of a change in culture.”

“I liken it to when I was a councilman in Linwood in the early 1980s and I proposed mandatory recycling and I was told by a lot of people you can’t ask people in the Gold Coast to separate their trash. Now it’s become second nature,” he said. “We really don’t need all these bags. It’s just a matter of gradually changing our ways to say no to plastic.”

Knowing the ban will take some getting used to, Atlantic County Park Rangers will not enforce the $500 penalty for violations for a year after the ban is adopted, Gatto said.

Instead, the county will embark on a system-wide educational campaign to inform the public about how plastic ends up as litter, gets into the waterways and negatively affects the fragile marine environment. It will erect signage at park entrances, post a notice on the county’s website and ask local municipalities and community groups to assist in the educational campaign.

“We decided to go with a 365-day warning period. We won’t be arresting people right away. You get a year to get some warnings and get into the habit of bringing reusable bags into our county park system,” she said.

According to Freeholder Richard Dase, Atlantic County municipalities will be encouraged to follow suit.

“It’s a good start. It’s an education process,” he said.

Freeholder Chairman Frank Formica said the ordinance is “a positive step to addressing an environmental hazard.”

Boy Scout Chase Mazur, 12, of Egg Harbor Township, who attended the meeting because he is working to obtain Scouting’s Communications Merit Badge, which requires candidates to attend a government meeting to understand different viewpoints on an issue, said he thinks the ordinance is sound.

“I think doing it is a good idea, because I’m already doing a Sustainability Badge, which goes with plastic bags. Pollution is big nowadays,” he said, addressing the board.

Chase, a Star Rank member of Troop 55 of Somers Point, said he would consider ways to assist in the educational campaign.

Dase said the ordinance was discussed during meetings of the Code Committee, which determined that since there is no fee to be collected, the ordinance would not conflict with proposed legislation at the state level that would impose a 5-cent tax on plastic bags. One cent of the charge would remain with the store owner and the remainder would go to the state’s lead abatement program.

Both houses of the New Jersey Legislature have approved the measure and sent it to Gov. Phil Murphy’s desk where it awaits his signature. Murphy has not signed it and the estimated $23 million revenue it would produce was not included in the 2018 budget approved on June 30.

Longport was the first municipality in New Jersey to impose a 10-cents fee on single-use paper or plastic bags in 2016. Ventnor City followed suit earlier this year with a 5-cents fee that will become effective on Oct. 1. In both instances, the fees would remain with the store owner. Municipalities that already have bag fee ordinances on the books would be grandfathered and not have to collect the tax, according to language in the pending legislation.

Some environmentalists say the state fee is a nothing more than a money grab, would do nothing to prevent plastic pollution, and that the bags should be banned completely, like they have been in California, Hawaii and Washington, D.C.

Freeholder Maureen Kern noted that the Atlantic County Utilities Authority website, acua.com, is a great resource that informs residents where they can recycle plastic bags in their own neighborhood.

The ACUA does not accept plastic bags and film in its curbside collections because they get tangled in the mechanical sorting equipment and there is no secondary market for it.

A public hearing on the ordinance will be held 4 p.m. July 17 at the Stillwater Building, 201 Shore Road, Northfield.