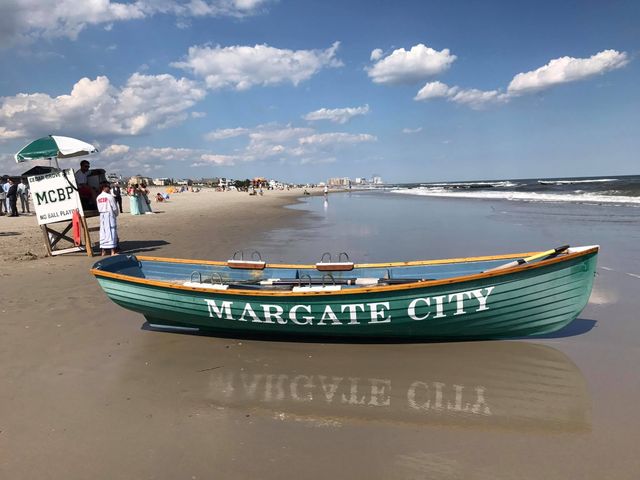 “Over the course of the past year, there has been a wave people that say they want to have some representation,” including business owners, residents and summer homeowners, Margate Homeowners Association Preident Jay Weintraub said.

Margate Mayor Michael Becker met with Weintraub early Thursday morning, and at the Board of Commissioners meetings held later in the day asked city officials to update residents on what was being done to address installation of Mobi-mats at beach entrances and the status a grant that was awarded to purchase bicycle racks.

Regarding the bicycle racks, officials said the city partnered with Ventnor on a South Jersey Transportation Planning Organization grant that would fund the installation of bicycle racks at beach-block street-ends and other locations in Margate, and at recreation and commercial areas in Ventnor. A $275,000 grant was awarded in 2017, and turned over to Atlantic County government for the bidding.

According to city Engineer Ed Walberg, the county notified him by telephone that the county would award his firm, Remington, Vernick and Walberg, a contract to develop bid specifications.

“We are waiting for the bureaucracy to get through. We’re waiting for the funding to be in place at the county,” Walberg said. “But unfortunately, as a former commissioner said, ‘the government moves at glacier speed.’”

Several bike racks have already been installed in strategic locations, and “independent of the grant, we’ve ordered some additional bike racks,” Walberg said.

Police Chief David Wolfson said he has a list of approved sites for the bike racks, but Administrator Richard Deaney said he would like residents to provide input on where they think racks are needed.

Several other racks are on order and should be delivered soon, Public Works Supervisor Frank Ricciotti said.

Commissioner Maury Blumberg suggested that the Public Works Department install wood planks across the street side of bulkhead timbers to create an area where bicycles can be chained, similar to what Longport does, he said.

“They would be a great temporary solution and not very expensive,” Blumberg said. “Until we can get the money and the racks on a permanent basis, why not do that?”

Ricciotti said it would be a simple task for city workers to undertake and that the city already has wood that it can use.

“It would be cheaper than bike racks,” he said.

Regarding beach access, Ricciotti said that the Army Corps of Engineers, which placed Mobi-mats at every beach access point between the bulkhead and the toe of the dune, would not place the ADA-accessible roll-out mats on the dune because they pose a trip hazard and are too slippery for the incline.

A woman recently tripped on a mat and broke her wrist, Ricciotti said.

Walberg said until the newly-planted dune grass grows, blowing sand will continue to collect on the cross-overs, which have a gravel base.

The city has also purchased two new pieces of equipment small enough to scrape the sand off the crossovers and gravel to keep the crossovers stabilized.

“We were extremely busy with the holiday, but by next week we will be down there cleaning those walkways off,” Ricciotti said.

Public works employees will continue to remove the sand as part of their regular beach maintenance program, he said.

Residents in the south end of the city complained that the sand is too soft on the dune for people with disabilities to cross over.

Commissioner John Amodeo explained that the dune building project is not completed at the lower end of the beach south of Washington Avenue.

“It was a request of the city for the Army Corps not to be on our beach this summer, because our business community suffered so badly last year,” Amodeo said.

The ACE agreed to pull its equipment off the be sand to finish the job in September.

To accommodate residents, the Margate City Beach Patrol leased a 4-wheel-drive vehicle to pick up beachgoers and take them to the water’s edge.

“The commissioners did it this year as a trial and error thing. As we move forward and see the need to keep that, maybe next year we will have two or three vehicles. We are trying our best. We are all here in summer to utilize our natural resource, which is now a man-made engineered structure. We have no control, we fought it, we lost, and this is what we have,” he said.

Amodeo said residents can call Beach Patrol Headquarters at 609-822-2370 to request the escort service at least 30 minutes before they want to go to the beach.

One resident said four Mobi-mats on her street end were mysteriously moved to another location.

“Now they are in front of a perfectly flat area in front of the building between Adams and Washington,” the woman said. “I heard someone say, when it gets dark, let’s go over and lift the mats from that perfectly flat place and put it up where people can’t get up the hill.”

“After the woman fell and had a fracture, we are looking for ways, through the manufacturer and Army Corps, to keep the mats down. As soon as we get that, everyone will have mats,” Becker said.

Nevertheless, the dune is too steep for anyone to cross, one resident said.

“They built a mountain with no road over the mountain,” Jeff Rosen said. “You cannot enjoy that beach and drag a cart with two chairs, an umbrella and table back and forth, it is virtually impossible.”

He said Mobi-mats should be installed at every possible location to make it easier for beachgoers.

“If it’s a cost issue, jack up the price of beach badges $2, or make beach badges mandatory on Memorial Day so all the kids who make a mess of the beach pay for those blue mats.”