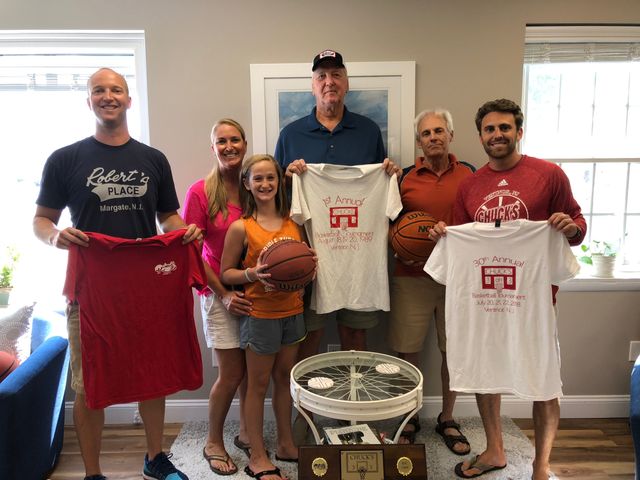 VENTNOR – What has become a multi-generational summer tradition at the Jersey Shore will have its last hurrah this weekend at the Ventnor Educational Community Complex.

The Chuck’s 3-on-3 Basketball Tournament, which has been held in Ventnor for the last 30 years, will hold its final tournament Saturday and Sunday, July 21-22.

“It was a lot for the Cakert family to put on over the years and 30 is a good number to end it,” said Albert “Albie” Battaglia, who helped to organize the very first tournament to honor a high school buddy.

The tournament was named for Charles E. “Chuck” Cakert, an Atlantic City High School graduate and Ventnor resident who died of a heart attack in 1989 at the age of 40 after his last jump shot

“He was playing 1-on-1 in the backyard with my dad,” said Cakert’s nephew Douglas Cakert, 33, of Ventnor, who took over organizing the tournament with Cakert’s son Jonathan when they were 16 years old. “He was winning and had just scored a basket when he walked away  and collapsed. He died doing what he loved.” 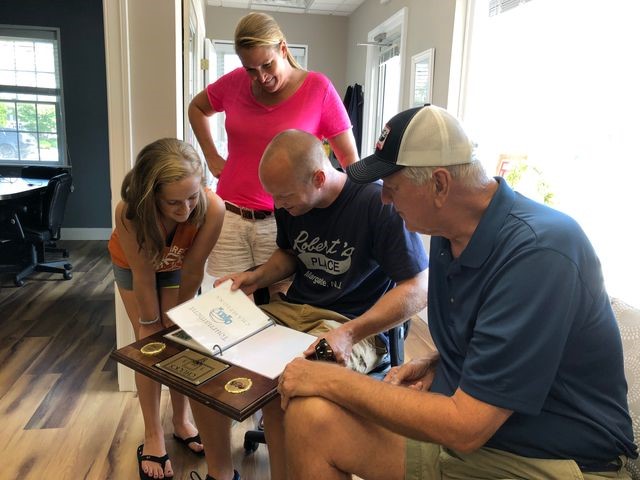 Members of the Sutor family look over photos of tournament winners.

Shortly after Cakert passed, Battaglia, a Ventnor teacher who was running a summer league for Ventnor Recreation, suggested that Cakert’s brother, Thomas “Buck” Cakert, establish the tournament in his honor.

“I grew up with Chuck and when we were thinking of ways to honor him, we came up with the 3-on-3 idea,” Battaglia said. “He was a good guy, very smart and loved playing basketball, whether it was on the street or on the court. We would go over his house and play pick-up games all the time when we were in high school.”

Buck Cakert kept the tournament going for more than a dozen years, some on the basketball court on Surrey Avenue and later in the VECC gym, but it was getting too much for him to run along with his business, so the younger cousins stepped in to keep it going.

“We weren’t even old enough to drive, and here we were organizing the event and getting city approvals,” Buck’s son Douglas Cakert said.

The tournament attracted the best players of all ages from around South Jersey, and some as far away as Boston and Texas. They would come every year, planning their vacations around it, Buck Cakert said.

“It became a tradition with many players returning every year and progressing through the age groups,” Douglas Cakert said.

The tournament allows ballers of all ages to put together teams of four to play 3-on-3 with a highly-competitive spirit just like in the schoolyard, “but with a little more structure” the registration form says. 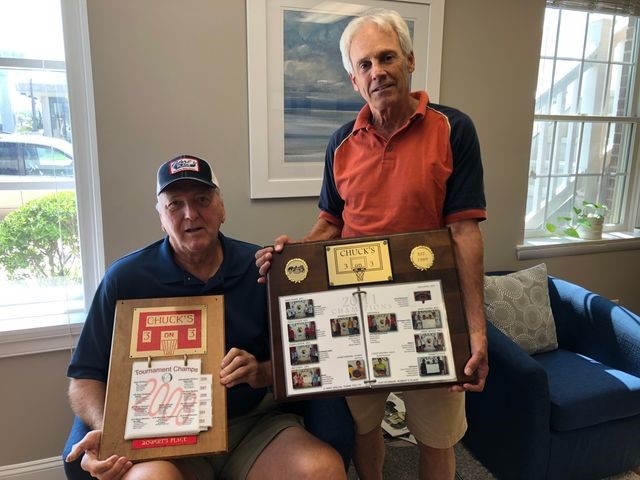 Robert Sutor and Thomas ‘Buck’ Cakert show the two trophies for the Chuck’s 3-on-3 Basketball Tournament.

Robert Sutor of Robert’s Place stepped in to purchase T-shirts for the first tournament and has continued to sponsor the tournament every year. Winning teams get commemorative sweatshirts.

His support pays for about half of the tournment’s expenses, Douglas Cakert said.

“We couldn’t do the tournament without the Sutors,” he said. “Even when we got bigger, they kept sponsoring us.”

Douglas Caker has a T-shirt from the very first tournament that has the Robert’s Place logo on the sleeve. This year’s commemorative T-shirt, made in red and white versions to distinguish the teams, replicates it.

Sutor’s annual gathering at the bar after the tournament will celebrate the tournament’s 30-year run and thank all the family members, referees and volunteers who work so hard to put on the tournament, he said. On Monday, they were planning food options. 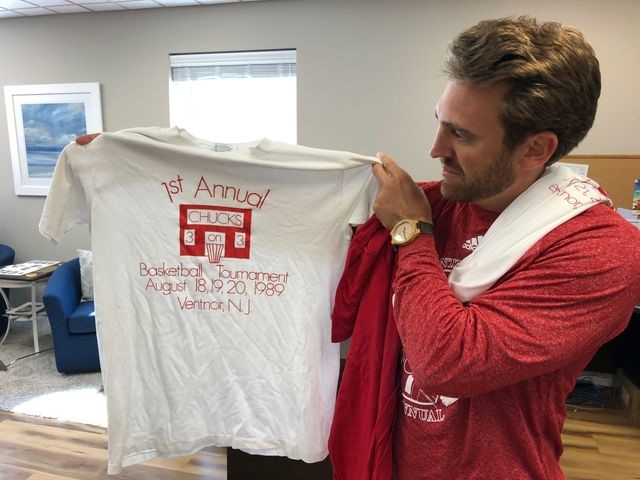 Douglas Cakert shows the T-shirt for the very first Chuck’s 3-on-3 Basketball Tournament.

Sponsoring local sports leagues is another tradition at Robert’s Place. The bar has sponsored beach volleyball, soccer teams and for the last 15 or so years, has been hosting the annual Polar Bear Plunge on New Year’s Day that attracts thousands of revelers.

He explained how the bar came to support the 3-on-3.

Chuck Cakert was one of five siblings, including Buck and Denny, and sisters Barbara, who passed away a few years after Chuck, and Patty. They were close in age and all of them were athletic.

“We got to know the Cakert brothers and they became good friends,” Sutor said. “Their kids have done a phenomenal job organizing this tournament over the years. It takes a lot of work and has been wonderful for the whole area. There were some fine competitions through the years.”

Sutor, who has a towering presence, said, he played in the tournaments when he was younger, then his kids played and now his grandchildren are playing.

His granddaughter Kieran Brewster signed her team up on Monday.

Douglas Cakert, who also played in the tournament as he was growing up, said it started with 20 teams in two divisions and grew to 80 teams in 10 divisions, including boys’ and girls’ student divisions from fifth to 12th grades, men’s, women’s, intermediate and over 40. This year’s tournament offers a “just for fun” category of alumni looking to re-live their youthful days on the court.

Although participation has waned a bit in the last several years, attendance is not the reason for calling it quits, he said.

“Some people are upset it’s going away, but my cousin Jon – he’s Chuck’s son – who helps to run it lives in Virginia and is expecting his second child soon,” Douglas Cakert said. “After 30 years, we had a good run. We might do it again someday, but for now, we’re taking a break.”

Buck Cakert said they wanted to go out when they were still at the top of their game.

“We saw the handwriting on the wall and didn’t want it to peter out, and wanted to go out on a high note,” he said. 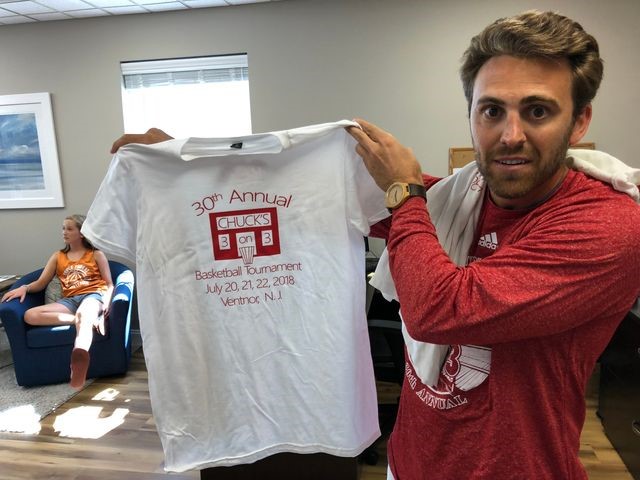 This year’s T-shirt replicates the first.

Although it really wasn’t a fund-raising event and the Cakerts and Sutors just wanted to cover expenses, any proceeds from the tournament over the years supported Ventnor Recreation programs over the years.

“We helped fix up the Suffolk Avenue court, bought equipment for Little League, got jackets for the Ventnor City Pirates after they won the state football championship in 2000 and sponsored scholarships for children who couldn’t afford to pay for the traveling teams,” Douglas Cakert said. “We were very happy to be able to do that.”

Any remaining funds will be used to “help Ventnor Rec spruce up whatever needs to be done to improve the court,” he said. 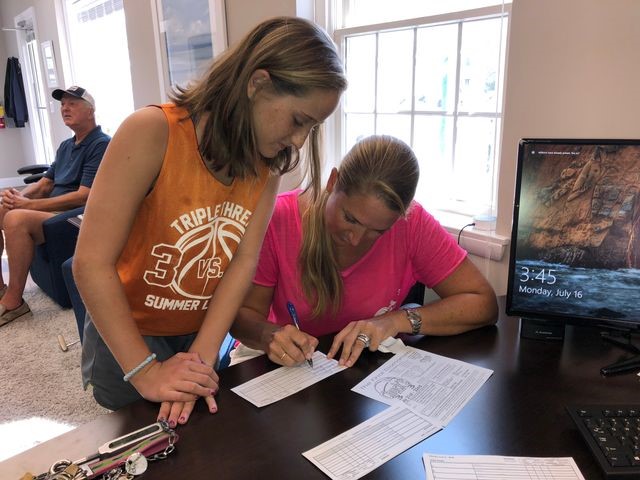 Christine Brewster signs a waiver for her daughter Kieran to play in the tournament.

On Thursday, July 12, the Board of Commissioners approved the organization’s request to memorialize the tournament by placing decals on the backboards at the Suffolk Avenue court.  There will be a small gathering of family and friends Friday night to dedicate the new backboards.

The schedule for this year’s tournament will be finalized on Wednesday morning. Anyone interested in putting a team together can download a registration form at www.chucks3on3.com and bring the registration fee to TC Financial Management Co. on the corner of Atlantic and Essex avenues in Margate, next door to Robert’s Place.