Atlantic City to celebrate 16 years of ‘Thunder Over the Boardwalk,’ Aug. 22 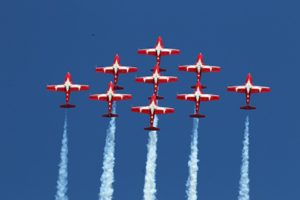 “We are excited to welcome back the U.S. Air Force Thunderbirds, and GEICO to participate in Atlantic City’s signature summer event,” Kelly said. “This year’s show will also include an appearance by the Canadian Forces Snowbirds, which is a great addition to our lineup and makes the Atlantic City Airshow an international event.”

The USAF Air Demonstration Squadron Thunderbirds will perform aerial demonstrations in the F-16C Fighting Falcon with diamond and solo maneuvers performed with accuracy and precision.

The U.S. Army Golden Knights Parachute Team, the GEICO Skytypers and Jim Beasley Jr.’s P51D Mustang demonstration returns to the 2018 lineup. Additional performers include Lee Leets in the Shorts Tucano, Paul Dougherty in the Eagle Aerobatic Bi-Plane, Mike Wiskus in the LUCAS OIL Pitts S2C, and numerous military and civilian flybys. Most of the performers will take off and land at the Atlantic City International Airport, which serves as the host airport for the airshow.

“The CRDA is pleased to support the Atlantic City Airshow, one of the region’s largest events,” said CRDA Executive Director Matt Doherty. “This event attracts spectators to our destination during the midweek and showcases Atlantic City’s great amenities to hundreds of thousands of visitors. Events like this are key components in our efforts to increase tourism in Atlantic City.”

Sponsorship packages are still available. Those interested in becoming a sponsor should contact Michael Chait at 609-345-4524, ext. 102.

Tickets are on sale now for several VIP Viewing Packages at http://airshow.acchamber.com/premium-viewing-vip-packages/