‘Our voices are being heard,’ Margate homeowners say 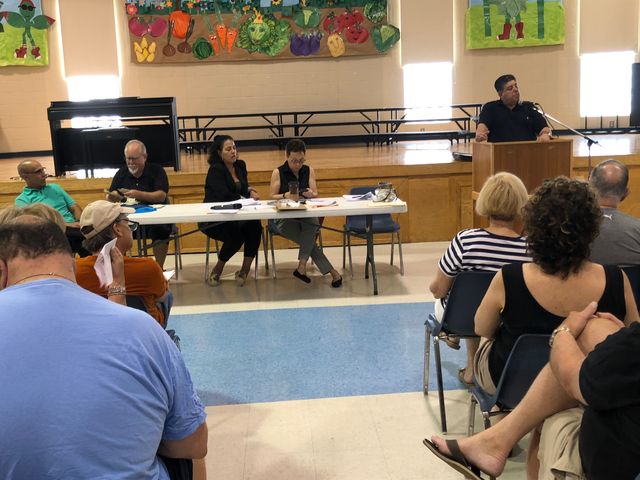 MARGATE- With fewer people in the room for their second general meeting, the leadership of the newly formed Margate Homeowners say their voices are being heard.

About 60 people attended the meeting Saturday morning at the William H. Ross School compared to the more than 300 who attended the first meeting on June 30, to hear President Jay Weintraub say the Board of Commissioners has addressed some of Margate residents’ concerns but increasing membership, not only from summer residents but also from year-round residents who vote, is needed to make the association “bigger and better.”

The organization, which has been in existence for seven weeks, has 541 followers on Facebook and about 250 paid members but only about 50 are year-round residents, Weintraub said.

“In a very short time, our voices are being heard,” he said.

Weintraub said the executive committee would be meeting with the Avalon Homeowners Association which has more than 1,100 dues paying members.

Although two issues the group wanted addressed have been partially resolved, the honesty of public officials is still suspect, according to comments Weintraub made during the meeting.

The dune crossovers were scraped of blowing sand and MobiMats installed at all street ends.

“They kept their promise,” he said.

Bicycle racks will be installed in Ventnor and Margate through a grant, but the city addressed residents’ concerns by installing temporary bike racks attached to the bulkhead at each street end, he said.

He said the beach would be “in better shape” next year after the Army Corps of Engineers completes the project and turns over maintenance of the beach to the city.

Weintraub said he received a telephone call from Mayor Michael Becker about the soon-to-be-proposed aqua park on the Amherst Avenue Bayfront. Several posters to the association’s Facebook page said they believe the park is a done deal with officials agreeing to it in secret.

Weintraub said Becker assured him that no applications or permits had been filed with the city or state to erect the park and that the city only recently learned about it.

“Yet someone in city government spoke to me in December saying if I liked the miniature golf course, wait till you see the water park,” Weintraub said.

He refused to name the official but said the property has changed hands three times in the last several years, most recently selling for $349,000 shortly after the city changed its zoning maps.

Weintraub said there has been talk of the water park “for months and months, yet the mayor knows nothing about it.”

“It’s another back room you should be aware of,” he said.

Weintraub said the group would not take a stand on any issue unless more than 51 percent of the membership agreed to it in a poll on the group’s new website.

The leadership asked members to step forward to serve on committees to keep an eye out for planning and zoning, taxation and voting issues and to organize a community gathering next June.

Marc Alch shared information about his meeting with Police Chief David Wolfson about how to make Atlantic Avenue safer for pedestrians.

Alch said reducing the the speed limit to 25 miles-per-hour has helped somewhat, and that Wolfson supports a “road diet,” with one lane in each direction with a center turn lane to slow traffic and make the road safer for beachgoers, bicyclists and runners.

“Let City Hall know how you feel about it by going to meetings to tell them what you would like to see accomplished,” Alch said.

Linda Novelli said an event to be held the weekend after Memorial Day next year would give residents the opportunity to meet each other and improve security in the city.

Reisdent Al Biloski suggested attaching handrails to the wooden fences to help older folks get over the dune.

Joel Naroff encouraged residents to tell police they should enforce parking violations, especially for those parking too close to the intersections, causing visibility problems.

Another resident said more should be done to enforce the state restriction against smoking on New Jersey beaches, and others said they want the city to enforce beach badge requirements, especially for teens who come to Margate on Memorial Day weekend.

Haverford Avenue resident Alan Liss said it was the first meeting he has attended and that he plans to join the organization.

“I’d like to hear the genesis of the Avalon Association and what they have been able to accomplish,” he said.

The group will meet during the off-season and have two meetings next summer, Weintraub said.