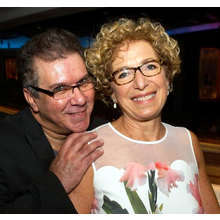 ATLANTIC CITY – She didn’t do it on her dancing prowess, but boy, the girl has friends. Cookie Till, owner of Steve & Cookies By the Bay in Margate, took home the largest mirror ball trophy at the inaugural Dancing Under the Atlantic City Stars event held Saturday, Nov. 3 at Hard Rock Hotel Casino. The event, sponsored by Hard Rock and Tito’s Handmade Vodka, was a fundraiser for the Community FoodBank of New Jersey Southern Branch.

Although she admits she’s not much of a dancer, she vowed to make it the biggest fundraiser possible and asked friends to donate as much as they can by purchasing a ticket to the event, a table of 10, or just giving a $10 donation to vote for her and her partner Joey G. or any of the other contestants.

“I want this to be a blow it out of the water event,” she said in a promo video before she danced.

Till was credited for recruiting many of the 11 other dance couples who were charged with raising $15,000 to be in the contest.

Several agreed that when asked, they “couldn’t say no to Cookie.”

Initially, she just wanted to be on the organizing committee, but “it would have been hard for me to ask people to dance if I’m not in it,” she said.

She scored four 10s and one 9 from judge Howard Eskin, who may now find it challenging to get a reservation at Steve & Cookies on a Saturday night in summer.

In addition to running one of the premier restaurants in South Jersey, Till is known for her philanthropy. She formed her own foundation, A Work In Progress, which supports urban gardens and educates children about the benefits of eating nutritious fresh fruits and vegetables. On Tuesday, Nov. 6, she will host the annual Herb Dinner, which benefits Jewish Family Service’s health and wellness initiatives.

Till said although she was stepping out of her wheelhouse to dance, the real focus is on the FoodBank and its programs, she said the day before the competition.

“This has brought so much attention to the FoodBank,” she said. “This is the first time it’s being done and will be the biggest single-day money raiser for the FoodBank.”

In addition to feeding the hungry – and the need is great in South Jersey, she said – other FoodBank initiatives, such as focusing on healthy eating and getting children good nutrition, even in summer – “is like teaching someone to fish,” she said.

By the end of the night, Till and her dance partner Joey G had raised the most money – more than $110,000 – followed by Michael Azeez and his partner Janet Chapman at $87,000. Margate attorney Lloyd Levenson and partner Carrie Reilly came in third by raising $39,000.

Kowal said she danced to show her two daughters, who attended the event, that they can do anything if they put their minds to it.

The People’s Choice award, representing the most money raised during the event on Saturday, went to Azeez and Chapman whose $10-per-vote total raised $11,110.

After the fundraising totals for each contestant were announced at the end of the competition, the FoodBank will likely receive more than $425,000 to feed the hungry. For every dollar raised, the FoodBank will be able to provide three meals.