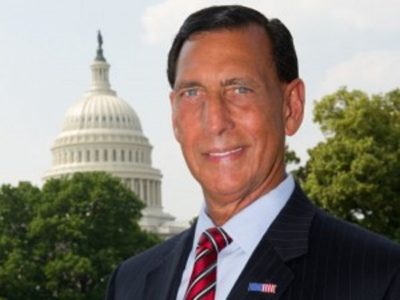 WASHINGTON, D.C. – U.S. Representative Frank A. LoBiondo (NJ-02), a senior member of the House Coast Guard and Maritime Transportation Subcommittee, was honored with naming a Coast Guard authorization bill in his name. LoBiondo applauded Congress’ approval of S.140, the “Frank LoBiondo Coast Guard Authorization Act of 2018,” sending the legislation to the president for his signature. The House passed the bill by voice vote. The Senate approved the bill 94-6 before Thanksgiving.

“So few issues have been bipartisan across the board during my time in Congress but supporting the Coast Guard was always one of them. The men and women in the Coast Guard are always asked to do more with less – finally my colleagues have come around to giving our Coasties more so they can continue their outstanding job,”  LoBiondo said in a release. “It is one of the truest honors of my life to have represented the Coast Guard Training Center in Cape May and Air Station Atlantic City for 24 years in Congress.”

The legislation also preserves jobs by providing regulatory relief for New Jersey fishermen. It eliminates a duplicate requirement that both the Coast Guard and the Environmental Protection Agency maintain discharge requirements for commercial fishing vessels. Previously, senseless and costly EPA regulations left fishermen on the hook for more than $36,000 in daily fines if they fail to get a permit from the EPA to discharge such things as rain water runoff and air conditioner condensate from their vessels, LoBiondo said.

Under the compromise, the EPA would set the vessel discharge standards while giving the Coast Guard the authority to prescribe and enforce regulations based on those standards. LoBiondo ensured a moratorium on imposing such fines on South Jersey commercial fishing operations remained intact for more than a decade as he worked on this compromise.

“Throughout my time on the Coast Guard subcommittee I have focused on strengthening our nation’s maritime sector, a critical source of jobs and economic output. In South Jersey, commercial fishing operations have long been one of the leading employers, making Cape May the second largest port by commercial value on the East Coast. This compromise ensures that the livelihoods of thousands of South Jersey fishermen are no longer threatened by duplicative federal bureaucracy and conflicting arbitrary standards,” LoBiondo said.

A member of the House Coast Guard and Maritime Transportation Subcommittee for the past 22 of his 24 years in Congress, LoBiondo served as the chairman, vice chairman or ranking member for 14 years.

LoBiondo will receive the “Coast Guard Distinguished Public Service Award” at a ceremony in Washington, D.C. on Wednesday, Nov. 28. Admiral Karl L. Schultz, the 26th Commandant of the U.S. Coast Guard, will present the honors at the service’s headquarters.