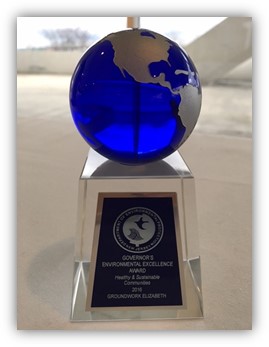 Sustainable Downbeach and the Surfrider Foundation were among 11 recipients honored for various areas of environmental stewardship, from protecting water quality to improving access to electric vehicle charging stations and preserving natural resources announced. They received recognition in the Healthy and Sustainable Communities category.

“This year’s winners exemplify New Jersey’s strong commitment to protecting the environment and following practices that will help us fight climate change and sea-level rise, while also improving flooding resiliency around the state,” McCabe said. “Their fine work is an example to us all, and I congratulate the winners for their outstanding achievements.”

The Governor’s Environmental Excellence Awards are New Jersey’s premier environmental awards recognizing outstanding environmental performance, programs and projects in the state. Including Monday’s event, the program has recognized 180 winners since 2000.

Their efforts included advocating for the passage of a fee on single-use bags in the City of Ventnor and a single-use plastic ban in Atlantic County parks. In 2015, Longport was the first municipality in the state to pass a single-use bag fee. The groups are supporting Brigantine in its effort to pass an ordinance banning the use of plastic bags.

The group was also integral in the 2017 passage of an ordinance banning the intentional release of balloons in Atlantic City, Longport, Margate and Ventnor, and has petitioned the state for legislation on the matter.

Other honors announced include the first Richard J. Sullivan Award, given in memory of the DEP’s first commissioner. The Sullivan Award is given to a person who demonstrates exceptional leadership and outstanding accomplishment in safeguarding public health, protecting and enhancing New Jersey’s diverse natural resources, and creating vibrant, sustainable communities that provide economic opportunity for everyone.

Candace McKee Ashmun, a founded member of the New Jersey Pinelands Commission, received the inaugural award for more than six decades of service to environmental protection and conservation throughout New Jersey.

The DEP received 50 applications for this year’s awards. A panel of judges reviewed and scored the nominations. The DEP, New Jersey Infrastructure Bank, and the New Jersey Corporation for Advanced Technology, in partnership with the New Jersey State League of Municipalities and the DEP’s Environmental Stewardship Initiative, are sponsors of the program.

To learn more about the program, visit www.nj.gov/dep/eeawards/.