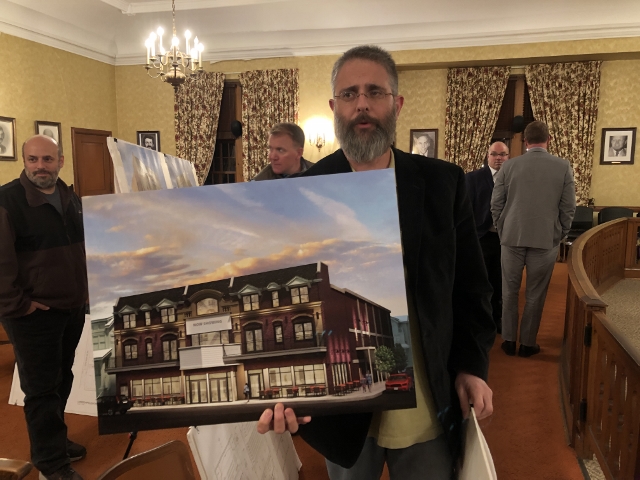 Santa delivered an early Christmas present to the city, which is now much closer to seeing its longtime dream come true. The Planning Board Wednesday, Dec. 12 approved all the necessary variances, waivers and conditions for Ventnor Theater, LLC to rehabilitate the old Ventnor Twin movie theater and turn it into a state-of-the art multiplex and burger restaurant.

Commissioner Lance Landgraf called the project “transformational.” Planning Board Chairman Jay Cooke called the developers “champions of the community” and said the theater project would “provide a better self-image” for the city. Board member Dan Smith called it “monumental” and said it would be “a cornerstone that will ripple through the city.” And, 20-year board member Lorraine Sallata said it would “put Ventnor on the map.”

The board’s planner, Roger McLarnon said the project fits the city’s 17-year-old Northeast Ventnor Redevelopment Plan to a ‘T.’ All of the uses proposed for the gutted theater building were suggested in the original 2001 redevelopment plan, including a movie theater, café, restaurant and parking. 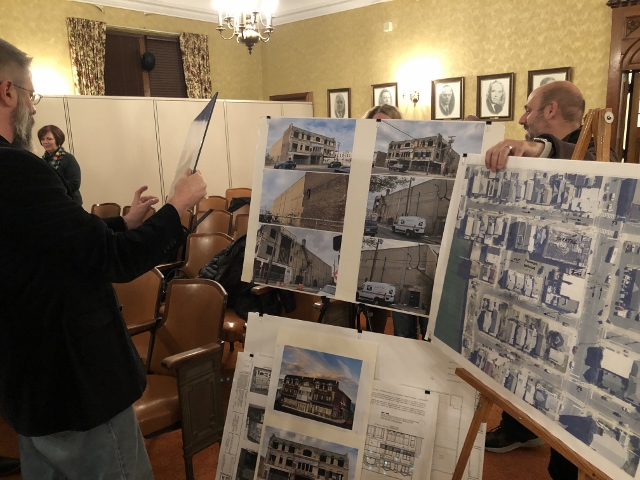 Although they support the redevelopment of the theater, several residents expressed concerns about traffic flowing through their residential neighborhood and a potential loss of parking spaces.

Scott Bluth, who lives on Little Rock Avenue, said it would be “impossible” to park near his house during the summer months.

“I don’t know what the solution is, but it will be a challenge for us,” he said.

Winchester Avenue resident Dan Potts said he loves what the theater will become, but residents in the area will be negatively impacted considering the number of patrons and employees using the building.

Landgraf said the Board of Commissioners is looking at the area and may consider permit parking for residents or remote parking with trolley service. 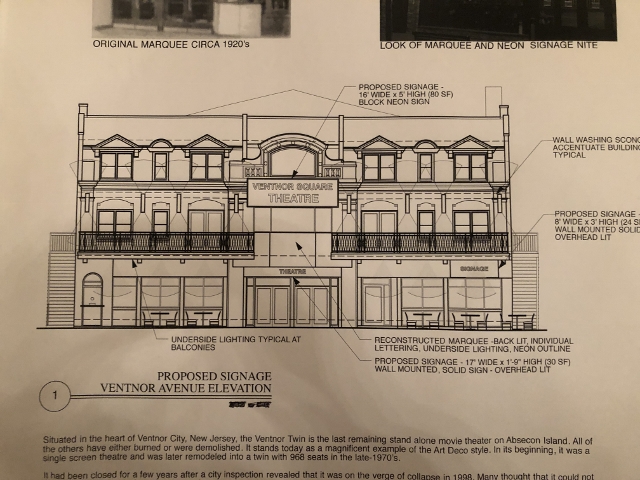 However, the acquisition of an adjacent building that was demolished and another smaller vacant lot in the rear of the theater, along with reducing the number of theater seats from 968 when it was a single theater to 571 makes for a 41 percent decrease in intensity, Ventnor Theater attorney John Ridgeway said.

The theater owners also eliminated other businesses that were located on ground level, which will reduce vehicular traffic to the area, and are adding 17 parking spaces, including one ADA accessible spot on the property. Entrance to the parking lot will be on Ventnor Avenue and through a right-of-way behind Sack O’Subs, while the exit will be on Winchester Avenue.

The plan includes one larger theater seating 272 people and two smaller theaters seating 84 and 89 people. The second level will contain a soaring two-story high restaurant operated by E.J. Dougherty of Cape May Courthouse, who owns several other restaurants in the South Jersey area, including at the Harbor Square Theater in Stone Harbor which is also owned by the developers. 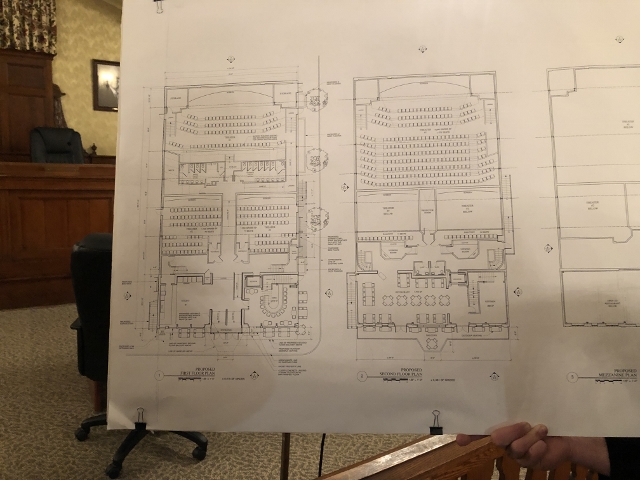 Managing partner Clint Bunting credited his partner Brett DeNafo, who grew up in Ventnor, with providing the vision for restoring the theater, just the way they did in Stone Harbor.

Stone Harbor was so impressed with what the Harbor Square Theater has done to revitalize its downtown shopping district, especially in the off-season, that it named Bunting its “Citizen of the Year,”

Bunting said DeNafo convinced the partners to take the risk on Ventnor. Winning the bid on the second liquor consumption license ever offered in Ventnor provided the impetus for realizing DeNafo’s vision.

Although, rehabbing the 1920s era building “was a little harder than we expected,” Bunting said. 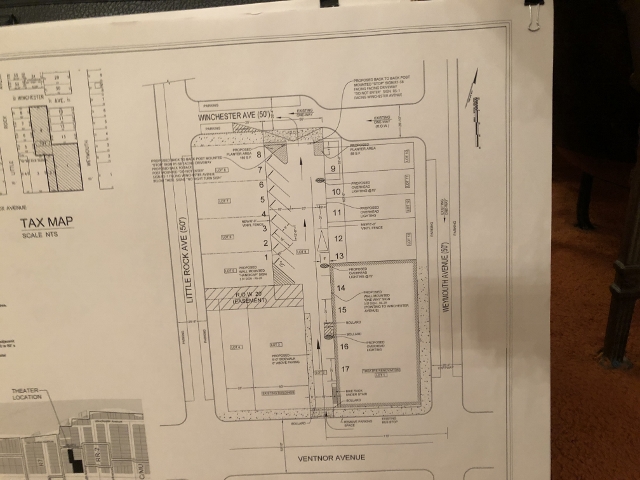 Architectural drawing shows the entire site, including ingress, egress and parking at the rear of the Ventnor Square Theater.

After the building was gutted, they realized the front façade was pulling away from the sides of the building.

“We had to put in $185,000 of emergency steel” to shore up the building, he said. There was an additional unexpected expenditure of $85,000 to remove two oil tanks.

Their mission is to provide a facility with “safety, cleanliness and aesthetics” in mind, Bunting said.

The project includes balconies overlooking Ventnor Avenue where diners can enjoy a burger, along with sidewalk seating. The staircases were preserved and an elevator installed to take diners to the second floor restaurant.

The project was granted preliminary and final major site plan approval and several variances for lot coverage, and the size, height and width of signage.  Because it is considered unique and site-specific, no variance was needed for the marquee, officials agreed. Variances were also granted for street trees. Twenty were required, but the developer is proposing landscaping instead of locating street trees under utility wires.

Because it is an iconic structure, the project received a waiver from design standards outlined in the redevelopment plan. The applicants agreed to work with McLarnon to fulfill certain conditions, such as deciding the location of the loading zone for restaurant deliveries, the type and location of landscaping, and the location of the handicapped spot, which should be as close to the theater’s main entrance as possible. Ridgeway said.

Security includes installing a 6-foot fence around the rear of the property, down-lighting in the parking lot and security cameras throughout the building and parking lot.

“The light will not reflect into the residents’ homes,” Bunting said.

“Twenty years ago, you couldn’t give this building away,” resident Joe Schaffer said. “For these guys to come in and invest millions of dollars, we are very appreciative. It’s like rebuilding the Ventnor boardwalk after the 1962 Storm. It’s a very ambitious project.”

Board member Greer Gaskill said he cannot wait until the theater opens, and wants to be one of the first to watch a movie on the Ventnor Square silver screen.

“I had my first date with my wife in the Ventnor Twin theater,” he said.