Letters from around the world The ornate Teatro Heredia dating to 1911 remains one of the cultural centers of Cartagena.

Cartagena de Indias, Colombia’s port city. She’s rich in history, she’s full of wonder. Ah, her name even makes me shiver. Karen and I arrived this morning – our fifth stop of our world voyage – and since stepping ashore, I’ve been conjuring images of Michael Douglas with Kathleen Turner and Danny DeVito.

And that’s where we are now – Old City, a district surrounded by an ancient wall, parts of which were constructed in the late 1500s – ready to take a horse and buggy ride.

Karen grabs my hand, and hops into the carriage. Wiping my brow, I climb up and plop down beside her. Thank goodness the faux leather seats are white. Any other color, we’d be toast because it’s hot here. Hot as Hades. A wicked sun has the mercury pushing 32 Celsius – 90 degrees Fahrenheit. And the humidity, well, it’s stifling.

“You think the horses will be okay in this heat?” Karen asks, eyeing the other carriages.

I nod my head yes and zero in on our driver, a kid no older than eighteen. Dressed in a long-sleeved white shirt with black vest, he’s got to be hot.

Usually, my greeting triggers a response, but he’s occupied. His thumbs are working a cell phone in his lap.

“This might not be the tour of tours,” I say to Karen. “I think our driver’s a cell phone junkie.” A statue of Venezuelan hero Simon Bolivar astride his stallion is a centerpiece of the plaza.

The carriages behind us are filling up. A German woman asks to join us. Of course, we say yes. This is the last shore excursion of the day. Queen Victoria sails at four.

Before long, the clop, clop, clopping of horses’ hooves beats louder than the whining traffic; and after a stop-and-go here, and a stop-and-go there, our caravan snakes through a lone archway, and we’re inside the walled city.

Founded in 1533 by Spanish conquistador, Don Pedro de Heredia, this Caribbean port was established as a treasure vault for plundered gold and silver. And yes, emeralds, too. Loot was stashed here for months until Spanish galleons could safely transport it home. Hence, the eleven kilometer wall. Marauding pirates, ones like Sir Francis Drake, had to be kept at bay.

Hugging the thick limestone/shell barrier – the wall was built in stages during the 16th, 17th, and 18th centuries – we trot up a skinny street to an array of shops.

“Las Bovedas,” our driver calls out. His accent is heavy, I can barely make out his words.

“What did he say?” asks Karen.

He says these are the dungeons, and I point to a black dot on my Cartagena map. We’re in Barrio de San Diego, a shopping district, where 23 prison cells, actually carved into the infamous wall, have been converted into one room stores. Outside the cell doors colorful crafts and souvenirs beckon tourists.

Moving on, we pass a massive white hotel. “Santa Clara. Five stars,” yells our driver. He holds up his hand, spreading his fingers.

I search my map until I find a dot marked Santa Clara. “This place was once a convent,” I say. “Convent of the Nuns of the Order of St. Clare.”

Further along: Paseo de la Muralla. Known to locals as Lovers Lane, this walkway once housed a battery of cannon. Folding my map, I announce rather boastfully, “You know, if I hadn’t brought this, we’d be completely clueless.” A horse and buggy ride through narrow streets affords an intimate view of the city.

Through the squared-off openings where cannons once bombarded pesky marauders, I catch sight of the turquoise Caribbean, sparkly and shiny.

Out front the Teatro Heredia, our carriage stops briefly while the others catch up. Convinced I’m now our official tour guide, I tell my two compadres that the theater opened in 1911 and that it remains one of Cartagena’s main cultural centers.

“Who cares?” says Karen. “Why don’t you admire its pinkish hue?”

I aim my camera at the ornate structure with its big doors and click away.

The reds and purples catch my eye. My map lies on the carriage floor wedged between my feet. The area reminds me of Old Havana.

Then out of nowhere, a Danny DeVito look-a-like, a young one at that, storms our carriage. We’re outside Plaza de Bolivar. Karen grabs her purse, afraid it might disappear. I do a double-take expecting Michael Douglas to appear. Wooden balconies perched above the streets are adorned with colorful bougainvillea.

Balancing a stack of hats taller than a chimney, DeVito’s spitting image shoves a fedora in my face. A white Colombian one, complete with black band. “For you. Five dollars,” he shouts. His sweat stained shirt clings to his chest.

“Buy it,” says Karen, laughing. “You can wear it to Happy Hour back home. Your drinking buddies will love it.”

DeVito’s offer dances in my head. And, so does an image of me sipping martinis bar side at the Tuckahoe Inn with a white fedora dipped low over one eye. But who am I kidding? The hat’s more befitting a cigar chomping drug lord than yours truly.

“No gracias,” I say, politely.

“No gracias. No gracias,” I repeat.

Finally, he backs off. Scowling, he walks away.

A statue of Simon Bolivar straddling a stallion now commands our attention. “See, his horse isn’t panting,” I say to Karen. She rolls her eyes. I can’t tell if the Venezuelan hero – without him Colombia and Venezuela would probably still be under Spanish rule – is carved from stone or molded from bronze. Simon and his horse are shaded by trees midway across the plaza.

Bordering the square are some colonial-style buildings—one is the Palacio de la Inquistion. Completed in 1776, this stone edifice, with its balconies and gateway, proudly displays an assortment of thumb screws and body racks; and other S&M toys – so says my little guide book. 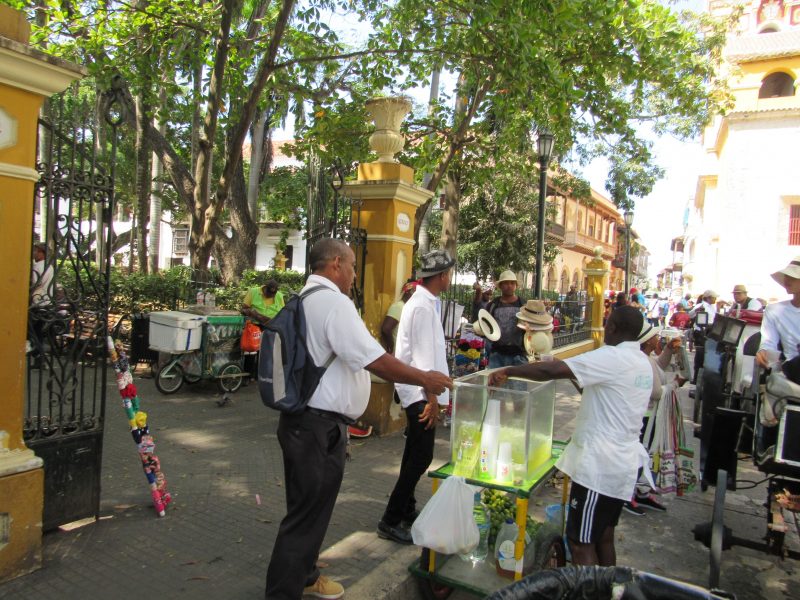 By the far corner of the plaza, is – you guessed it – a church. Simply called the Cathedral, its foundation was laid in 1575, yet it wasn’t finished until 1612. Sir Francis Drake demolished it in 1586.

The madness wanes when we reach Plaza de los Coches – Plaza of the Carriages – where the old slave market used to be. Here a landmark clock tower rises above the old city’s main entrance, across from a Hard Rock Café. We stop beside a stone statue of Conquistador Don Pedro de Heredia, Cartagena’s founder. There aren’t many people around so I get out and snap his picture.

We’re about to leave when an elderly lady steps from the shadow of Don Pedro’s statue. A fruit bowl adorns her head. No lie, a fruit bowl! She’s a palenquera, a fruit vendor. Our eyes meet; I motion her over.

Dressed in flowing blue, yellow, and red garb, she hurries toward me, probably thinking I’ll buy one of her pineapples, or mangos. When she realizes I want a photo, she smiles, then twirls about, swirling her dress like a beauty queen. I fire away then slip her ten bucks. Beaming, she walks off. And, why not? She just got thirty thousand pesos and still has all her fruit.

The local entrepreneurs are still hustling as we leave the plaza. This time a young boy of about fifteen jumps onto our carriage. Several dozen leather purses swing from his shoulder, maybe more. Balancing himself on the carriage foot-step he shows his wares. “You like?” he says to Karen. “This one, ten dollars.”

Then to the German lady: “You like? This one, only fifteen dollars.” He’s hawking three different sizes. She shakes her head no. He disappears.

Back by the dungeons our ride ends, and after moseying through the shops, we board our bus back to the ship. The air conditioning feels great, I’m a sweaty mess. Karen’s perspiring, too. “Well, did you like our little spin back through time?” I ask her. Neither of us are really true history buffs.

“Yeah, it was just fine,” she answers, smiling. “I’m happy all the poor horses survived.”

PS: Tomorrow we transit the Panama Canal – the Eighth Wonder of the World. 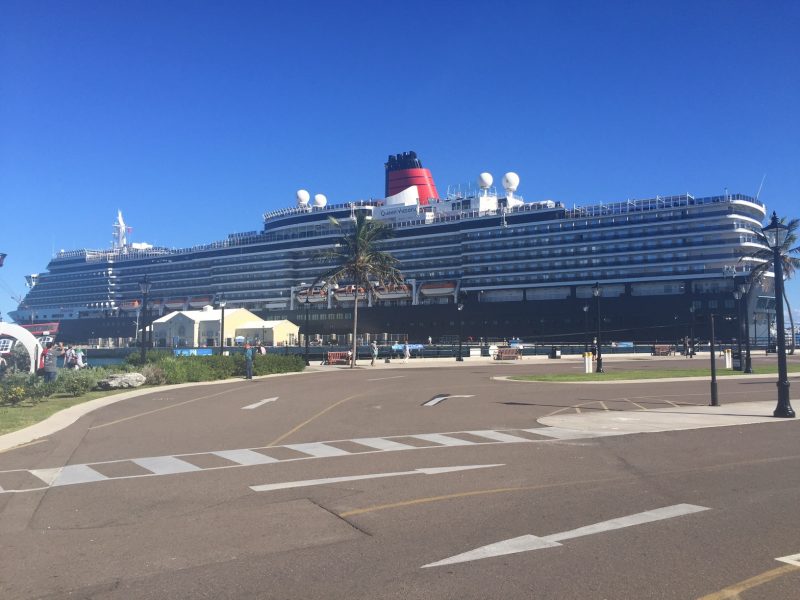 Author Henry Bender and his wife, Karen, will next pass through the Panama Canal on their 121-day, around-the-world voyage aboard the Cunard passenger liner Queen Victoria.

Editor’s note: Henry Bender, of Ocean City, is a retired Ocean City High School English teacher turned full-time writer and global traveler. His seashore-themed book, “Stirring the Dust,” is a compilation of his articles and columns that appeared in newspapers and other publications. Accompanied by his wife, Karen, he is writing a first-hand account of his around-the-world cruise aboard the Queen Victoria for MediaWize/OCNJDaily.com. This is the second of five articles. 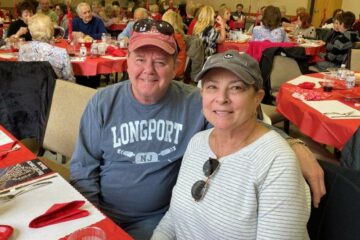