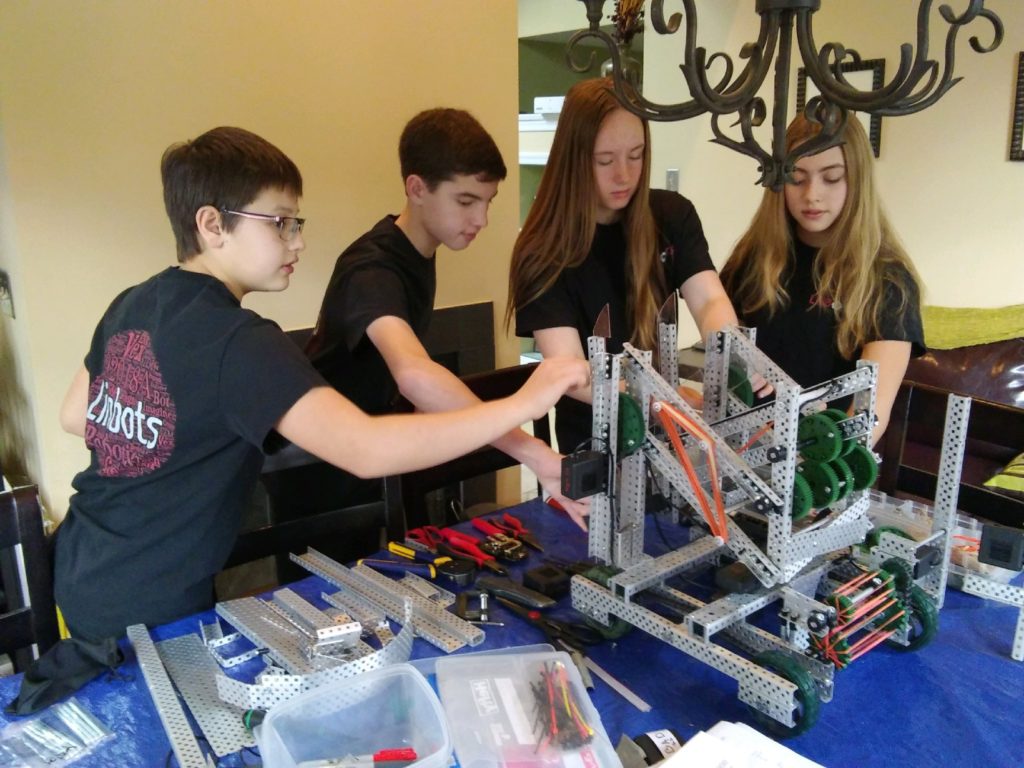 Team Linbots work together Feb. 15 to make sure their robot is ready for a competition. From left, Alex Savov, Nate Fontana, Farley O’Brien and Emma Savov.

A group of Mainland area middle school students who formed their own robotics club are taking their talents to another galaxy.

Well, not really. But they are heading to Louisville, Kentucky, for the VEX Robotics World Championship competition at the end of April.

The Linbots, aptly named since four of the five members live in Linwood, won the Middle School Excellence Award, beating out another middle school at a Feb. 23 state competition in Millville.

Their parents have set up a GoFundMe page to help finance their trip.

Emma Savov, 14, her brother Alex, 11, and Farley O’Brien, 13, all of Linwood, and Nate Fontana, 13, of Somers Point, worked together over the last year to create a robot that they use in competitions. The robot is called 92018A, named for the date the team started building the robot.

The world competition that the team has been preparing for entails several tasks, including guiding a robot down platforms, around a course and everything from balls and plastic caps are maneuvered by the kid-made machines. Judges score the teams.

According to the VEX Robotics website vexrobotics.com it is the largest and fastest growing middle school and high school robotics program globally with more than 20,000 teams from 50 countries playing in more than 1,700 competitions worldwide. Each year, an engineering challenge is presented in the form of a game.

Specifically, the Robotics Education and Competition Foundation seeks to increase student interest and involvement in science, technology, engineering, and mathematics by engaging students in hands-on sustainable and affordable curriculum-based robotics engineering programs across the U.S. and internationally, the website states.

Here is a Feb. 15 demonstration of the Linbots robot:

Linbots won three competitions over the past year. The last one led them to qualify for the world competition. They will join other middle and high school age students for fierce, but friendly competition.

The competition is designed to showcases the young talents and their knack for engineering, problem solving and collaboration, the website states.

In an interview Feb. 15, Nate, Farley, Alex and Emma, explained their love of engineering and science.

Nate said he wants to be an aerospace engineer and Farley may want to be an engineer like her parents, Liz and Kevin O’Brien. She also likes writing. Emma likes the design aspect of the work and Alex said he likes marine science. They said they enjoy working together to create projects. They learn from each other since they all have specific strengths, they said.

For the Linbots, who created their own team because their schools did not have one, arriving at the world championship has a particular significance.

Not only did they excel among children their own age, but also against students in high school.