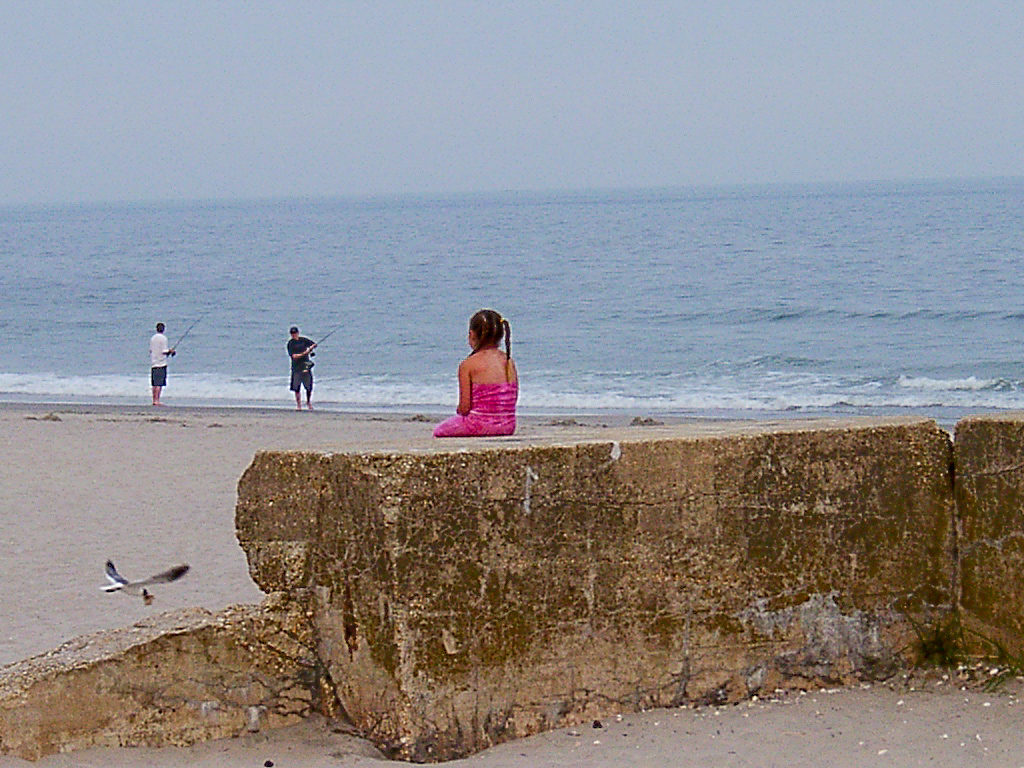 Little Lindsey Borow contemplates her future while sitting on The White Rock.

MARGATE – A contractor for the U.S. Army Corps of Engineers has completed construction of five outfall pipes designed to carry stormwater from Margate beach-block street-ends to the ocean.

The pipe installation was a permanent fix for excessive ponding that occurred behind the newly constructed berm and dune system during a severe rainfall in July 2017. The Army Corps and NJ Department of Environmental Protection worked with the city to design a permanent outfall system to replace Margate’s rudimentary system, which drained rain water onto the beach. Public Works would then dig trenches to allow the water to flow into the ocean.

The job included installation of a lateral manifold system and five 48-inch outfall pipes and at Vendome, Nassau, Kenyon, Franklin and Douglas Avenues. Walters Marine Construction Inc. was awarded the contract to do the work.

Construction of the outfall system started in February 2018 but was halted for the summer. The work picked up again after Labor Day and continued through fall and winter. According to Army Corps spokesman Stephen Rochette, the final outfall pipe at Douglas Avenue was completed on March 8, but additional work is needed before the city takes over maintenance of the system.

“There’s some minor remaining work and we expect to conduct an inspection with NJDEP and Margate where we turn over the outfall system in late March or early April,” Rochette said. “Additionally, checkmate valves are being fabricated and delivered and will be installed at a later date.”

He said that additional work would have “minimal impact” on use of the beach. 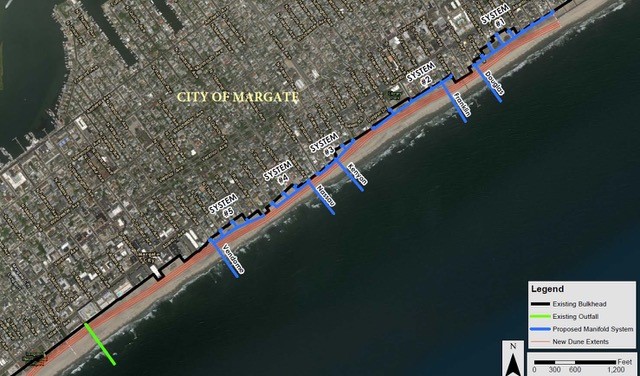 Meanwhile, city officials are still trying to get the DEP and the contractor to complete additional work that includes construction of three vehicle access points, additional pedestrian crossovers and removal of “white rock,” an iconic piece of concrete at the foot of the dune at Douglas Avenue that has been a magnet for children playing on the beach for generations.

“There was a delta of about $110,000 over,” however, the costs projected by Walters Marine are on the high side, he said.

Some of the items on the list were double what he would estimate, he said.

Some paving could be eliminated to reduce costs to get it within the budget, Dennis said.

Commissioner John Amodeo said the estimated cost of removing white rock is about $30,000.

The city was also slated to meet with the DEP on Monday to negotiate costs for the wish list work so the rock could be removed, the project finalized, and equipment removed from the beach.

“We have to keep in mind we have a timeline,” Mayor Michael Becker said. “They have to get off our beaches because we promised the people that. It’s been three years already. It’s very important that we convey that message to them.”

On Monday afternoon, Rochette said the ACE would negotiate with the contractor to remove the rock, but there is no timeline for removal at this time.

The city is also trying to determine who is responsible for trimming protruding bolts on the outfall pipe cages that could pose a danger to beachgoers trying to cross over the pipes.

Dennis said the ACE’s specifications provide instructions on how to cut and coat the bolts.

“We have to address it and get a firm answer from them,” Amodeo said.

Fire Chief Dan Adams said he would write a letter from the Fire Department stating the protruding bolts are a public safety issue.

Rochette said the ACE provided the city with information on low-cost options to cap the outfall splice joints and it is up to the city to consider how to move forward.

“It’s not being done as part of this contract,” he said.

Public Works Supervisor Frank Ricciotti said the department would start scraping the crossovers this week and start raking the beach in April.

“Then we’ll bring out the trash cans and Mobi mats,” he said.

The blue mats will be located between the bulkhead and the toe of the dune. Handicapped access points will have an additional Mobi mat on the beach side of the dune, he said.