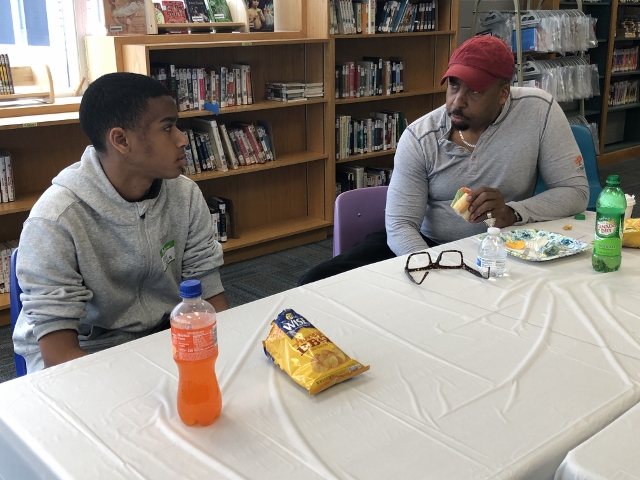 Eighth grader Oldis Zapata talks with illustrator and artist E.B. Lewis during an author visit at the VECC Friday, March 29.

VENTNOR – Students at the Ventnor Educational Community Complex got a rare treat Friday, March 29, when they met renowned “Artistrator” E.B. Lewis during the school’s annual author visit program. It was Lewis’ second visit to the school. He first visited the school in 2009 and a piece of his artwork from that visit is on permanent display in the newly remodeled and spacious library.

Lewis has illustrated more than 70 children’s books and is the recipient of numerous prestigious book awards, including the 2004 Caldecott Honor Award for illustrations in Jacqueline Woodson’s “Coming on Home Soon” and the Coretta Scott King award for Nikki Grimes’ “Talking About Bessie,” among many others.

Student Ashley Gallardo, who is in the seventh grade, said students prepared for weeks before his visit.

“We read some of his books and got a fact sheet of information. Each student was responsible for remembering one fact. I got that he lives only 30 miles away in Folsom,” she said.

Oldis Zapata, who sat next to Lewis during a special luncheon with select art students, wanted to ask about Lewis’ experiences learning art at Temple University in Philadelphia. 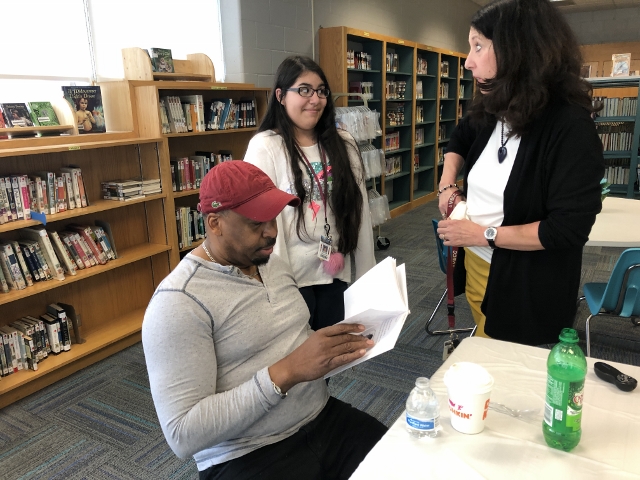 Librarian Debbie Brahmi said she has been organizing author visits every year since she started working at the VECC in 2001.

“It was the first thing Principal Rob Baker asked me to do. We do it once a year for kindergarten through eighth grade, but occasionally we do a second for just the middle school if our budget allows,” she said.

Brahmi stocked up on a variety of Lewis’ books, which she distributed to classroom teachers before the visit.

“We read as many books as we can in the library, and I send out emails to the classrooms with photographs of his artwork to keep it in their minds ahead of his visit,” she said. “We are very lucky to have such a prominent artist in our own backyard.”

Children lined up in the library between assemblies to purchase a book and get Lewis’ autograph.

Students asked questions during the luncheon about his artistic process, including how creating art makes him feel.

“It changes, but when it’s really good, I feel connected to the universe. It’s not like that all the time. Sometimes you can’t miss being in the zone, but other times it’s like I have to suit up to slay a dragon, a fire-breathing dragon whose job it is to destroy everything I do.”

He relayed a similar message during the middle school’s assembly – that anyone can take the easy road, which offers no sense of accomplishment, or take the more challenging road that makes you discover what you are made of, he said.

“When you talk to people, they don’t want to hear what was easy for you, they want to hear about your struggles and what you survived. That’s the beauty of life,” he said. 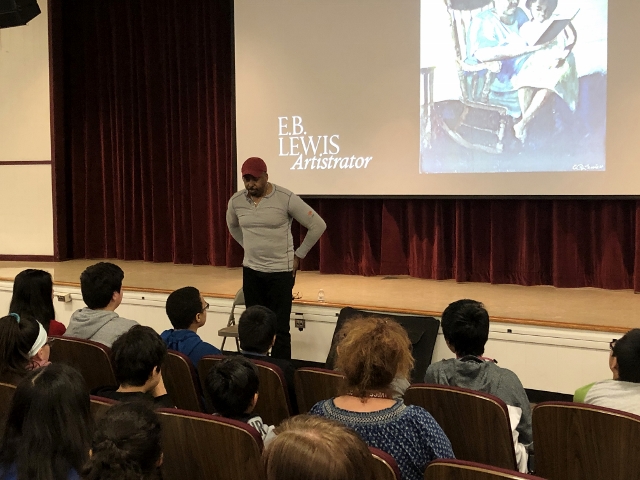 He talked about being “the worst kid in school” and a disappointment to his parents who died before they could see him become a successful artist who makes as much money doing what he loves to do as any doctor or lawyer. He was bullied in school for being a stutterer and having dyslexia, and failed the third grade, he said.

He credits an uncle, who drove him from his home in the Frankfort section of Philadelphia to Temple University Saturday Morning Art League every week for six years, for his success in life.

“He cared. He allowed me to find out what makes me happy,” he said.

He later attended Temple’s Tyler School of Art for illustration and graphic design and obtained a teaching degree. He has taught in elementary and high school, and now teaches university students.

In a brief discussion about his art process, Lewis shared that authors seek him out and that he uses live models for all his paintings. He travels the world to photograph in live action the scenes created in the minds of his authors and then paints them in his favorite medium – watercolor.

He said he likes the unpredictability of painting with water, and loves the ping of the paintbrush, “like the clinking of crystal,” and the transparency of the paint.

“I love how the light hits the paper and dances back and forth,” he said.

The father of three sons is an avid fisherman, mountain biker and skateboarder, he said.

“I paint life,” he said. “There is a hugging scene in all of my books.”

One student asked who were the most famous authors he has ever worked with.

Lewis calls himself an “artistrator” because he not only illustrates books, but also creates his own art masterpieces, many of which are displayed in museums around the country.