Dog Beach is where canines catch the waves 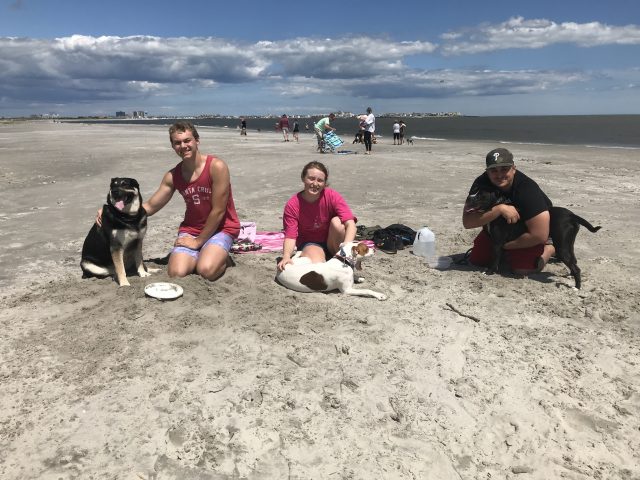 It was a dog day afternoon at Dog Beach.

Friday afternoon’s brisk winds and temperatures in the low 70s were not optimal beach day conditions for humans. That did not stop about 30 people and a dozen pooches from enjoying the area’s only dog-friendly beach.

“This place is like a really nice dog park, but with a beach attached,” said Leon Rickards of West Deptford. “It’s a really nice area to visit. We like it and the dogs like it.”

Rickards was there with his wife Judie, daughter Brielle, and friends Kenny Chunga and Nancy Pritts, and their pooches Nuggets, a corgi, Riley, a beagle mix, and Snickers, a Shih Tzu.

“It’s great to have a place where family can come and bring the dogs along so they are not excluded,” Rickards said, adding that the dogs are part of the family.

Officially named Malibu Beach, a wildlife management area operated by the New Jersey Department of Environmental Protection, other aspects of the nearly mile-long area are murky.

It’s located within the boundaries of Egg Harbor Township, although most users come from Ocean City, Somers Point and the Downbeach area of Absecon Island that includes Longport, Margate and Ventnor.

The beach is known by different names to different groups of people. Locals and seasonal visitors refer to it as Longport Dog Beach, Somers Point Dog Beach or by the official title of Malibu Beach. For most people, it’s simply called Dog Beach.

Messimo Megliari, a Margate resident who was at Dog Beach with daughters Addyson and Sydnie, and their spunky cavapoo Duncan, said the visit was all about their four-legged friend.

“Our local dog park is nice, but so small compared to this,” he said. “The people here are friendly and the dogs are nice. It’s a social time (for Duncan). He thrives here. It’s a place for him to run and jump and socialize.”

Located at the foot of the Ocean City-Longport Bridge, local agencies have shared in the upkeep of the quirky beach. The summer before last, Ocean City reached an agreement with the state to remove trash at Dog Beach, even though it is located in Atlantic County. 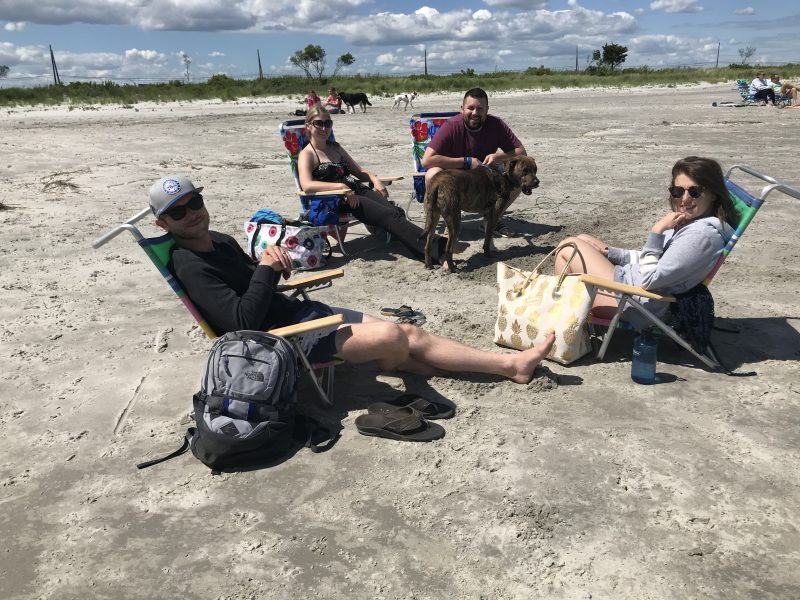 Matt Wickman and wife Amanda with Socks, and Jordan and Michelle Wadley (foreground).

The summer before that, Dog Beach’s future seemed uncertain when trash cans were stolen from the facility and visitors’ trash and refuse – mostly dog waste – mounted up. The Cape May County Bridge Commission had previously handled trash pickup, but as the popularity of Dog Beach increased, so did the volume of waste.

The Bridge Commission understandably bowed out of the chore, as Dog Beach is outside of its jurisdiction. The state’s response was to warn visitors it would close drive-in access to the beach if users didn’t do a better job of removing their own trash.

All that seemed to be a distant memory on Friday afternoon. Visitors seemed to be heeding the state’s signs urging them to take trash and refuse and “pack it out” of the area. 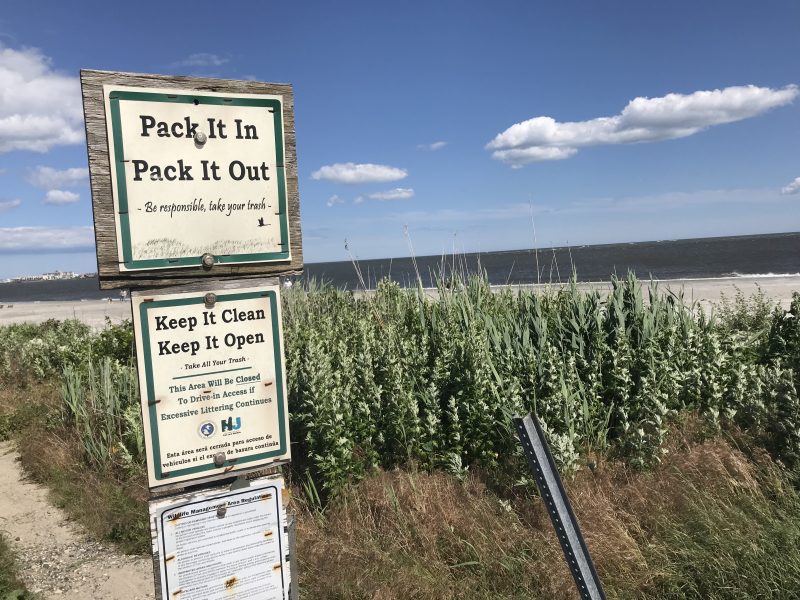 Malibu Beach is a “pack it in, pack it out” park popular with the pups.

Dogs receive the bulk of the attention focused on the small stretch of inlet beach.  However, it is a prime nesting area for migratory and nesting birds, according to a Department of Environmental Protection website.

About half of the beach is roped off and off-limits to dogs and their owners, to protect a nesting area for indigenous bird species, including red-winged blackbirds and “black skimmers,” a black and white bird that flies along the surface of the inlet waters and skims its beak for food.

For Matt Wickman and wife Amanda, their hound mix Socks, and another married couple, Michelle and Jordan Wadley, Dog Beach was a place to chill, and one they appreciate.

“This is our first time (at Dog Beach),” Amanda Wickman said.

The foursome, from Phoenixville, Pennsylvania, were staying at a dog-friendly bed and breakfast across the bridge in Ocean City.

“We’re here for a wedding and decided to make a long weekend out of it,” Amanda Wickman added. “We were recommended to come here and we Googled it.

“It’s a relaxing way to come to the beach and let (Socks) off leash,” she continued. “It’s a nice setting with the beach and the bridge in the background. We’re happy we could find a dog-friendly beach so close to where we’re staying.”