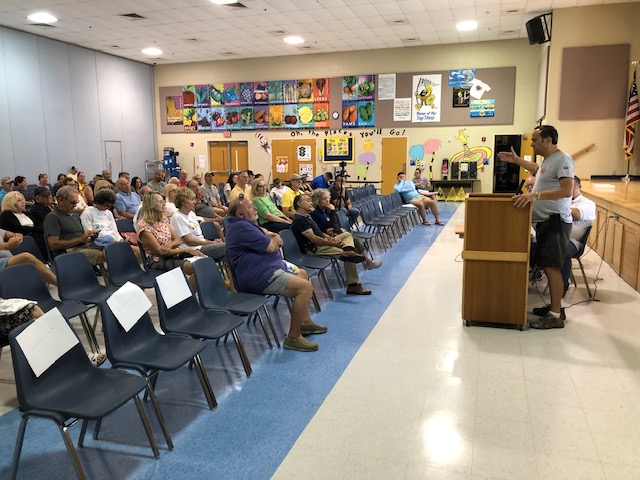 Lucy the Elephant Executive Director Richard Helfant addresses about 75 people who showed up for the June 29 Margate Homeowners Association meeting.

MARGATE – No one knows for sure how she got her name, but Lucy the Elephant is a boy, Save Lucy Committee Executive Director Richard Helfant told about 75 members of the Margate Homeowners Association, many of whom were attending their first association meeting, Saturday, June 29. Margate’s beloved Lucy is an Asian elephant, and in that species, only males have tusks, he said.

That and other tidbits of history were shared with the “rabble-rousing” membership of the HOA, who have expressed concern over the past year that the city might evict its world-renowned historical attraction.

“Contrary to what you may have read in the papers and on the internet and social media, Lucy is not leaving Margate,” Helfant said. “Yesterday, the city solicitor sent to us what we hope is the final draft of a new lease that will protect Lucy and the Save Lucy Committee forever.”

Helfant thanked attorney and Save Lucy Committee board member Bill Subin for working with the city to hammer out the lease, the terms of which were disclosed in a recent Downbeach.com report.

The 20-year lease contains a 5-year renewal clause, which if signed by both the Save Lucy Committee and the Margate City Board of Commissioners on July 14 and July 18 respectively, will ensure the National Historic Landmark will have a 20-year lease in perpetuity, and that the city cannot include her in any development deals without the express written consent of the Save Lucy Committee, Helfant said.

“Decatur Avenue is her home,” he said.

He also confirmed that language in the lease acknowledges that the City of Margate owns the structure, but the issue could be visited in the future.

“In my heart, I feel the non-profit should own the monument,” Helfant said. “But it really doesn’t matter at this juncture. What matters at this juncture is that we have a secure lease, which enables us to apply for grants, and ensure that Lucy is here in Margate forever.”

Helfant said the five members the Board of Commissioners will appoint to the 15-member Save Lucy Committee Board of Directors will be required to actively support Lucy by volunteering in the gift shop, helping with maintenance, doing fundraising or offering financial support. They will serve 2- or 3-year terms and could include only one of the commissioners, he said.

Also rumored in the community is that the commission is trying to unseat Helfant, who has been involved with Lucy since he was 13 years old. His contract as executive director is due to expire at the end of 2020, but he hopes to be reappointed, he said.

“We have done a great job, not just me, but our staff and volunteers have done an amazing job of putting Lucy on the world stage,” he said. “I believe my position is safe.”

Since becoming executive director of the Save Lucy Committee in 2000, Helfant has increased the number of visitors to 133,000 people last year and increased revenue for the operating budget to $500,000, which is used to maintain the structure, pay employees and various insurances, and promote her as a tourist attraction.

Lucy will celebrate her 138th birthday Saturday, July 20 with a “Back to the Beginning” carnival theme that will commemorate the 50th anniversary of the Save Lucy Committee, Helfant said.

He also said he has no knowledge of any development plans for Lou DiVentura’s Greenhouse property across Decatur Avenue.

“I don’t think you’re going to see a Lucy Hilton,” Helfant said before thanking the city for replacing the deck located in Josephine Harron Park, so named for the woman who formed the Save Lucy Committee and arranged to have the decrepit roadside attraction moved two blocks to the city-owned lot on Decatur Avenue in 1970. It took 30 years and $1.5 million to completely restore the structure, which was built in 1881 to lure real estate investors to Margate, then known as South Atlantic City.

In 1976, Harron was successful in getting Lucy designated as a National Historic Structure, which is overseen by Historic Preservation Office, NJ Historic Trust, NJ Historical Commission, National Park Service and New Jersey’s Green Acres program. The New Jersey attorney general will be required to approve the lease, Helfant said.

Over the years, the iconic Lucy has become as much a part of Margate as the waves the lap the shoreline she faces.

Unless something catastrophic happens to Lucy, such a major storm or fire, and insurance doesn’t cover full replacement cost, taxpayers will not be asked to fund maintenance of the structure, he said.

HOA President Jay Weintraub, reminded the attendees that association’s mission is to “be a voice” for all residents of Margate regardless of their home ownership status.

“Little by little our voices are being heard. Some people think of us as rabble-rousers…but we want to make a difference in the community,” he said. “When issues come up, this association will speak up.”

He credited the members for pressuring the governing body to squash a plan to approve a condo-hotel overlay zone along a six-block area along the beach, which would have permitted a high-rise building that partially caters to short-term visitors, to be erected on the Ventura’s Greenhouse site. Under pressure from residents, last September, commissioners killed a revision to the city’s developmental ordinance that would have allowed it.

“Some of the things we do make an impact,” Weintraub said. “There are many who would like to shut us down and tell us to be quiet and put a muffler over our mouths, it’s not going to happen. Anything worth having is worth fighting for.”

Squashing the overlay ordinance, which would have allowed a condo/hotel to be built without the need for “hard to get” variances, does not prevent a property owner from submitting an application to be heard by the Planning Board, however. 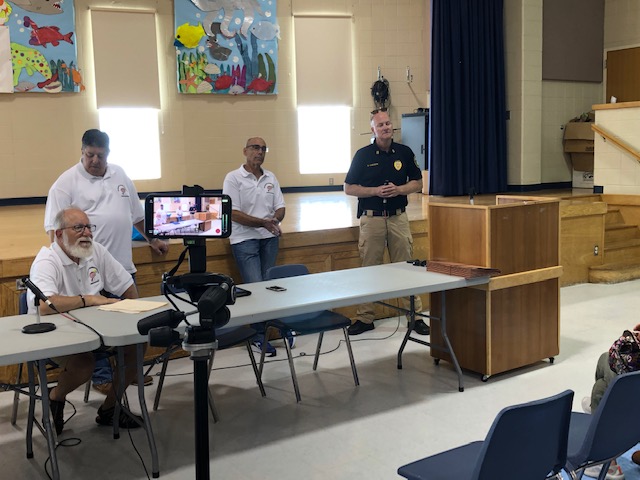 The membership, which has grown to 365 paid members since the group formed a year-ago, also heard from Acting Police Chief Matthew Hankinson who fielded questions about various traffic safety and parking issues.

Second Vice-president Marc Alch credited the Police Department for maintaining control over large crowds gathered on the beach in front of Lucy on Memorial Day.

“They kept everything in check and even had people down there picking up trash,” Alch said.

Weintraub also suggested the HOA join with other New Jersey homeowner associations to create “an association of associations” to hire an attorney to lobby state government to change the constitution to permit second homeowners to have more of a say in public policy and local elections.

“It could take years, but unless you take the first step, you’ll never get the journey to happen,” Weintraub said.

Over the past two months, the HOA has conducted a CPR class and a beach cleanup, and it will hold a bicycle and street safety program at the Eugene A. Tighe Middle School parking lot, 10 a.m. Saturday, July 6.

Margate’s beloved Lucy is staying put for the foreseeable future