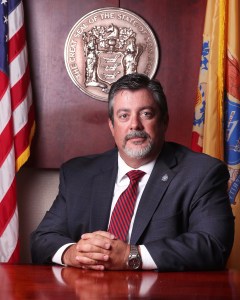 MAYS LANDING – ACPO staff said farewell on Wednesday, July 31 to Chief of County Detectives Daren J. Dooley, who retired after a 25-year career in law enforcement, 16 of those years as chief of detectives in the Atlantic County Prosecutor’s Office. He is the longest tenured chief of county investigators in the state.

Atlantic County Prosecutor Damon G. Tyner said Dooley set a “standard of excellence” all members of the agency should emulate.

“I want to personally thank him for his friendship and guidance over the past 2 ½ years of my term as prosecutor. The Atlantic County Prosecutor’s Office would like to wish him a long, happy, and healthy retirement. It is well earned,” Tyner said.

Dooley most recently commanded the Detective Division of the Atlantic County Prosecutor’s Office, which consists of investigations, litigation and administration.

Dooley began his career in law enforcement in 1994, hired as an investigator in the Atlantic County Prosecutor’s Office, and worked in numerous units including litigation, financial crimes, major crimes, crimes against children, narcotics, administration, and as team leader of the emergency response team. He has held a variety of supervisory positions including sergeant, lieutenant and captain of county investigators, deputy chief and chief.

Dooley is a lifelong resident of Atlantic County. He is a graduate of Holy Spirit High School and holds a B.S. from Salisbury University, and a Master of Science degree in criminal justice administration from St. Joseph’s University. He is a graduate of the Atlantic County Police Academy and the New Jersey Division of Criminal Justice Modified Basic Course for Investigators.