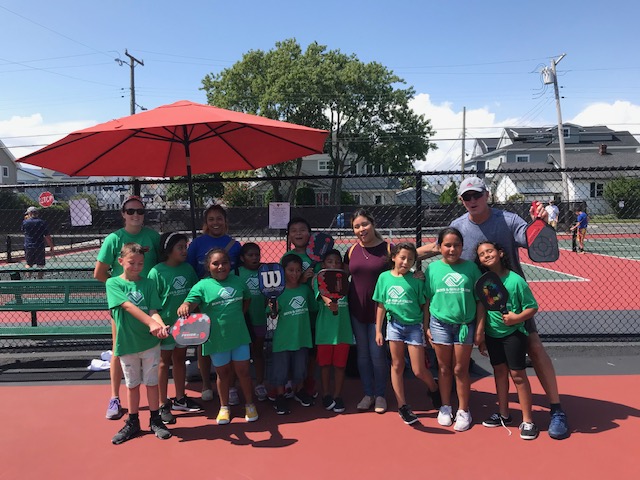 Margate Rec held a pickle ball clinic Friday, Aug. 16 for children of the Boys and Girls Club of Atlantic City.

The Margate City Recreation Department will host a public pickleball tournament and exhibition 4 p.m. Sunday, Aug. 18 at the pickleball courts behind the Margate Municipal Building, Union and Monmouth avenues. The event benefits the Boys and Girls Club of Atlantic City and features some of the most accomplished pickleball players from Philadelphia to Cape May.

Local players from the shore area are challenging those from the Cherry Hill area. The public is invited to enjoy the friendly East v. West competition.

There is no cost to attend. Contributions to the Boys and Girls Club of Atlantic City will be accepted.

“This event highlights the rapid growth of Pickleball and features some of the most tournament-tested players in our area,” tournament director Dan Gottlieb said. “In conjunction with the event, several of the participants will be helping to introduce the game of pickleball to the youngsters, who are so well served by the extraordinary work of the Boys and Girls Club of Atlantic City.”

Tournament participants held a 90-minute introductory clinic Friday afternoon for a group of children from the Boys and Girls Club.

“The goal is to introduce a healthy and fun activity for the children to enjoy at their newly renovated facility in Atlantic City,” Gottlieb said.

Tournament organizers and participants have applied for a grant from the Florida-based non-profit, Pickleball for All, to procure equipment for the gym at the Boys and Girls Club.