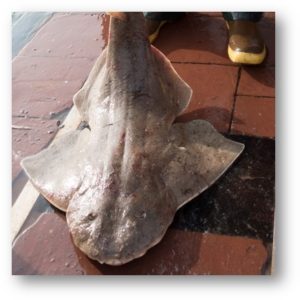 Both New Jersey and the federal government regulate shark fishing. Certain species have been designated as “prohibited species” by the National Oceanic and Atmospheric Administration or NOAA. The DEP recognizes that surf fishermen encounter sharks frequently, particularly during summer, but anglers who inadvertently hook a shark should make every attempt to release it unharmed.

“Many shark species do not reach maturity for many years and have few pups at a time, so their populations are particularly vulnerable to increased mortality from fishing and other human activities,” McCabe said. “If a shark dies before it has had a chance to reproduce, it compromises the species’ ability to maintain healthy population levels.” 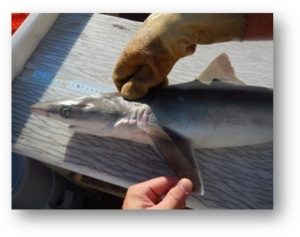 Species listed as prohibited have all been identified by NOAA as being particularly vulnerable due to a combination of factors include:

“If a prohibited shark species is caught, it must be released immediately without removing it from the water and in a manner that maximizes its chances of survival,” Division of Fish and Wildlife Director Dave Golden said. “That means keeping it in the water when removing a hook, not taking photos of a shark out of the water and certainly not taking it home.”

Anglers fishing from shore should never drag onto dry sand a shark they plan to release. Dry sand can be extremely abrasive on a shark’s skin and can cause damage if it enters a shark’s gills. To safely release the shark, maneuver it into shallow water where it can be safely handled while keeping the gills wet (approximately 2-4 inches of water, depending on the size of the shark, with its head facing the open water to maintain a regular flow of water over its gills.

If surf conditions make handling the shark while it is still in the water difficult or unsafe, anglers are encouraged to cut the line as close to the hook as safely feasible.

“Sharks of all species play an incredibly important role in our marine ecosystem,” McCabe said. “It is important we all adhere to the regulations and management strategies in place to help ensure their future as part of New Jersey’s natural heritage.”

Information to assist anglers with the safe and responsible handling and release of sharks is available at www.fisheries.noaa.gov/resource/educational-materials/careful-catch-and-release-brochure.

For more information about sharks found in New Jersey waters, contact the Division of Fish and Wildlife’s Bureau of Marine Fisheries at (609) 748-2020, or the National Oceanic and Atmospheric Administration’s Highly Migratory Species Division at 301-427-8503.

To learn more about the Division of Fish and Wildlife’s Bureau of Marine Fisheries, visit www.nj.gov/dep/fgw/marfhome.htm.