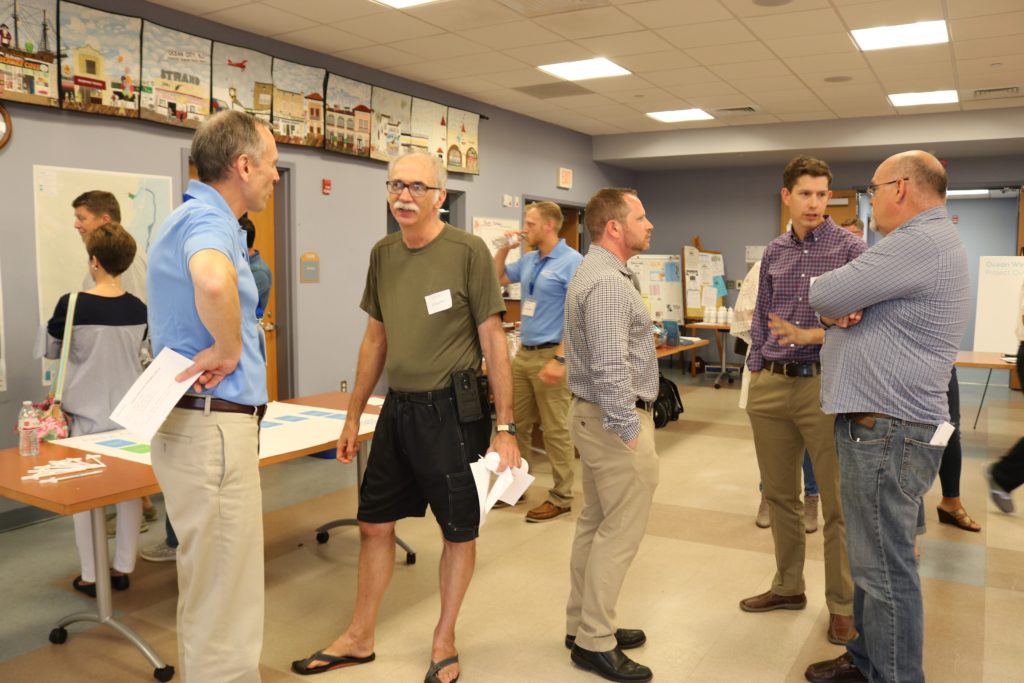 Company officials for the wind farm project discuss their plans with members of the public at the meeting.

OCEAN CITY – An ocean wind farm that would power more than a half a million New Jersey homes, create thousands of jobs and bolster the state’s use of renewable energy was discussed at a meeting in Ocean City on Tuesday evening.

It was the second in a series of meetings educating the public about the wind farm project. A meeting was held in Atlantic City on Monday.

About 100 people listened to representatives of Orsted, the company doing the project, outline the environmental and economic aspects of wind energy.

The state recently selected the company for incentives to build an 1,100-megawatt wind farm 15 miles off the coast of Atlantic City.

Officials told attendees at the Ocean City Community Center that the project will create 3,000 jobs over the three years of construction and 70 full-time permanent positions. Construction is expected to commence in the early 2020s, with the wind farm operational in 2024. 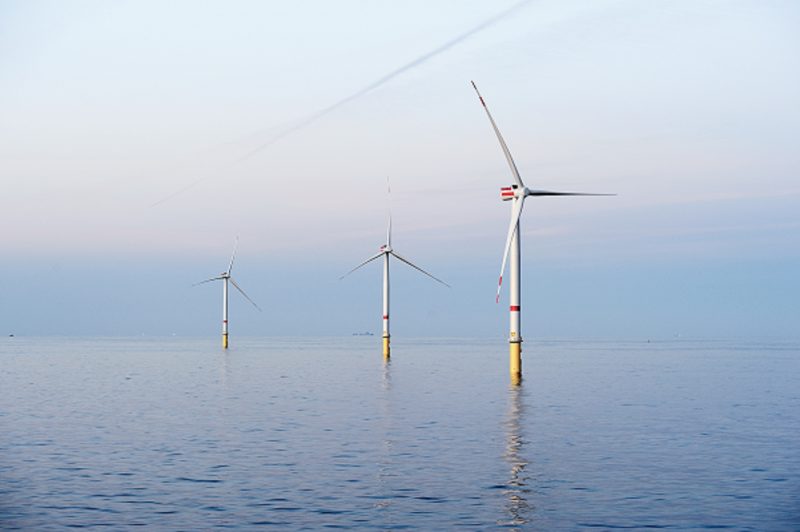 Orsted plans to build a wind farm 15 miles off the coast of Atlantic City.

Ohleth addressed concerns from those in the fishing industry. She said the company is willing to work with them so that they all can coexist happily.

But Rick Weber, owner of South Jersey Marina in Cape May, had some concerns about how the project would impact the recreational fishing areas.

“The worst-case scenario would be if we lose boating access, if say, something goes wrong,” Weber said. “What if the Coast Guard needs a safety perimeter?”

The potential upside for the fishing industry could be the structures installed by Orsted for the wind energy. The result could be a man-made reef where mussels could grow and create even better fishing areas, Orsted officials said.

That happens, however, in deep waters. Weber said he did not believe the water would be that deep where the proposed wind farm would be located. 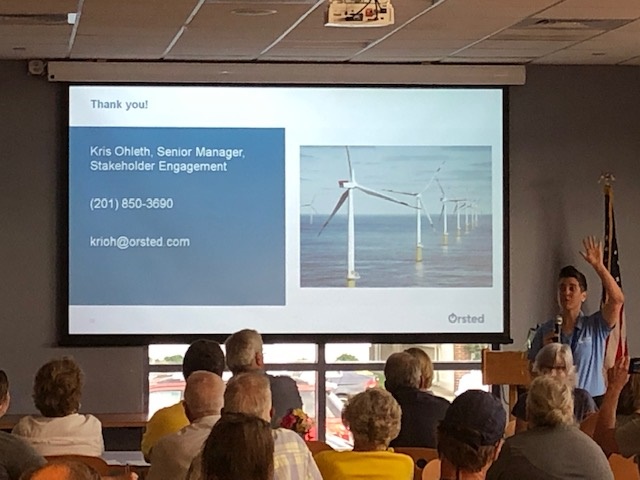 Kris Ohleth explains how Orsted is successful with wind farms.

Brian Logue of Ocean City spoke with Weber. Logue, a member of the Ocean City Marlin and Tuna Club, also had questions about the impact on fishing.

“I am concerned as far as what impacts it could have good or bad. It is too early to know anything yet,” Logue said.

While the project is proposed 15 miles off the coast of Atlantic City, a cable would need to be run — possibly through the inlet in Ocean City — to the former B.L. England power plant.

Logue, who also sells real estate for Berkshire Hathaway HomeServices in Ocean City, said he is also concerned what the project could mean for home values. 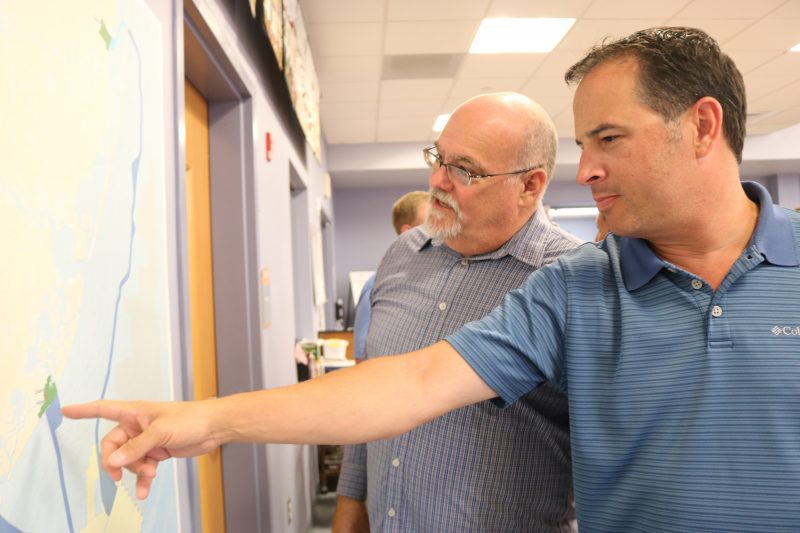 Donna Moore, an environmentalist and Ocean City resident, said she supports sustainable energy. However, like some others in the audience, she had some questions about the wind farm.

“I have some environmental questions I hope to have answered,” Moore said before the meeting. “I am concerned with marine mammal migration. Also, I wonder how it will impact the year-round population and how the installation and operation of the project will affect migratory bird routes.”

Representatives from the federal Bureau of Ocean Energy Management were on hand to watch and listen, they said.

When the project is in the next phase, they said, there will be an open forum in a venue similar to the one Tuesday night.

However, that is about a year away, they noted. 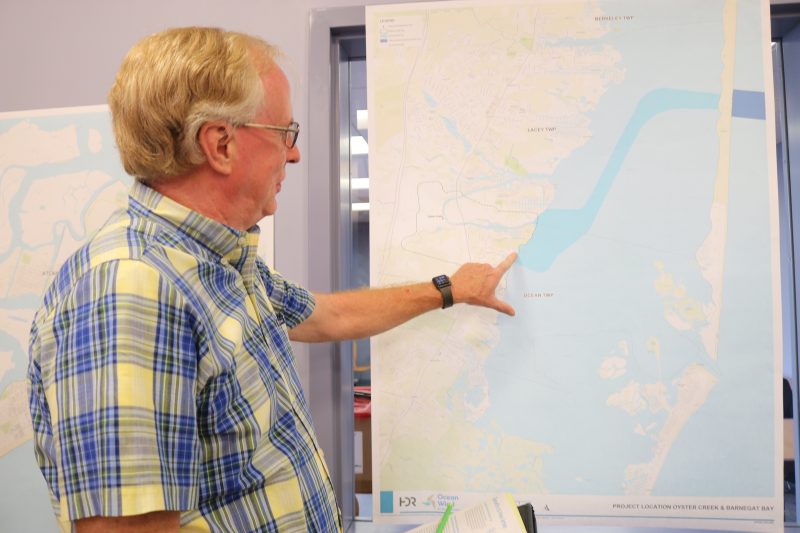 Retired Cape May County engineer Dale Foster is supportive of the project.

Retired Cape May County engineer Dale Foster, who attended the meeting as a member of the public, listened to what Orsted officials had to say.

“This is an exciting project,” Foster said after the presentation. “Obviously, we have to get away from the carbon footprint here and I think it is great New Jersey is coming to the forefront to start this.”

Drew Lewis of Ocean City also believes the project is a good idea.

“I think it is really important that the state is looking into this and the DEP (New Jersey Department of Environmental Protection) is taking the initiative on alternative energy,” Lewis said.

It operates the Block Island Wind Farm in Rhode Island, America’s first offshore wind farm, and has been awarded over 2,900 megawatts of capacity through six projects.

The company is jointly headquartered in Boston and Providence, Rhode Island, and employs more than 100 people.