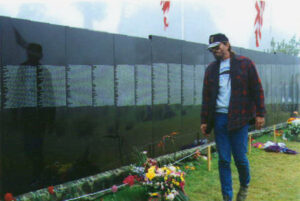 BUENA BOROUGH – The Moving Wall, a half-sized replica of the Vietnam Veterans Memorial in the nation’s capital, will be on display Oct. 3-7 on the corner of Central Avenue and Southwest Boulevard in the Minotola section of the borough.

The U.S. Department of Defense is coordinating, supporting and facilitating programs that commemorate the 50th anniversary of the Vietnam War at all levels of government, according to a release. Area residents will have the opportunity to view the monument, which has traveled around the country for more than 30 years.

The wall stands 6 feet tall at its center and spans 300 feet from end to end. JohnDevitt, Norris Shears, Gerry Haver and other Vietnam veteran volunteers built The Moving Wall, which was displayed for the first time in Tyler, Texas in October 1984. Two structures of The Moving Wall now travel the USA from April through November, spending about a week at each site, according to The Moving Wall website.

“This traveling memorial stands as a solemn reminder of the great sacrifices made during the Vietnam War,” Buena Mayor David Zappariello said. “The purpose of the wall is to allow people to pay their respects, rekindle friendships and have a chance to witness this national monument right here at home.”

“Our opening ceremony will be a momentous event that will be attended by many area veterans, public officials and community residents,” Zappariello said. “It is a once in a lifetime experience…a moment of immense pride and an opportunity to show our support as a community to those veterans who have sacrificed so much.”

For more information or to volunteer, call Katrina D’Alessandro at 936-3389. See The Moving Wall Visits the Borough of Buena on Facebook.