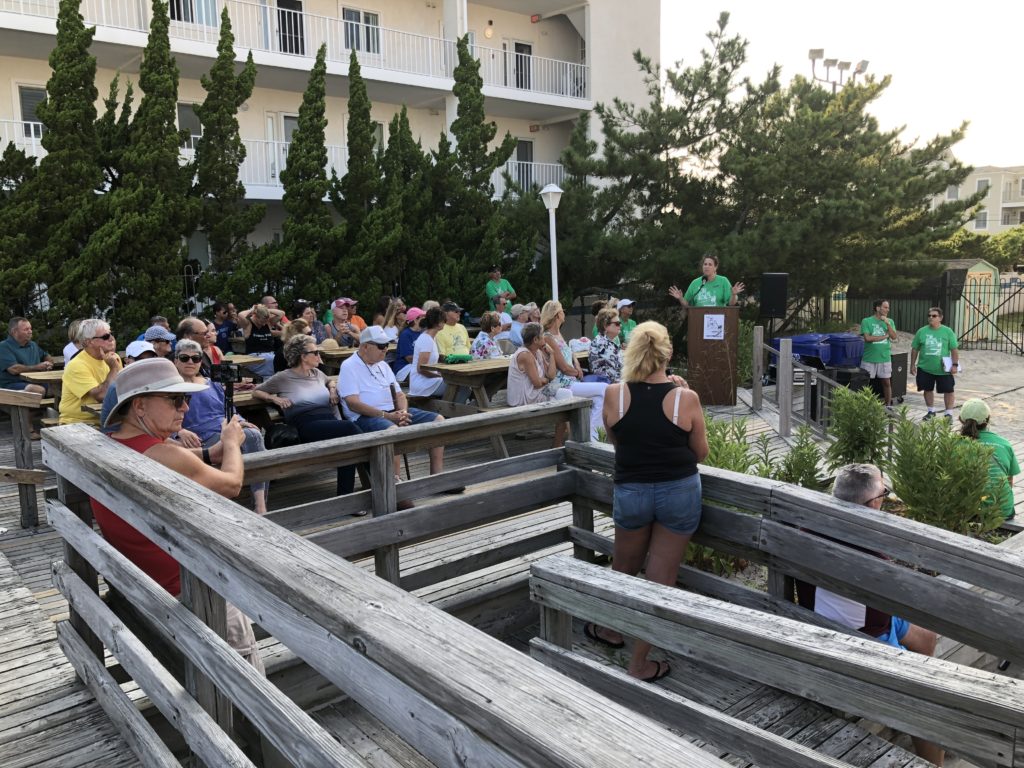 Advocates of a Margate boardwalk attended a rally at Lucy the Elephant in August 2018.

MARGATE – Considerable research and cost analyses must be done before the city can decide the feasibility of building a boardwalk in Margate.

“It’s premature to say yes or no, can it be built,” Administrator Richard Deaney said. “A lot would have to be done before you can ask that question and answer that question responsibly.”

The city issued a written response Friday, Oct. 18 to the Margate Boardwalk Committee’s proposal to build one of three boardwalk designs along the landward side of the sand dune. The boardwalk committee, led by longtime Margate resident Glenn Klotz, presented its study, “A Margate Boardwalk for the 21st Century,” to the Board of Commissioners in August amid an overflow crowd of supporters and detractors. Along with the study, Klotz presented the commissioners with 613 signatures on a petition asking the them to poll all taxpayers to determine if the proposal should move to the next step.

In response to the boardwalk committee study, city officials asked department heads to review the report and consider how building a boardwalk would affect their departments.

At the Thursday, Oct. 17 Board of Commissioners meeting, Deaney read some of the introduction to the “Margate Professional Staff Response to Boardwalk Proposal” into the record, stating that “the feasibility of building a boardwalk should be decided on its own merits.”

Although information contained in the boardwalk committee’s proposal was not verified by Margate’s professional staffers, which includes attorneys, planners, engineers, police, fire and public works officials, and the financial officer, their independent responses raised questions that would need to be answered before a boardwalk could seriously be considered as a public project.

The report, which has been posted on the city’s website, is divided into seven sections: legal, planning and engineering, maintenance, policing, fire and beach patrol, insurance and financial considerations.

According to the financial report, the commissioners would issue bonds to cover the cost of the $24 million “Uniquely Margate” version proposed by the boardwalk committee, which requires a 5% cash down payment totaling $1.2 million. The report states that the average taxpayer would incur a cost of $173 in the first year, and between $252 and $287 a year for 15 years, not counting repairs, maintenance, security, insurance, utilities. Additional capital costs would be incurred for re-decking every five- to 12-years.

To ensure adequate fire protection, fire hydrants would be needed at a possible cost of $2.5 million and the boardwalk designed to carry the weight of fire apparatus and emergency vehicles, or the city would have to acquire lighter vehicles. A less expensive solution at a cost of $500,000 would be to extend dry sandpipes to boardwalk ramps every other block. Sand build-up under the boardwalk could also make accessibility a problem for the Beach Patrol, the report stated.

Margate currently has four vehicle access points to the beach, but more may be needed, and the proposed width of the boardwalk is “not conducive” to public safety vehicles, the report states.

Ideally, boardwalks should be patrolled on bicycle, and four additional Class II officers would be needed along with regular officers who patrol the beach on ATVs. Because 95% of beach-block homes are unoccupied during the off-season, formal surveillance would be needed, although the area is already patrolled in those areas, so the level of security would remain the same. Bicycle thefts, which are higher in summer and committed by “transient” suspects from other municipalities, would probably increase.

“A boardwalk would grant easier access to perpetrators of petty theft to the area,” and during winter, greater surveillance would be needed on the beach-block, the report states.

The Police Department estimated it would need an additional $100,000 a year to patrol the area.

The boardwalk, which would be an attraction to additional users, could exacerbate parking issues.

According to the Public Works Department, building a boardwalk over the recently installed stormwater drainage system “would make it very difficult to properly maintain and repair this system,” the report states. The city purchased equipment to clean the “dead zone” between the dune and bulkhead but maintaining the area would not be possible with perpendicular ramps leading from street ends to the boardwalk.

The departmental budget would likely increase $250,000 annually for equipment, tools, supplies and utilities, including $150,000 for three new employees, the report stated.

Planners said the committee did not consider the impact of future beach replenishments, the proposed black locust wood is prone to warping and is expensive, and it is unclear if the $24 million price tag included soft costs, engineering, environmental studies, permits and construction management. Also not considered is an area between Fredericksburg and Barclay avenues that may have to be set aside for endangered shore birds, should they decide to make Margate their home. Also, water and sewer lines would be needed for rest rooms, and construction could conflict with unseen rock jetties in several locations along the beach.

Legal issues could delay any construction should a dozen private property owners who have ownership rights to the beach object in court. The city could incur significant legal costs if it has to research ownership rights, the report stated.

Obtaining approval from the NJ Department of Environmental Protection and the U.S. Army Corps of Engineers, who have jurisdiction over construction of a boardwalk, could be challenging, especially because of the drainage system installed on the beach. Although there was once a boardwalk in Margate that washed way over the last century during storms, a new survey would be needed to plot the location of the proposed boardwalk.

The report suggests a sit-down with DEP Commissioner Katherine McCabe, who supports public access to waterways, may be in order.

Officials did not speak to the committee’s poll request.

“The purpose of this report is to shed light on some of the myriad of questions that remain unanswered as well as to point out many of the practical challenges and costs of normal operations associated with constructing a boardwalk,” Deaney said.

Commissioners thanked city officials for their work preparing the document.

“I appreciate the hard work and effort that went into that. I look forward to more discussion on it,” Commissioner Maury Blumberg said.

“It gives us good insight into the decision-making process,” Commissioner John Amodeo said.

Resident John Sewell, who maintains a presence at commission meetings, said senior citizens should not be “saddled with this additional cost” of building a boardwalk.

“It could drive out senior citizens and young families who cannot afford the extra taxes,” he said.