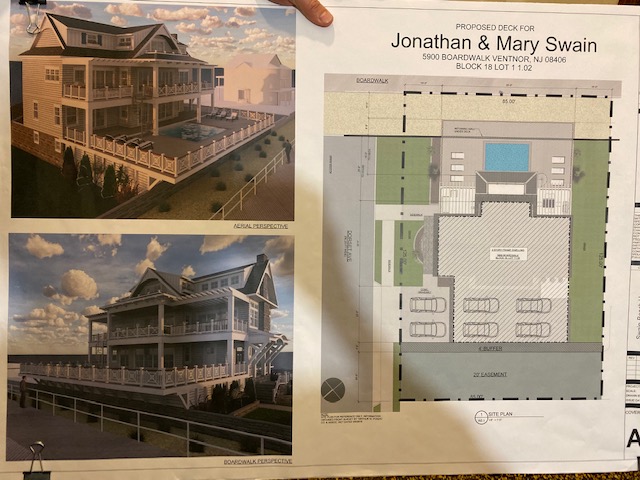 Deck design plan for a home under construction on the 5900-block of the Ventnor boardwalk.

VENTNOR – Dozens of residents who turned out to object to two applications being heard before the Planning Board Monday, Oct. 28, were surprised when both applications were withdrawn by the applicants, one of them rather abruptly.

The board was scheduled to hear an application for a Certificate of Non-conformity from the current owners of 211 N. Suffolk Ave., so they could sell the property as a triplex. The property was built as a triplex in 1910 and has operated as such since then, the owners stated.

The state requires a certificate of non-conformity for any multi-family units located in single-family residential zones, but the city enforces the state requirement only upon transfer of the property to a new owner.

Although neighbors indicated the building has always been a triplex, the applicants, Christine and Steven Nelson of Cape May, were unable to provide the board with written documentation proving the property has been used as a multi-family residence since before 1947.

According to testimony provided by neighbors, including Shaun Smith who lives with his wife in one of the units, the owners have an agreement to sell the property to the Hansen Foundation, which operates several sober living homes in the Atlantic City-Ventnor area. The foundation offered Smith $2,000 to move out within 30 days.

Smith was reading from a letter he sent to the board regarding what he said was the Hansen Foundation’s plan to turn the property into a sober living facility for 18-36 people recovering from addiction to drugs or alcohol. Smith cited the city’s most recent Master Plan Re-examination Report, which recommended reducing density, especially for properties that do not conform with current zoning requirements and replacing them with homes that also comply with new flood elevations. The area is zoned for single-family homes.

His testimony was cut-off by Planning Board Chairman Jay Cooke who stated the purpose of the hearing was only to determine if the property qualified for the Certificate of Non-conformity and not any future use of the property, and that Smith’s comments were irrelevant to the hearing.

“Do you have proof or any evidence thereof that that property existed as a triplex prior to 1847? If not, we will ask you to let others speak,” Cooke said. “I have to limit comments to the issue at hand.”

The building is three-stories high with three apartments containing two-, three- and four-bedroom units and has separate meters for utilities. Each floor is 1,250 square feet. The property is currently assessed for $277,100, with a $202,700 land value.

“I feel bad for these people, but do they all have to come to Ventnor Heights?” resident and builder Gary Tavella asked the board about the proliferation of “group homes” in the area. “When will be the time to stop playing with this?”

“The City of Ventnor cannot stop a group home in a residential zone. It is protected by state law,” he said. “I don’t like it as much as you do, but there’s nothing we can do to stop it.”

Landgraf said the low cost of large properties in Ventnor makes them attractive for non-profits to purchase.

“That’s what we are trying to do since day one. We can make the homes more valuable and they become too expensive to buy by a non-profit,” he said. “If I could with the swipe of a pen not permit these in every zone in the city, I would because they are problematic.”

Landgraf noted the NJ Department of Community Affairs has filed suit against the Hansen Foundation for not complying with state regulations regarding Oxford Houses, which are self-governed homes for those in recovery. The state contends that the Hansen Foundation is operating its Serenity Houses as rooming houses, where tenants pay a fee to live in transitional housing.

“We as a municipality voiced our concern with the state,” Landgraf said. “They are fighting that battle for all communities in the state.”

Hansen Foundation operates a Serenity House in the North Beach area, however, there are other Oxford Houses on Weymouth, Lafayette, Frankfort and Cornwall avenues, some of them large beach-block single-family homes, and several in the Lower Chelsea area of Atlantic City.

One woman expressed concern that the presence of a group home would negatively affect property values in the neighborhood, causing taxes to increase.

“Would you like them next to you?” she said. “I’m concerned there are kids in this neighborhood.”

The only way to stop a group home from opening in a residential neighborhood is for residents to form a trust to purchase the property for their own use, Cooke suggested.

“I need the money to pay for my mother’s nursing home because she has Alzheimer’s,” owner Christine Nelson said. “If you guys want to band together to buy it, that’s great.”

The couple withdrew their application to give them time to do more research and produce documents that would confirm it was a triplex before 1947.

“We just want to sell the property to help our mother out,” Steven Nelson said. “The property has been for sale a long time and we weren’t getting any bids.”

The Hansen Foundation made an agreeable offer, so they accepted it, he said.

“We are not trying to cause a ruckus. That is not our intent,” he said.

The second application requesting C variance relief for a front yard setback at a beachfront home being built by the Swain Family Trust on Dorset Avenue, was abruptly withdrawn by Swain attorney Kristopher Facenda as resident Todd Miller, chairman of the St. Leonard’s Tract Preservation Committee, was speaking.

The Swain family sought a variance to extend a deck on the boardwalk side of their 5,000-square-foot, five-bedroom home being built on a beachfront lot on Dorset Avenue. The deck would include an 18- by 18-foot pool and extend several feet beyond an existing seawall, 4 feet above the boardwalk. All other aspects of the construction project comply with existing zoning regulations and no other variances are needed.

The applicant proposes a 10-foot front yard setback where 15 feet is required.

Resident Jeffrey Joseph said that with the  fencing required to surround a pool, neighbors’ views would be greatly diminished and would negatively affect their property values.

Resident and builder John Irons said that because the 85- by 125-foot lot is larger than most lots in Ventnor area, the architect should have been able to design a house without the need for any variances.

With 42-inch pool railings, the deck would be 12 feet in the air, he said.

“It’s going to be an eyesore, a monster. The reason to grant variances in Ventnor is for hardships. I see no hardships here,” he said.

Approving the variance would set a precedent for the remaining two lots on along the boardwalk, he said, and greatly reduce air, light and open space.

Brian Steiner said that the boardwalk increases property values for all homes in the area.

“Every inch of view that I give up is a detriment to me personally and the community. Every inch they get closer to the boardwalk makes the boardwalk less appealing,” he said. “They are asking the community to give up their rights to air, light and view just to have a pool.”

“This variance does nothing to advance the vibrancy of the community of St. Leonard’s Tract,” he said. “It’s an over-reach. I’ve never heard hardship and pool in the same sentence.”

He said the pool and deck could be easily redesigned without the need for a variance.

As Miller was saying that building a deck with fencing beyond the seawall would be “monolithic,” Facenda abruptly interrupted him to state the Swain Trust was withdrawing its application. No reason was given for the sudden change of position.

“After consulting with my client, we would like to withdraw the application without prejudice and possibly come back at a future date,” he said. 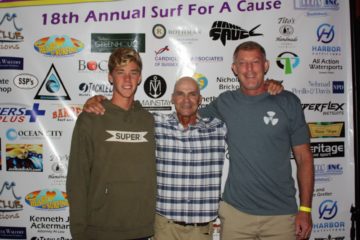