HERO Campaign and Uber to provide discount rides during the holidays 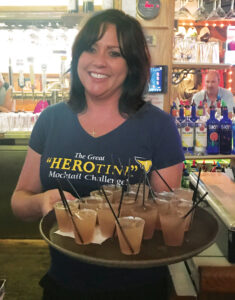 ATLANTIC CITY – The John R. Elliott HERO Campaign for Designated Drivers and Uber are teaming up to put a stop to drunk driving at the Jersey Shore this holiday season.

The region’s first “Holiday HEROES Safe Ride” program will seek to eliminate DUI incidents by offering free and discounted rides home from more than 30 participating bars and taverns in Atlantic and Cape May counties between Thanksgiving and New Year’s Day. Patrons of the HERO establishments will receive Uber ride credits up to $20 and the ability to leave their cars overnight in each establishment’s parking lot.

The HERO ride program is expected to provide up to 2,000 rides during the five-week holiday period. The free and discounted codes will be available to patrons in need of a safe and reliable ride home and distributed at the discretion of participating establishments. Participating bars and taverns are listed below and at HEROCampaign.org.

The HERO Campaign’s goal is to make the use of safe and sober designated drivers as automatic as wearing a seatbelt. The campaign is dedicated to the memory of Navy Ensign John Elliott of Egg Harbor Township, a graduate of the United States Naval Academy who was killed by a drunk driver in July 2000 as he was traveling home from Maryland for his mother’s birthday.

“The holidays are a time to celebrate with friends and family,” HERO Campaign Chairman Bill Elliott and Ensign John Elliott’s father, said. “We want those good times to stay safe by making sure everyone has a designated driver.”

Sponsors of the holiday program include Uber Technologies, the Casino Reinvestment Development Authority and Coors Light, as well as AtlantiCare, OceanFirst Bank and the Ironworkers Local 399.

“He would have enjoyed the HEROtini® celebration,” noted Muriel, saying her son was named the Outstanding HERO of his graduating class at the Naval Academy for his service to his fellow midshipmen, his positive spirit and sense of humor.