Stating Van Drew’s alleged decision to join the Republican Party after a meeting with President Donald J. Trump does not “align with” their values, Javier Gamboa, Edward Kaczmarski, Justin M. O’Leary, Mackenzie Lucas and Caroline Wood informed Van Drew’s Chief of Staff Allison Murphy that they could no longer “in good conscience” work for Van Drew.

Van Drew is reported to be considering switching parties after he publicly stated that he would not vote to approve articles of impeachment brought by the Democrat-led House of Representatives. The House has scheduled a full vote on impeachment Wednesday, Dec. 18. Van Drew is one of two Democrat representatives who said they will not vote to impeach the president.

Once approved, the Republican controlled U. S. Senate will conduct a hearing to remove the president from office. Senate leaders have said they do not have the votes to remove Trump from office.

In their resignation letter, staffers said Trump Republicans have neglected the needs of working people.

“Worse, they continue to aid and abet Trump as he shreds the Constitution and tear the country apart,” and “jeopardized national security for his own personal political advantage,” they said.

Staffers said they agreed to work for Van Drew based on their own Democratic values and were “saddened and disappointed” by his decision, which he has yet to confirm. 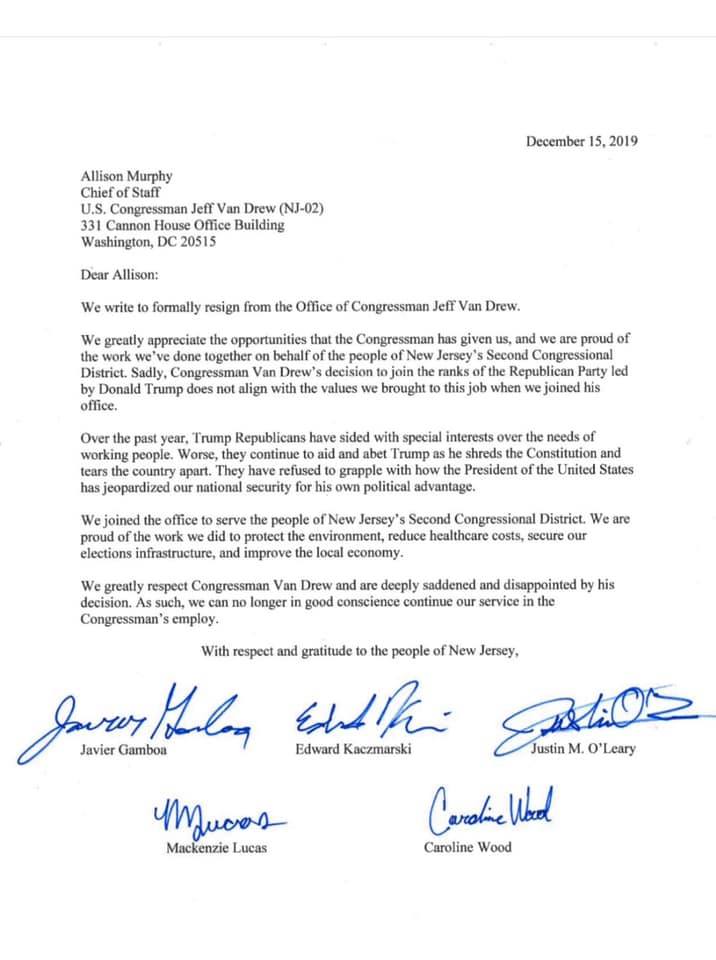