Sandy-affected homeowners victimized by contractors may get additional relief 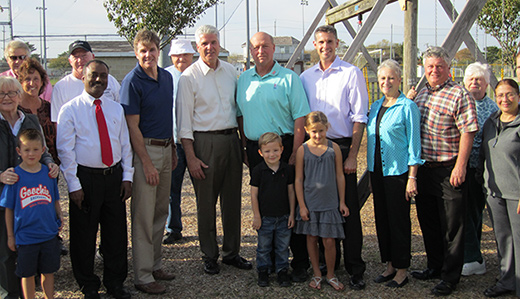 NJ Senate/Families who are still waiting to get into their homes after Superstorm Sandy can expect additional help after a bipartisan bill sponsored by Sen. Chris Brown has become law.

VENTNOR – Families still waiting to get into their homes after Superstorm Sandy can expect additional help after a bipartisan bill sponsored by NJ Sen. Chris Brown has become law.

“Families who lost their homes to Sandy should not be victimized twice by contractor fraud, which is taking a further toll on them by wasting limited public dollars and draining their personal savings,” Brown said in a statement. “Too many of our families had the grants to rebuild their homes essentially stolen by unscrupulous contractors, and yet the bureaucracy was making it difficult for them to find relief. Now, it will be possible for our local families to move back home and on with their lives.”

Angel Eguaras of Ventnor, chose a state approved contractor to rebuild his home, but the contractor failed to complete the work according to the architect and engineer’s specifications, Brown noted.

“The masonry work by the contractor violated the building code. The defects are so numerous that I was told the masonry should be demolished and reconstructed,” Eguaras said.

Brown said Eguaras has found it difficult to obtain reimbursement from the state’s Sandy relief program for the costs to repair the damage caused by the contractor.

Previously, the Department of Community Affairs required Sandy victims to provide a document produced by the Division of Consumer Affairs indicating the contractor has been charged with a crime involving fraud or theft by deception.

According to the NJ Organizing Project, an advocacy group for Sandy-victims, the document, commonly known as a “charging document,” has proved burdensome to obtain for many who have been defrauded by their contractors.

Brown’s new law will provide an alternate method for victims of fraud to apply for relief so they can be made whole.

If the Division of Consumer Affairs in the Department of Law and Public Safety, the Office of the  Attorney General, a county prosecutor’s office, state, county, or municipal law enforcement agency, a federal law enforcement agency, or any other government law enforcement authority has reasonable cause to believe a contractor violated the consumer fraud act, DCA would be authorized to distribute fraud-response funding regardless of whether an applicant presents a charging document.

“It’s well passed the time to bring closure for the hundreds of families who just want to move back into their homes and on with their lives,” Brown said in his newsletter.

The DCA and the NJ Division of Consumer Affairs have two months to develop the necessary regulations for the program, Brown said.