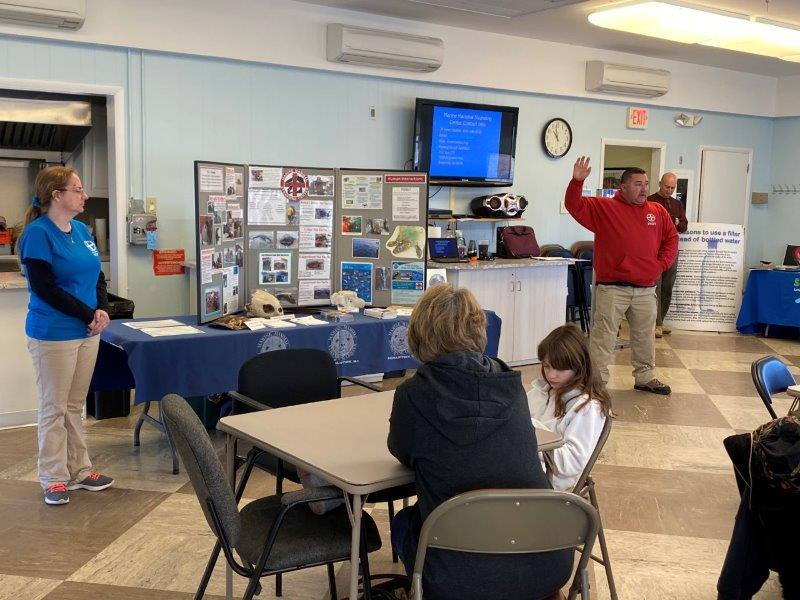 “If you find anything on the beach, call us. We can instruct you on what to do,” he told about 25 local residents, along with several Margate police officers and firefighters who gathered at the Bloom Pavilion for the educational program, which was sponsored by Sustainable Downbeach and Margate Recreation.

Sustainable Margate Chairman Steve Jasiecki said the program was held to educate the public about what to do if they come across a marine animal on the beach, during the upcoming seal season, which is March through May. On rare occasions, a seal might come ashore during the summer season, when beachgoers are aplenty.

“It was great to have the Marine Mammal Stranding Center come to educate the public because we do have seals that come on shore,” he said. “We thought this talk would be beneficial for the community and for our precious marine life.” 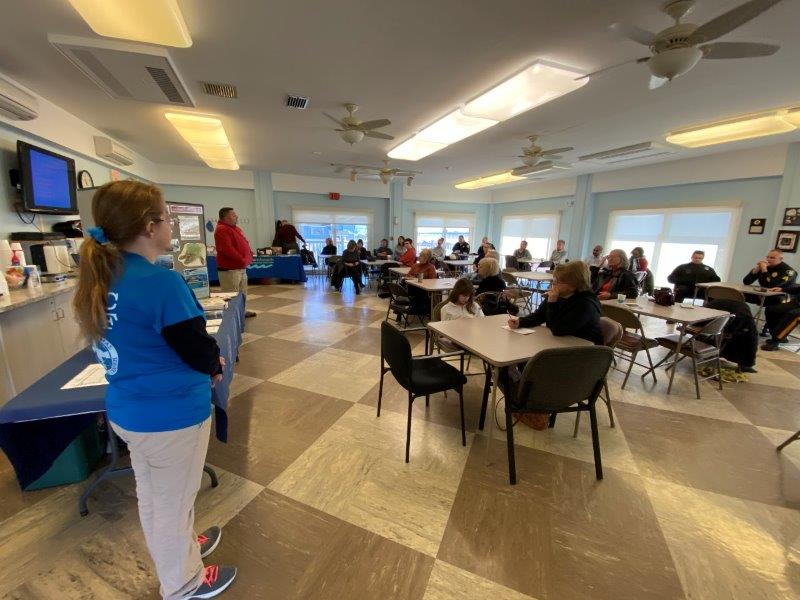 The MMSC is the sole stranding site for marine life in the State of New Jersey, Platt said.

He started working as a volunteer when he was younger and became a staffer after he retired as a firefighter and paramedic.

“I grew up doing this as a kid and now I’m back to it.  We are the only authorized rescue and rehabilitation organization in the state.”

The MMSC has been responding to reports of stranded animals since 1978, and has rescued more than 5,400 animals, some as far as the Pocono Mountains where a seal traveled upstream and had to be returned to the sea, he said.

“We get triple that number in calls,” he said.

The center in Brigantine has three paid field technicians and veterinarians on call who respond to strandings, transport mammals to the rehab center and nurse them back to health before releasing them to the ocean. Efforts are made to avoid as much human contact as possible, especially with seal pups, so they can easily reacclimate themselves when they are returned to the wild.

However, it’s hundreds of volunteers across the state who are first on the scene to assess the situation, he said.

“They can assess the situation and help us decide if we should respond,” he said. “The volunteers are the backbone of the work we do.”

In most cases, the animal is just resting or taking a nap, especially when rough seas tire them out. 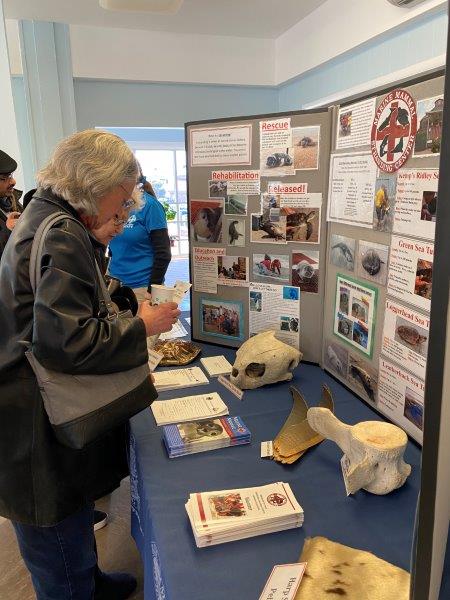 The center has four pens that can be filled with fresh or saltwater, depending on the needs of the animal. Four additional pens are used to quarantine animals who are sick. There’s also an exercise pool where the animals can get in shape before they are released.

The center has several vehicles used to transport the large animals, including a utility truck, refrigerated box truck to preserve dead animals for necropsy, and two boats that can pick up animals from the water.

Director Bob Schoelkopf designed special nets to retrieve seals from the water and carry them to vehicles on the beach, Platt said.

Sometimes a large whale will wash up that cannot be moved. In that case, the necropsy is done right on the beach using antique whaling tools and knives, he said.

The types of sea life that sometimes get stranded or sick, include several species of seals and whales, dolphins and porpoises, and sea turtles.

He advised anyone coming across a seal on the beach to stay at least 150 feet away.

Platt said he can tell by a photograph if a seal is in danger or just resting by the way it is lying on the beach, he said.

“They are a protected species. We have to have a good reason to touch them, for example, if they are emaciated or sick,” he said.

He advised someone who might find an animal on the beach to first call the stranding center, who will then contact the local police to respond to the scene to control any crowds that might gather.

“Keep your dogs away from them. If they feel threatened, they will bite and tear up your dog,” he said.

And a bite to a human could cause serious infection, diseases and you could lose a finger, he said.

“A seal will chase you. They are aggressive and mean. Would you pet a bear cub on the beach? No,” he said. 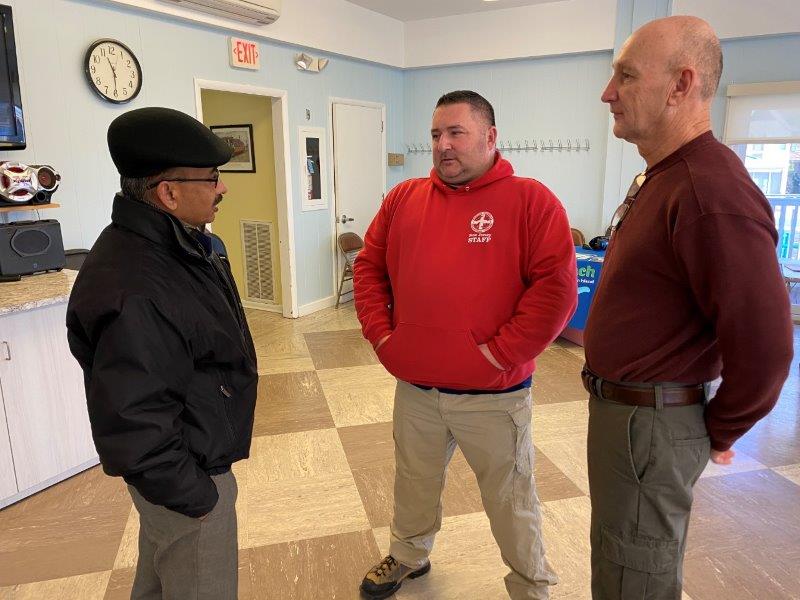 Any touching of the animal is punishable by wildlife protection laws.

“Any touching can be considered harassment if the animal changes its behavior in any way,” he said of the national law. “Whatever you do, don’t post any pictures or the location on social media. That will just attract more people to the animal, which is not what we want.”

Platt said one time, the MMSC responded to rescue a green sea turtle that was being kept as a pet in a drug house.

Other animals in distress could include manatees that swim upstream and can’t find their way out. Whales can wash ashore after being hit by large vessels and sea turtles can get entangled in fishing lines, swallow fishing hooks or eat helium balloons that have fallen into the ocean.

“You can’t believe how far the balloons can travel – all the way from Ohio,” he said.

Other types of pollution that endanger sea life include oil spills and plastic bags mistaken for jellyfish.

But it’s human interactions that can be most deadly, he said.

“A pilot whale was shot by boaters trying to shoo them away,” he said.

The shooter was required to do community service at the MMSC, he said.

Platt said the center handles about 100 animals a year but responds to many more calls. In rare instances, an animal might have to be euthanized as a last resort. Euthanized animals are incinerated or sent to special landfills where they are buried to prevent the spread of any diseases, he said. 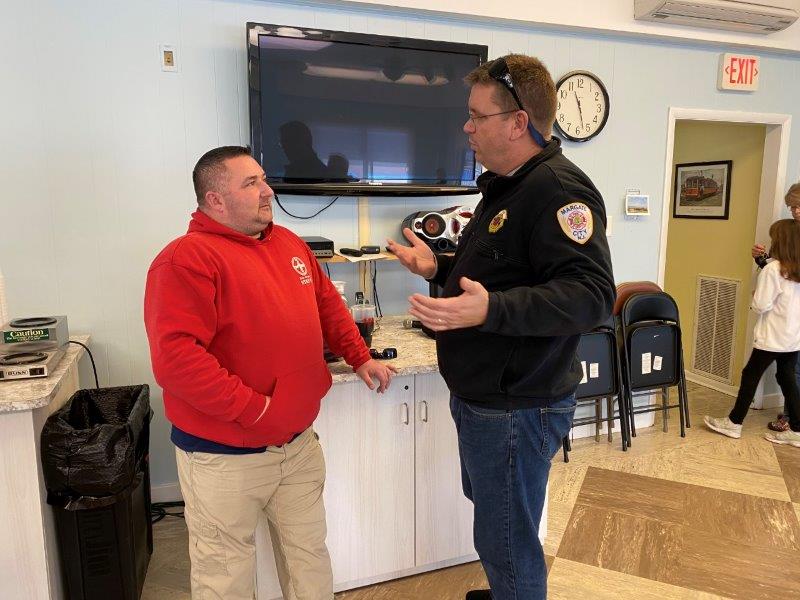 The MMSC is federally authorized to rescue and rehabilitate marine life for up to 14 days, but it does not receive any federal or state funds to do the job.

“We are pretty much funded by donations,” he said.

Donations are used to pay the staff, purchase medicines and food. A harbor seal can eat 9-20 pounds of fish per day, so donations are needed. The average cost to rehabilitate one seal can average $4,000 to $5,000, he said.

Learn more about how you can become a member or volunteer at mmsc.org.

Jasiecki said Sustainable Downbeach has several other programs lined up for 2020. The next event at 6 p.m. Tuesday, March 10 will feature a screening of the Galloway Township Environmental Commission’s film, “Twelve Tenacious Invasives” at the William H. Ross School. The film will provide expert guidance on plant selection that encourage pollination by bees and butterflies.

“Without pollinators, we have no food,” Jasiecki said.

A Master Gardener will be available to answer questions. Gardeners and landscapers are encouraged to attend. No pre-registration is needed. Light refreshments will be served.

For information, email sustainabledownbeach@gmail.com, or see Sustainable Downbeach on Facebook.