Published by Nanette LoBiondo Galloway on May 1, 2020 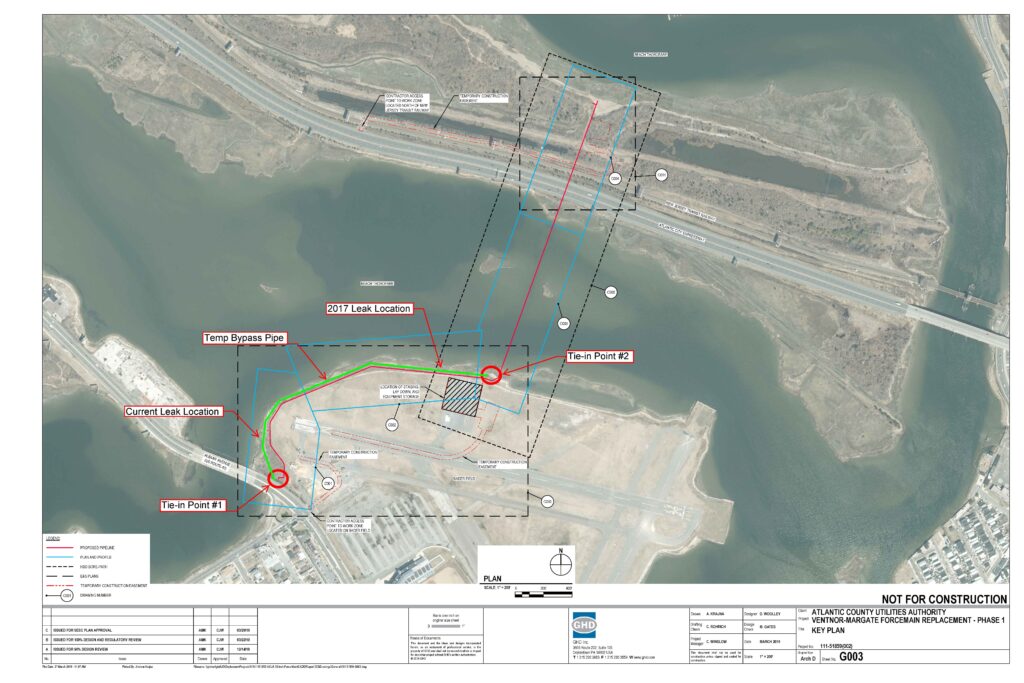 As previously reported, the New Jersey Department of Environmental Protection alerted ACUA to the leak Saturday, April 18. ACUA, along with Atlantic City health officials and emergency contractor Arthur Henry, were on site within hours to address the situation.

According to the ACUA, testing to determine when affected waterways may reopen for recreational activities will commence in the coming days.

Work to fix the leak began on Monday, April 20. Excavation, the delivery and fusion of 2,200 linear feet of pipeline, and the creation of two tapping pits were needed to install the bypass.

To mitigate contamination from the leak, ACUA increased sodium hypochlorite at its Longport and Broadway pumping stations, which provided added disinfection. Hay bales were installed along Beach Thorofare to further assist in filtering discharge.

The Atlantic City Health Department, in conjunction with NJDEP, performed enterococcus testing at 15 sites in nearby waterways to determine the impact of the leak. As expected, initial results were high near the site of the leak, particularly at sites 12, 13, 14, 15, 5 and 9 on the map below. It is expected the readings will decrease now that the bypass is in place.

Follow-up testing at these same sites will commence Monday or Tuesday, depending on weather and tides. At this time, the Atlantic County Health Department will also perform testing along Beach Thorofare at West End Avenue, Wellington Avenue and Ventnor Heights on Monday.

The temporary bypass piping will remain in place while the final work to replace the line continues. Replacement piping is being manufactured and should be delivered to the site mid-May. Upon delivery, work will begin on the installation of the replacement line. The work is expected to be completed in two months.

A leak occurred in a different section of this line in September 2017. Immediately following the repair, ACUA commenced design and permitting for its replacement. The design was completed, and ACUA was set to advertise for bids upon receipt of the final permits from NJDEP and other regulatory agencies.

With the occurrence of this leak, ACUA has been able to accelerate the process to complete the replacement using the design plans that were under review.