Published by Nanette LoBiondo Galloway on May 2, 2020 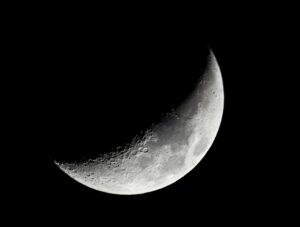 Steve Jasiecki/Both pictures were taken April 28, s seen through a telescope, Venus takes on the the shape of the crescent moon. 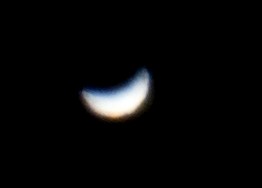 Venus, the bright point of light that had been putting on a show for us these past few months is now ready to leave the evening sky and head over to the morning.

Right now Venus’s orbit is closing in on Earth, therefore getting visibly larger.

But even though it is getting closer, the planet’s visible disk is shrinking. Like the moon, Venus goes through phases. It is becoming a thinner crescent reflecting less light and lessening its illumination.

It is now losing its brightness because we are seeing more of the night side of the planet and less of its day side.

Venus’s brightness is not only due to its closeness but also because of its high albedo. Albedo is the amount of light an object reflects. The more reflective its surface, the higher its albedo. An obvious example of albedo is how much brighter a landscape is when it is covered with snow as opposed to when it is not.

Venus’s high albedo is attributed to its thick cloud cover. Venus is shrouded in thick clouds with a dense atmosphere made mostly of carbon dioxide. This thick cloud cover reflects back 70% of the sun’s light. Conversely, the moon, which is made up of rock, only reflects 10% of sunlight. The moon being so much closer is able to make up for it’s low albedo.

The thick Venusian atmosphere traps the sun’s solar radiation and the heat cannot escape through its dense cloud cover. This greenhouse effect makes Venus the hottest planet in the solar system. Surface temperatures average around 864 degrees Fahrenheit with recordings as high as 880 degrees, this is hot enough to melt lead. The thick atmosphere also creates a high surface pressure. Standing on the planet’s surface is the equivalent to being 3000 feet below the ocean, enough atmospheric weight to crush a human.

Venus has been a case study of how the chemical composition of an atmosphere affects a planet’s temperature. Obviously, the Venusian atmosphere is inhospitable for life as we know it. Under these circumstances it doesn’t look like we will be visiting the planet any time soon.

So now we look towards Mars. Quite a bit colder but one we can visit with current technology.  Meanwhile, we can view it by social distancing. Something we are unfortunately getting accustomed to.

This is the third of a three-part series on the night sky.