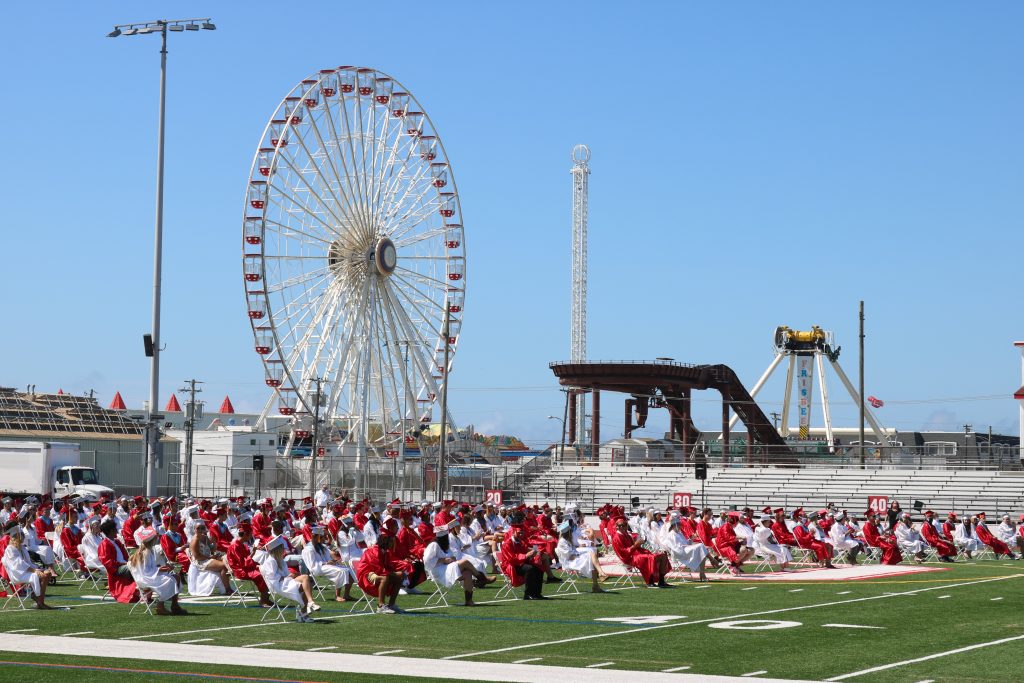 Determination, perseverance, and above all, uniqueness, are some of the qualities that make the Ocean City High School Class of 2020 stand out, Principal Matt Jamison told graduates seated in Carey Stadium to mark their milestone Thursday, July 9.

The graduates are unique in many ways, Jamison emphasized.

They were born in the shadows of 9/11. They started school during a recession and in middle school they faced challenges living at the shore when Superstorm Sandy hit in 2012.

Yet, through it all, the students’ unwavering strength allowed them to forge ahead and achieve great things, Jamison noted.

“The determination, the perseverance – the Class of 2020 has a true spirit of our nation,” Jamison said.

The graduation, which was one of the few in the state due to COVID-19, offered the students a commencement.

“This is for you,” Jamison said.

While parents and families were not allowed in the stadium until the very end of the ceremony, they stood outside the gates of Carey Stadium, whistled and applauded for their graduates, and celebrated.

Due to Gov. Phil Murphy’s order that there may be no more than 500 people assembled at an outdoor event because of the coronavirus, only graduates and school faculty were permitted in the stadium.

The ceremony was live-streamed for families and friends to view in real time at https://www.youtube.com/user/OCNJSchools. There was an 18-foot video screen in the parking lot adjacent to the stadium for parents to watch.

During the commencement ceremony, which began with a procession from Fifth Street and the Boardwalk onto the field, seniors Haley Stanks and Joshua Barnes gave farewell speeches.

Haley spoke of all of the accomplishments of the Class of 2020.

“We’ve been preparing to be seniors since September 6, 2016, and we truly left our mark on OCHS this year,” she said. “Though we never could have predicted that our last day of high school would be March 16, 2020, we all must remember what great memories we made during our high school years. What matters is not how much time we had but what we did with the time we were given together, and trust me, we’ve done a lot.”

“To me, our generation’s legacy is critical. I do not know about you, but I refuse to allow history to describe us as those who crippled the planet or allowed political gridlock to become the norm,” he said. “In order to effect real, and most importantly, impactful change, we must unite.”

Later in his address, he offered this advice to his fellow graduates, “As high school graduates, we must remember that we play for the same team: Team Humanity. Everybody in this arena today shares one goal, one passion, one desire: to make our lives, our country, and our world the best place possible.”

In all, the Class of 2020 included 325 students. Reflecting the school colors, girls wore white cap and gowns, while the boys dressed in red.

District Superintendent Kathleen Taylor recognized the graduates as exceptional. She noted that they are “savvy” and excellent communicators.

“Every generation looks to the next generation for leaders,” she said.

The Class of 2020 represented leaders.

“The leaders make decisions that are fair. They make wise choices. I know you are that generation,” Taylor noted.

She also recognized the families who watched from outside the stadium, waving her arms in the area.

“Now you are ready to make our community stronger,” she told graduates.

For Amara Mulloy, the day meant an ending of one important chapter, but the beginning of another at St. Joseph’s University in Philadelphia.

Surrounded by her friends and family who congratulated her, she said what the day symbolized for her.

“I’m so excited,” she said. “Having a graduation commencement made it feel like an ending.”

Jack Bogart of Sea Isle City and his best friend Liam Millar of Ocean City chatted with their new diplomas in hand.

“It was a nice ceremony, considering everything. At least they did something. A lot of the other schools didn’t have anything,” Jack said.

Jennifer and Jeff Shirk of Ocean City couldn’t wait to see their daughter, Juliette, after the ceremony to celebrate. Juliette will be going on to the University of Delaware.

“It was very nice that the whole class could see each other in person one last time,” Jennifer Shirk said.

“I thank the administration for how they put the kids first,” Kathy Reimet said.

Mark Reimet added, “It is such a cool feeling. Vacationers watching can see what a close community we are.”

The Ocean City Police Department assisted throughout the ceremony. School officials said that the event would not have been possible without the help of the Police Department, Mayor Jay Gillian, Board of Education and the city’s Public Works Department. 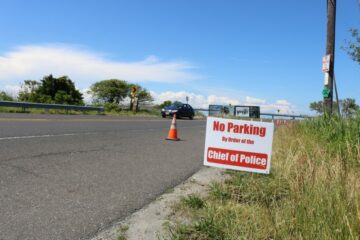 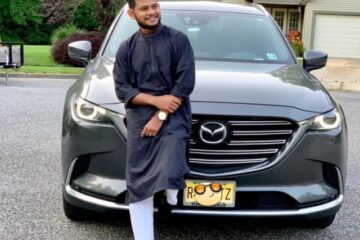 The Southern Regional Medical Examiner’s Office has identified the body of an adult male found floating in the Great Egg Harbor Inlet as Jabed Ikbal, 24, of Clementon, according to a new release. Ikbal entered Read more…