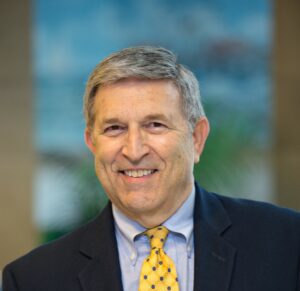 GALLOWAY TOWNSHIP — Martin H. Klein of Ventnor City this month celebrated his 50th year at Seashore Gardens Living Center. The occasion was commemorated by a special tribute edition of the center’s Boardwalk Express online newsletter where colleagues, staff, friends and family shared personal tributes and made donations in his honor.

Klein joined the staff  what was then known as the Hebrew Old Age Home in Atlantic City on July 6, 1970. The job was a temporary position to help out his neighbor Sidney Rosenberg, who was the home’s director, and as Klein awaited his teaching certificate. His certificate eventually arrived, but the Board of Education never alerted him, knowing that he was working in another job. That was the start of a lifelong career.

It didn’t take long for Klein to realize that he truly enjoyed a career where he had such an impact on enriching elder lives. Upon Rosenberg’s retirement, Klein became executive director, and later served as president and CEO, a role he continues to this present day. His wife Janice, who also works at SGLC, said that “in all of his 50 years, there was never a day that he didn’t want to come to work.”

Among his many accomplishments was the building of SGLC’s state-of-the-art home in Galloway Township, which opened in 2002, and Seashore Gardens affordable housing apartments. Over the years, he navigated hurricanes, blizzards, floods, fires, evacuations and now a pandemic.

Klein has served a series of very supportive directors and trustees over this span of half a century of success and growth. Tributes to Klein and his leadership have been entered into the permanent record of SGLC.

“Marty leads from the heart and the home and the residents are part of who he is. Whether it’s a hurricane, flood, storm, or any emergency, Marty’s dedication was always paramount,” Seashore Gardens Foundation President Richard J. Cohen said.

“We worked with Martin Klein as board members for over 40 years,” board members and past presidents Shirley and Howard Bernstein said. “He has been the right man for the job and has taken Seashore Gardens Living Center from an excellent facility to an extraordinary facility. He has set an example for the entire industry. Thanks, Marty, for your vision and hard work. Martin Klein will always be a synonym for Seashore Gardens Living Center.”

A formal tribute for Klein was originally scheduled for Nov. 21 at the Seashore Gardens Foundation Black and White Ball, but was postponed due to COVID-19. SGLC could not let the occasion go unrecognized, and organized the Boardwalk Express virtual tribute.

The Simon & Sylvia Zisman Seashore Gardens Living Center is a nonprofit home for the aged, guided by Jewish tradition, law and charity and dedicated to enriching the quality of life for its residents.