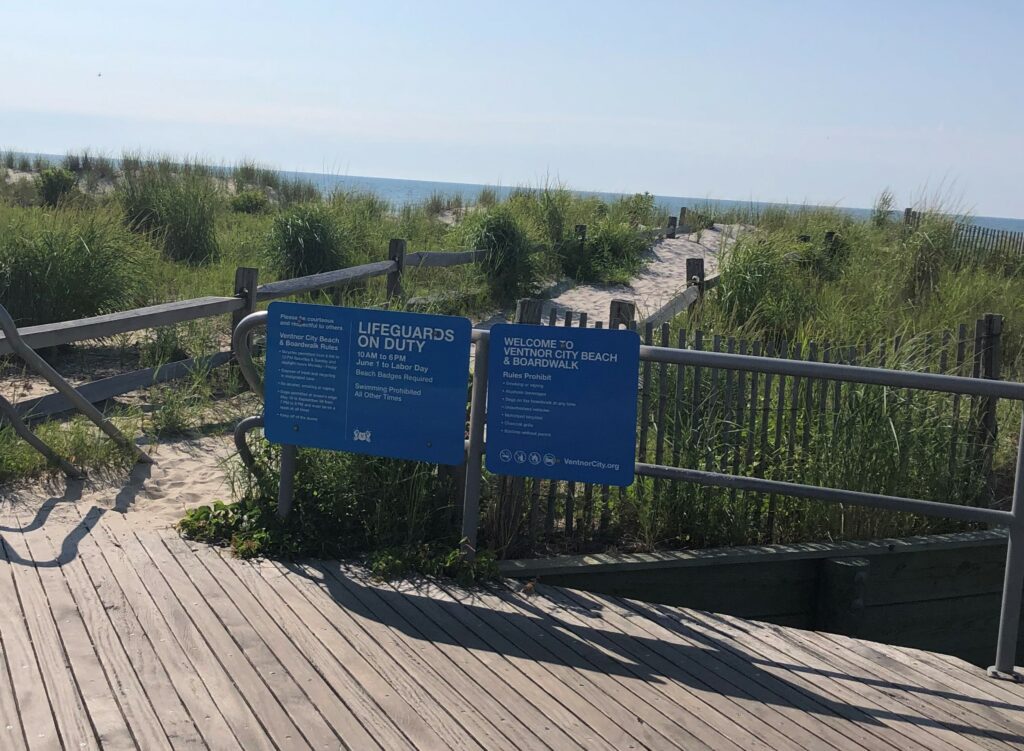 VENTNOR – The city is in the process of upgrading signage along the boardwalk that informs beachgoers of the rules and regulations to ensure all visitors safely enjoy the beach.

According to Commissioner Tim Kriebel, the old signage is out of date and confusing for beachgoers, who often question what activities are permitted and prohibited on the beach.

He said installation of the new signage, which has been a year in the making, would “clean up visual noise” on the boardwalk. 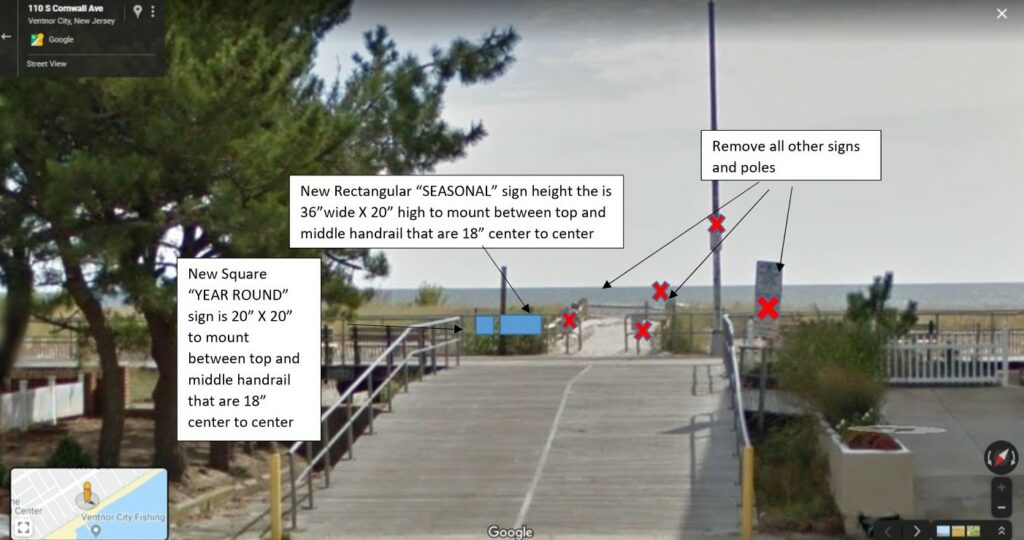 Numerous signs will be replaced with blue and white signs.

Kriebel said he worked with the city’s Public Works Department and a graphic designer to create the more visually appealing signs.

Many of the existing signage, some of which inform about regulations that are no longer valid, will be removed and replaced with a group of signs that more clearly indicate the rules.

The blue and white signs will be posted at all beach entrances. 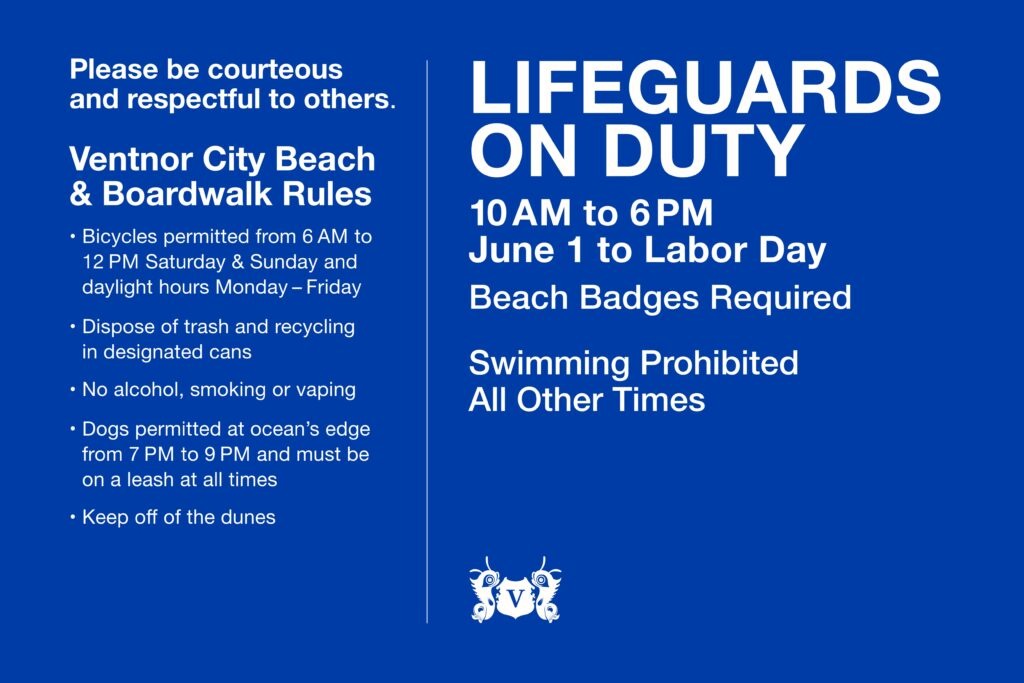 A 24- by 36-inch sign indicating swimming hours will be replaced at the end of the season with an off-season version indicating there are no lifeguards on duty and that swimming is prohibited. 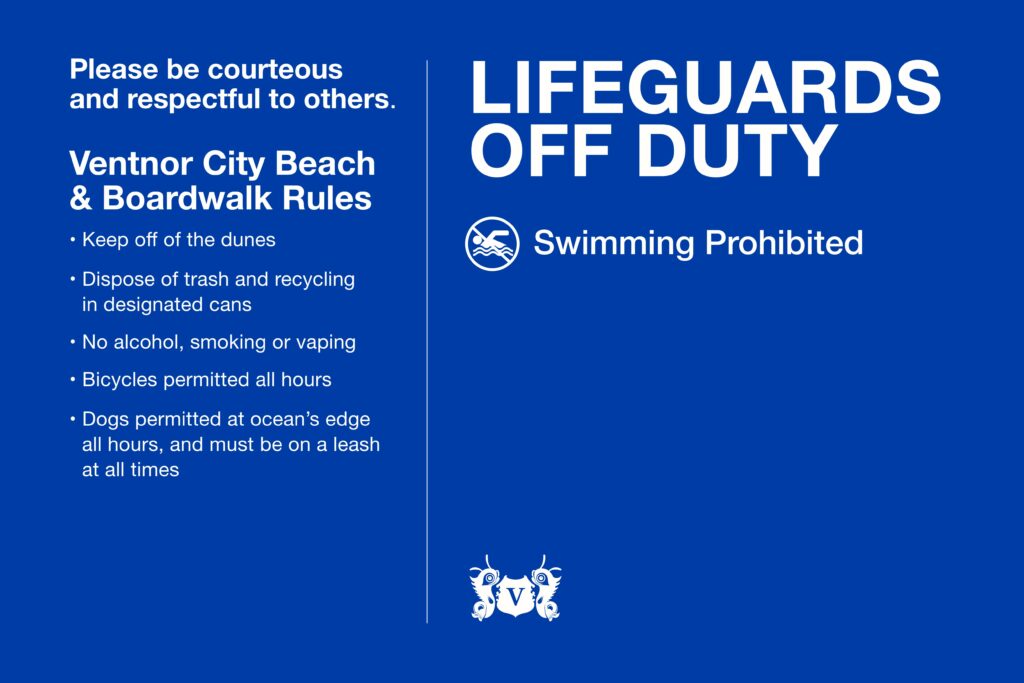 He said the new signage would be “a great improvement” over the multitude of signs currently on display.

The need for new signage was apparent during the public portion of the Board of Commissioners meeting Thursday, July 24 as several residents questioned commissioners about the regulations for dogs on the beach and boardwalk.

Leashed dogs are allowed on the beach at the water’s edge from 7-9 p.m. during the summer season and at any time during the off-season, but are never permitted on the boardwalk, residents were informed.

The new summer signage clearly states regulations banning alcohol and smoking in any form, times for riding bicycles and walking dogs on the beach. It also states lifeguards are on duty 10 a.m. to 6 p.m. and that swimming is prohibited at any other time.

The off-season signage states dogs are allowed at the water’s edge and bicycle riding on the boardwalk is permitted at any time and that swimming in the ocean is prohibited because there are no lifeguards on duty.

Both versions inform the public to stay off the dunes and to discard trash and recycling in the appropriate containers.

A second smaller sign measuring 24- by 24-inches outlining consistent information about what is prohibited will remain in place throughout the year. It states the following prohibited behaviors: smoking or vaping, alcohol of any kind, dogs on boardwalk, unauthorized vehicles, motorized bicycles, charcoal barbeque grills and bonfires without a permit.

In other business, Commissioner Lance Landgraf said he would be reaching out to restaurateurs to ensure they are abiding by social distancing guidelines by placing tables 6 feet apart and limiting tables to eight patrons, and for those who have set up tables along the sidewalks that they are allowing enough room for pedestrians to pass.

He said the city allowed restaurants some leniency in wake of the coronavirus pandemic, but the city has received some “pushback” from pedestrians and neighbors.

“We will ask them to ensure they are following state guidelines,” Landgraf said. “This is a learning curve for all of us.”

Kriebel said the city should work on creating a prototype of a “parklet” that can be installed on municipal roads, which can enhance the city’s reputation for becoming a “restaurant community.” The prototype would encourage restaurant owners to invest in having a parklet near their establishment.