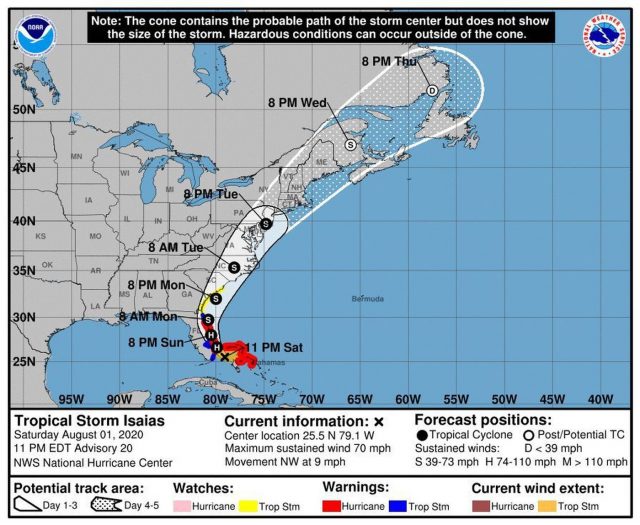 Tropical Storm Isaias is expected to lash the Jersey Shore with drenching rain, strong winds and flash flooding, according to the latest forecast by the National Weather Service.

Heavy rain leading to flash flooding is possible from Monday night through Tuesday night and is currently the primary concern with the storm, forecasters say.

“Rapidly rising flood waters may quickly inundate roadways and areas of poor drainage,” according to a weather alert issued by the Sea Isle City Police Department.

Rainfall totals of 3 to 5 inches are expected, with higher amounts likely in some localized areas.

Coastal flooding due primarily to heavy rain, especially around the time of high tide on Tuesday, is also possible, especially if the height of the storm occurs near high tide, forecasters say.

Tropical storm conditions with sustained winds of 39 mph to 73 mph are possible, primarily for coastal locations and the adjacent waters Tuesday into Tuesday night.

Forecasters are also warning of rough surf and dangerous rip currents at the shore from Sunday through at least Wednesday.