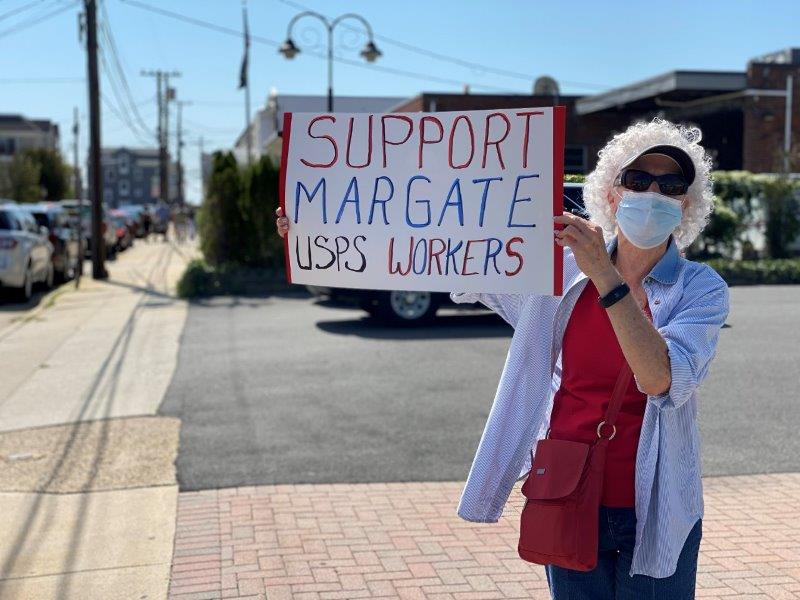 Margate Democrats hold a demonstration Sept. 3 in support of the USPS.

MARGATE – About a dozen members of the Margate Democratic Club turned out Thursday, Sept. 3 to demonstrate their support for the U.S. Postal Service. They showed up on a hot and humid day with handmade signs showing support for the letter carriers who pick up and deliver the mail every day at every household and business in the city. One woman who stationed herself next to the mail drop box across from the Franklin Avenue Post Office carried a black umbrella plastered with signs.

“We wanted to show solidarity and support for the Postal Service,” said Daiva Minter who organized the event. “Seniors rely on it for medications and it’s a vital part of our community.”

Atlantic County Freeholder Caren Fitzpatrick, who is vying to keep her at-large seat on the Board of Chosen Freeholders – soon to be called the Board of County Commissioners – Freeholder-at-large candidate Celeste Fernandez and U.S. Assembly candidate Amy Kennedy supported local Democrats’ efforts to bring attention to the slowdown in service ahead of the Nov. 3 General Election.

Minter vowed the demonstration would be a peaceful protest, and Margate City Police Department provided officers at the scene, but their protection was not needed as many motorists driving by honked in support of their effort. A postal worker stopped by to thank the group for offering support for the job they do for Margate and the rest of the country.

Minter said she noticed recently that mail delivery had become infrequent and that some mail was being delivered to the wrong household. She said it was an obvious sign that new, part-time employees were delivering her mail.

She even put a pink ribbon on her mailbox to ensure the letter carrier picked up the mail she was sending.

“I wonder if my mail is sitting in someone else’s mailbox who is a part-time resident,” she said.

Minter, who is a photographer, makes her own greeting cards and sends them to family and friends.

“It took 15 days for one of my greeting cards to reach a friend in Philadelphia,” she said.

Arthur Slomine, president of the local Democratic club, said he believes efforts are underway to dismantle the Postal Service “just when the election is starting to heat up.”

Voting in New Jersey will be primarily by mail, according to Gov. Phil Murphy’s Executive Order.

“The president is making it seem like vote-by-mail is not dependable and fraught with fraud, and that’s not true,” he said. “The Post Office is a lifeline for many people who need medications, are homebound or don’t use computers. The people who depend on it most won’t get the services they’ve gotten since birth.”

Slomine said not only are residents impacted by the slowdown, but businesses are feeling the effects as well.

“That doesn’t make sense because package delivery is profitable for the Post Office,” he said.

Linda Goukler said she is “old fashioned” and still sends cards and memories of her life to relatives.

“I want them to remember my history, so I am here to support what started with the good old Pony Express,” she said.