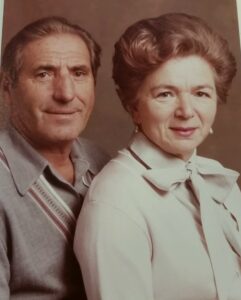 Jadzia and David Greenbaum, and a family photo of their descendants, provided with permission of Ann Rosenberg.

GALLOWAY TOWNSHIP – The daughter and son-in-law of Holocaust survivors have endowed Stockton University with a $25,000 scholarship fund to assist students interested in Holocaust and genocide studies.

Ann and Howard Rosenberg created the Jadzia and David Greenbaum Memorial Scholarship to honor Ann’s parents, who met and fell in love in a displaced person’s camp in Germany after World War II.

Natives of Poland, the Greenbaums survived labor and death camps and later immigrated to America, settling in New York City. In 1951 they bought a chicken farm in the McKee City area of Egg Harbor Township. In 1957, they moved to Atlantic City, then in 1978 moved to Margate. During those years they built a successful construction business and raised four children. Jadzia was an active member of the Sara and Sam Schoffer Holocaust Resource Center Executive Committee at Stockton.

Last summer their daughter Ann, and her husband, Howard, who live in Toledo, Ohio, visited the Holocaust Center during a trip to Atlantic City.

“Everyone there was so excited about what they are doing and they told us about the programs and new exhibits and how students were involved,” Ann Rosenberg said. “When we went home, Howard and I started talking about a scholarship.”

Ann Rosenberg said her father never talked much about his experience during the war, but her mother did.

“I knew they were both Holocaust survivors, and most of their friends were also,” she said. “There were three families on our block who were all survivors.”

The Holocaust Center is currently developing a digital exhibition of South Jersey Holocaust survivor stories. One special exhibit will focus on survivors who came to South Jersey to operate chicken farms in Atlantic, Cape May and Cumberland counties.

The first scholarship will be awarded in the 2021-22 academic year and is open to undergraduate and graduate students who have shown a demonstrated interest in Holocaust and genocide studies and are in good academic standing with a GPA of at least 3.0.

Ann Rosenberg said she and her husband are also planning a second scholarship for Stockton students from Atlantic City in memory of Howard’s parents, who owned a grocery store in the city.

“We hope this might inspire others,” Ann Rosenberg said of the scholarships.

Leo Schoffer, chairman of Stockton University’s Board of Trustees, said that he had the pleasure of knowing Jadzia and David Greenbaum.

“I feel they would be proud and touched that their children value the remembrance of the Holocaust, and have created a scholarship for students dedicated to preserving the memory of those who perished in the Shoah,” Schoffer said. 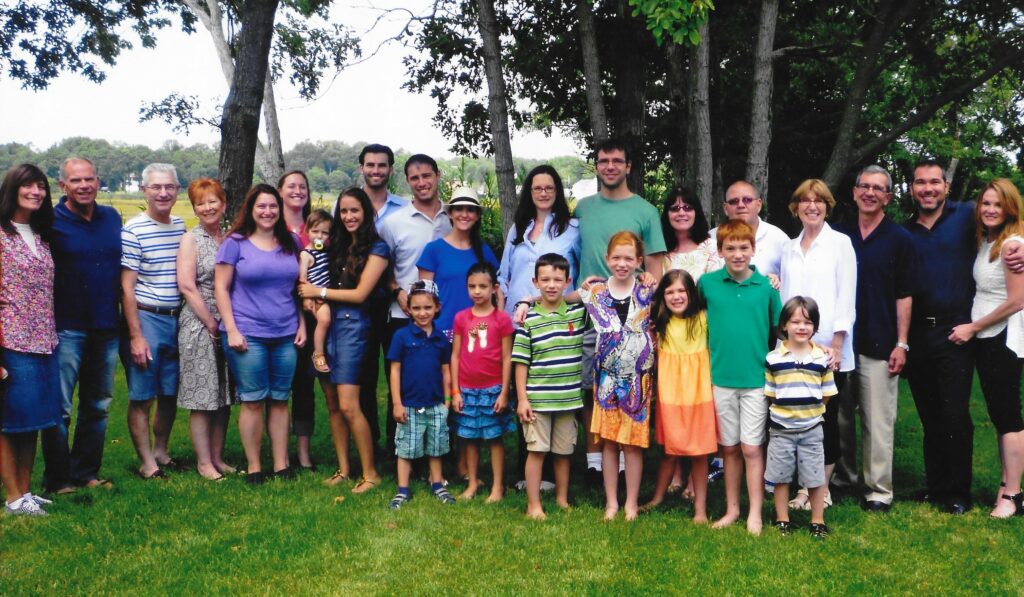 Jadzia (Jeanette) Altman Greenbaum was born in Będzin, Poland on July 23rd, 1925. In 1942, she was taken to a slave labor camp at Grünberg, Poland and was later moved throughout camps in Poland and Germany. She survived a death march that ended in Bergen-Belsen. She was near death at liberation. Soon after, she was told that the other members of her family had not survived. After the war, she went to the Zeilsheim Displaced Persons Camp where she met David.

David and Jadzia were married in 1946. They immigrated to America in 1949 where David worked as a furniture maker in New York City until 1951 when they bought a chicken farm in McKee City, New Jersey. In 1957 they moved to Atlantic City, then in 1978 moved to Margate. During those years they built a successful construction business and raised four children. Both Jadzia and David Greenbaum were resilient, coming to America after the war to start a new life despite limited funds and no employment. In spite of the evil they had endured, they were kind and loving people who taught their children and grandchildren to judge people by their actions. They were exemplary role models. They were both active leaders in the Jewish community. David, who died in 1994, and Jadzia, who passed away in 2013, are survived by their four children, Rita Bohan, Abraham Greenbaum, Carol Greenbaum and Ann Rosenberg, seven grandchildren, and 12 great-grandchildren.

PHOTOS:  Jadzia and David Greenbaum, and a family photo of their descendants, provided with permission of Ann Rosenberg.