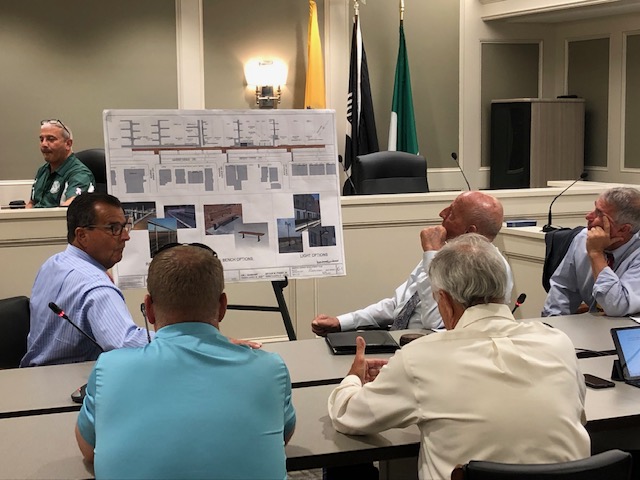 File/Margate commissioners heard a presentation Aug. 1, 2019 on a concept plan for a promenade on Amherst Ave.

MARGATE – The Board of Commissioners Sept. 3 reviewed final plans for the Amherst Avenue promenade it plans to build in the fall and winter months.

The promenade, which will connect the marina district with the Washington Avenue pedestrian walkway and the central business district on Ventnor Avenue and the Lucy the Elephant tourism district on Atlantic Avenue, was recommended in the city’s 2016 Master Plan Update.

Arthur W. Ponzio and Jon Barnhart of Arthur W. Ponzio Co. and Associates of Atlantic City presented the final design, which includes an elevated timber structure 2-feet off the ground on the landward side of the recently completed bulkhead. The width of the walkway spans 10-13 feet and will be constructed of ipe hardwood, which will “last a long time, and have a stout structure.” Barnhart said.

The railing system will be made of stainless steel and cable, or aluminum, depending on cost. Handicapped accessible ramps will be located at Jefferson, Madison and Monroe avenues, with stairs at all other intersections. All will have striped crosswalks.

The promenade will span Amherst Avenue from the Barbary Coast Marina being built by James Leeds to Lamberti’s restaurant currently under construction at Sunset Bay Marina. Both Leeds and Sean Gormley, who is planning to build a restaurant and marina next door on the old Capt. Andy’s Marina site, will be required to extend the promenade across their properties at their own cost.

Amherst Avenue will look quite different by next summer and it may take an educational campaign to educate motorists and bicyclist that one-way means just that – you can only drive or ride one way on the redesigned roadway.

Although bicyclists are required by law to travel in the same direction as the vehicles on one-way streets, Commissioner Maury Blumberg expressed concern that bicyclists might try to travel both ways in the bike lane, which could become “a dangerous situation.”

“I’m happy if we set ourselves to educate and enforce. We have to insist bikers ride the right way on that street and other streets in the city. It’s crazy dangerous in summertime with bikers riding the wrong way,” he said.

He also suggested seeking a grant to hire several full-time Class 2 police officers to patrol the area on bicycles.

“If we can control bikers, it would be the biggest surprise of my life,” Becker said, admitting that the cost of hiring extra police may be warranted to enhance “public safety.”

Ponzio said restriping would convert the now two-way street into a one-way street with an 8-foot wide bicycle lane that begins at Washington Avenue and ends at Jefferson Avenue, with traffic flowing west toward Longport. Parallel parking on the opposite side of Amherst Avenue will be maintained.

The plan incorporates the safety recommendations made in a traffic study conducted by Shropshire Associates, LLC, a traffic engineering firm. Traffic counts show that more motorists travel toward Longport than toward Ventnor.

The existing parking area will be angled for easy access, and there will be two decorative bollards at each parking space to protect pedestrians, Barnhart said.

He said he visited Amherst Avenue on Thursday during the Margate Community Farmers Market and all but one rider rode where the bike lane will be located.

“It’s the natural location for people to go,” he said.

The lighting plan includes a double-head light fixture and a bench at 50-foot increments.

“It will be a nice, bright and comfortable place to be at night and during the day,” Barnhart said.

Public Works Supervisor Frank Ricciotti requested that trash and recycling containers be limited in size to 20-gallons to prevent residents and visitors from stuffing their household trash into receptacles meant for public usage.

The project is being funded through General Capital Bond Ordinance 02-2020, which appropriated $2,826,850 for various improvements to city properties, including the promenade, building an addition and refurbishing Fire Station No. 2, and installation of a new roof, hallway remodeling and security upgrades at the Margate Municipal Building.

Last year, the city awarded a $1,599,164 contract to Trident Piling Co., LLC of Longport to rebuild the last remaining deteriorated section of the city-owned bulkhead.

The city expects to go out to bid and award a contract in October, with the work completed by Memorial Day.