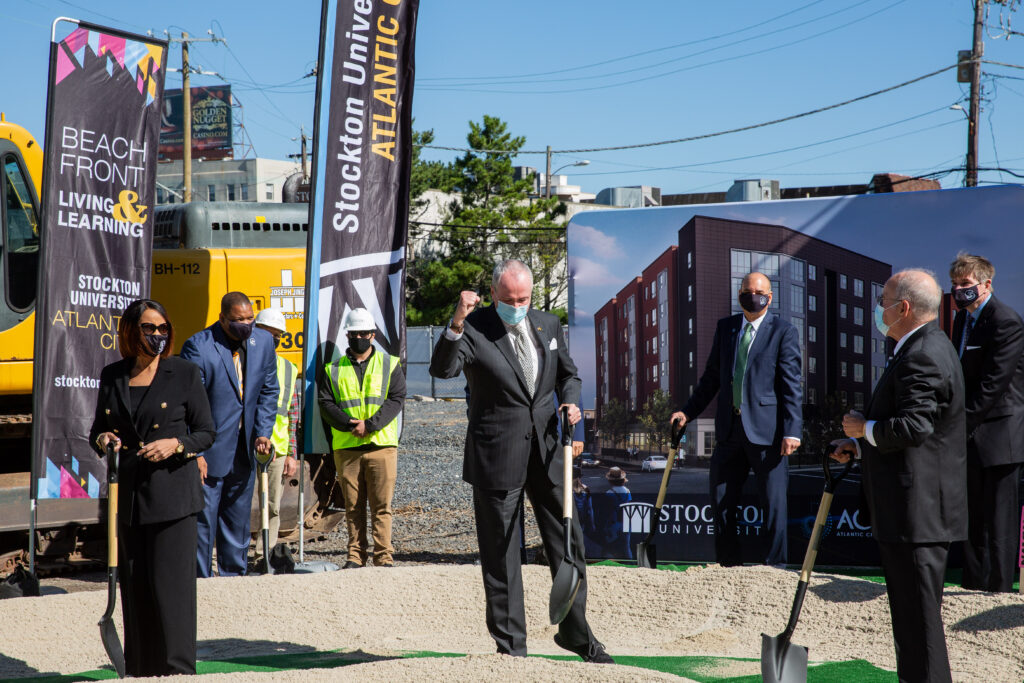 ATLANTIC CITY – A dozen people spoke at the groundbreaking for the Phase II Residence Hall at Stockton University Atlantic City on Wednesday, and each represented a crucial element in making the project a reality.

“I can’t wait to see this take shape,” Gov. Phil Murphy told approximately 150 guests at the outdoor ceremony held in O’Donnell Park, across from the Stockton Atlantic City campus. “It will create good jobs today, help prepare the next generation, and diversify the economy of Atlantic City.”

Murphy said the future of Atlantic City is p 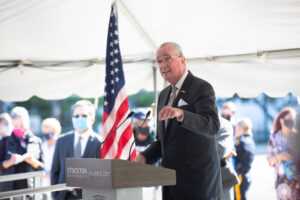 owered not just by gaming and entertainment, but by academia, entrepreneurship and the arts.

Multiple speakers acknowledged the bipartisan cooperation and partnerships among city, county, state and university officials who have made Stockton Atlantic City a reality and now are helping it grow.

“I have come to know this town intimately and Atlantic City is a great town,” said Lt. Gov. Sheila Y. Oliver, who said the expansion of Stockton will lead to expansion along the entire University District corridor. 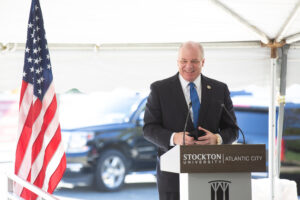 Kesselman said the expansion is just another step in the university’s commitment to the city.

“This shows our confidence not just in Atlantic City, but in the great state of New Jersey,” Kesselman said, citing the opportunities it would provide for students from around the state.

State Sen. Chris A. Brown said the event was not just good for Stockton, but for local families and their children.

“This is an awesome occasion and a great opportunity to show bipartisan support,” Brown, a Republican, said.

“No level of government could do this by itself,” said Atlantic County Executive Dennis Levinson. “We all have to pitch in and be partners. I am so happy to be a part of this.”

“We have to keep making announcements like this,” said Small, a Stockton alumnus. “I look forward to residents taking advantage of this fine institution, just as I did. You could not ask for a more incredible group of people to take care of your children.”

Assembly Majority Leader Louis D. Greenwald said despite the challenges the state is facing, the groundbreaking creates hope for the future.

“We are passionate about Atlantic City as a destination and a jewel,” he said.

Stockton Board of Trustees Chair Raymond R. Ciccone said the Stockton Atlantic City campus was a success from the day it opened in September 2018, and the student housing on the Boardwalk there is the most popular among students.

“The housing from day one was at capacity and I am sure this one will be also,” he said.

He cited programs offered in the city, including the Master of Social Work and Master of Business Administration, which provide clinical opportunities in the city.

Referencing an early motto of Stockton to “plant yourself where you can grow,” Ciccone said

Stockton has planted itself in Atlantic City and will continue to grow there. 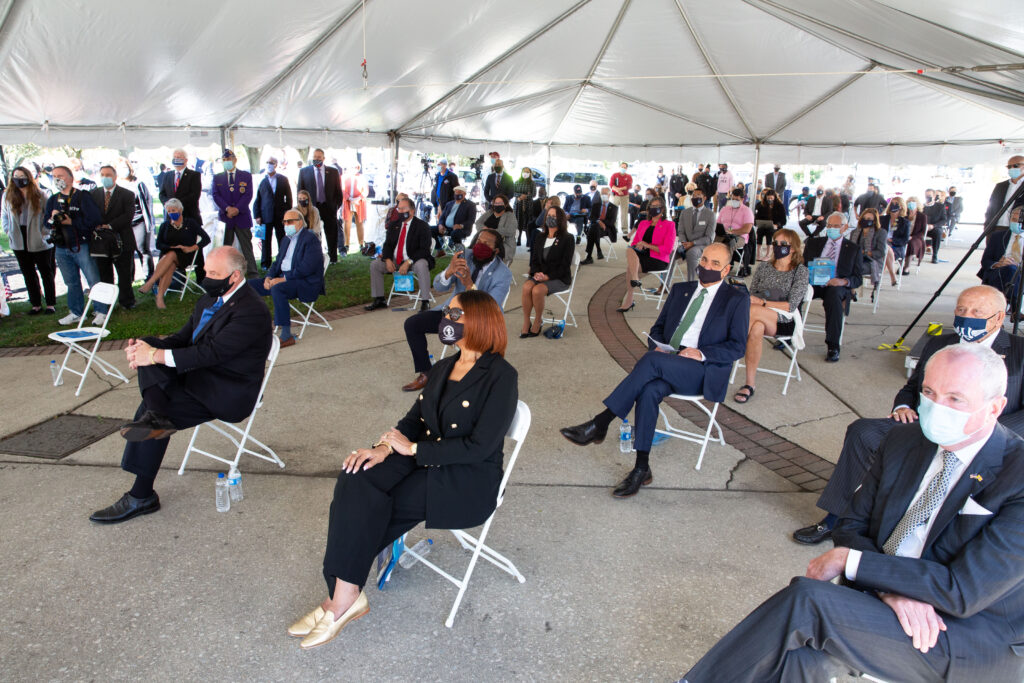 Jon Hanson, chairman of the board of AC Devco said their mission is to make Atlantic City a better place.

“None of this would have happened without all of the people who spoke here today,” Hanson said. He is already looking ahead to a potential future development on the lot now used for commuter parking and would like to see an anchor partner like South Jersey Gas locate there along with student housing and retail.

“When one thing starts, you have to start planning the next one,” he said.

Stockton Interim Provost and Vice President for Student Affairs Michelle McDonald said while the event was for a building, the space is just the beginning.

“It’s the people who use the buildings that we also celebrate,” McDonald said. She said over the last two years Stockton has demonstrated its commitment to Atlantic City, and those in higher education must also challenge themselves to prepare students for the future.

“We are educating then next generation,” she said.

Katharine Campion, Stockton Student Senate president and a representative of that generation said she and other students are “ecstatic” to see the campus grow.

A North Jersey resident, she said she visited Stockton at the recommendation of a family member and “fell in love.”

She said Stockton is not just a college, but “also a home and a safe place for students that provides the resources we need to flourish.”

The ceremony and groundbreaking were set up to accommodate social distancing guidelines and masks were required except while invited speakers were speaking. The ceremonial shoveling took place on the site of the new Residence Hall, which is targeted to open in 2023. 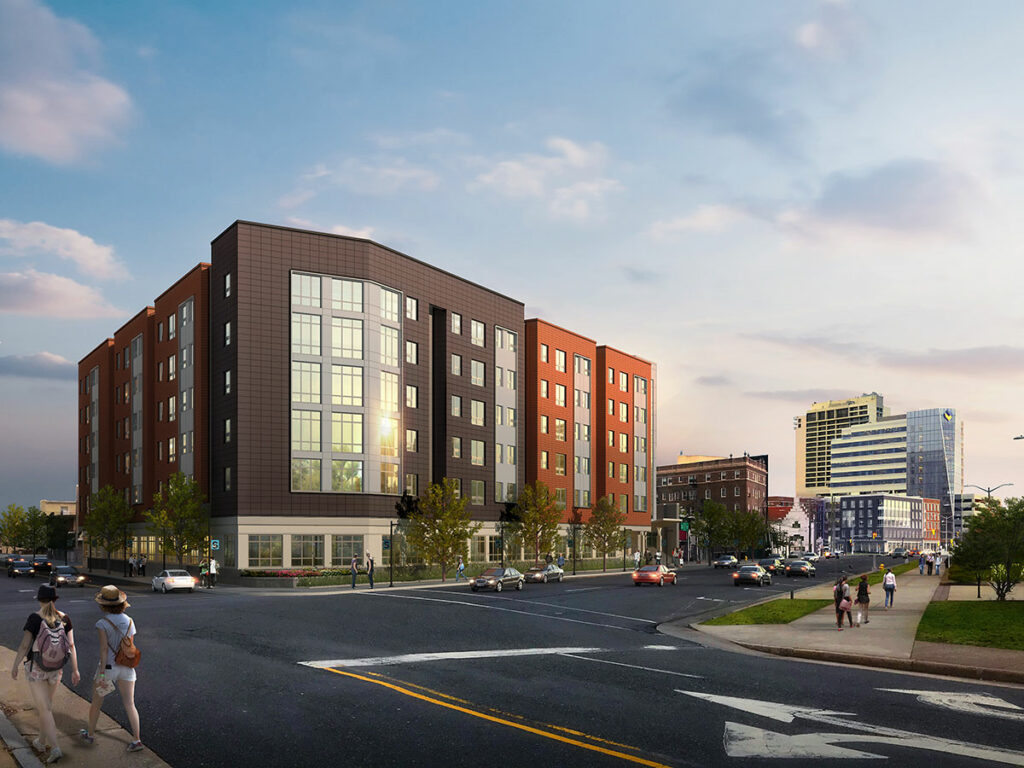 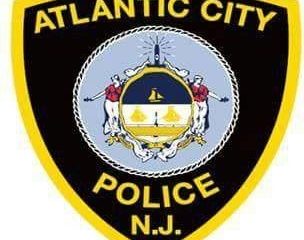 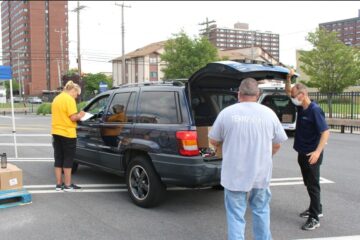 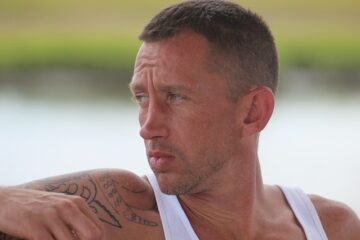