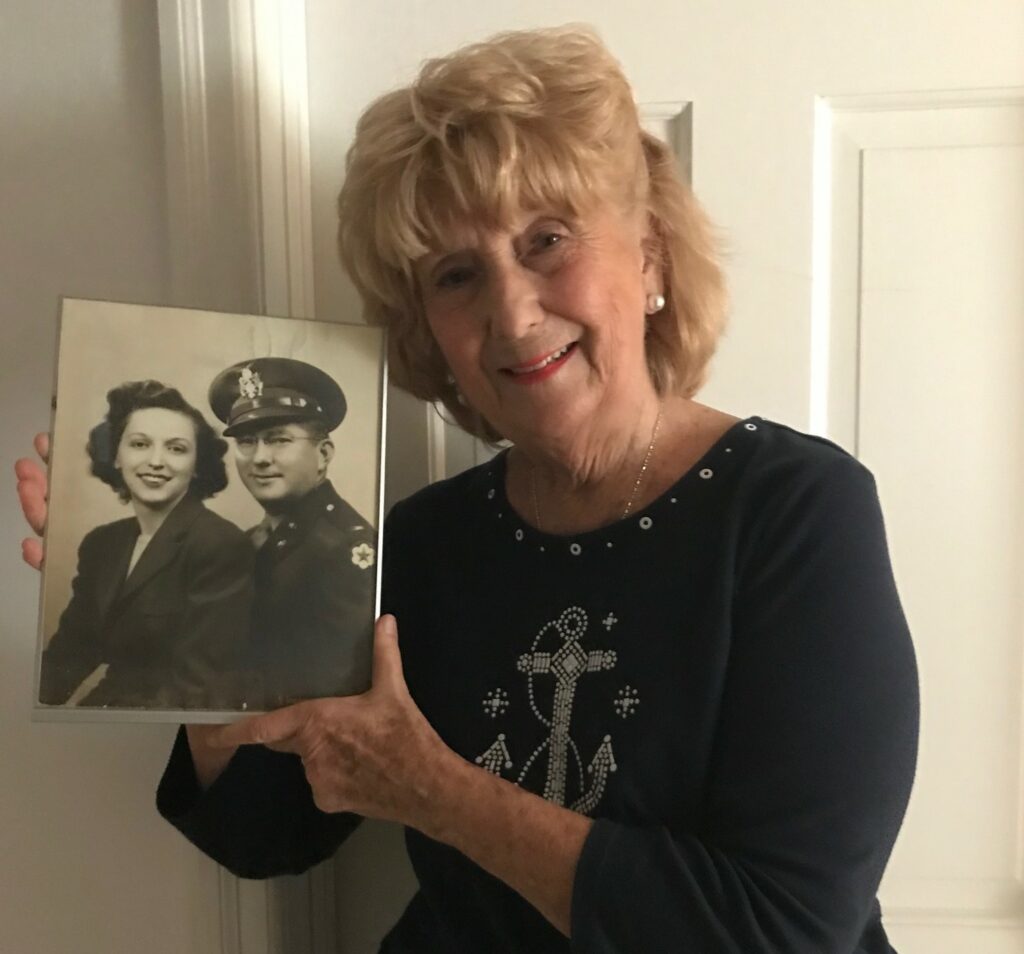 Georgianna Ross of Ventnor holds a photo of her parents Rita and George F. Scott, who served during WWII.

LONGPORT – When American Legion Post 469 holds its annual Veterans Day service 11 a.m. Wednesday, Nov. 11, it plans to continue its tradition of laying engraved bricks in memory of those brave men and women who have served in the Armed Forces.

This year’s ceremony will include the installation of three memorial pavers in memory of three local military veterans at the base of the borough’s Memorial Monument, a sundial that depicts various historical events throughout the nation’s history.

American Legion Auxiliary member Georgieanne Ross of Ventnor will be there to honor her father George F. Scott Jr., who served in the Army Air Corps during World War II, and her six-times great-grandfather, Michael Fackenthal, the son of German immigrants who settled in Bucks County, Pennsylvania, and fought in the Revolutionary War under George Washington’s command.

She discovered Fackenthal during her quest to trace her lineage on Ancestry.com.

“As soon as I discovered him, I became a member of the Daughters of the American Revolution,” Ross said. “Because of camp fever, which we believe is typhus, his unit did not go to Fort Washington to fight, which is why I am here today.”

She explains her mission to trace her ancestors who she always believed “were here for a long time,” she said.

“When I started looking, I wasn’t finding anything, so I went with one of my grandmothers. I was curious about the last name. From there, it was like a knife through butter,” she said.

Her research showed that Grandfather Fackenthal enlisted a year before he was called to duty to serve in one of Washington’s “flying camps” – small groups of men who were mobile and could be sent anywhere Washington needed them, she said.

“This flying camp was out of Bucks County and fought in New Jersey and Long Island, New York,” she said.

Ross learned that to fool the British, Washington ordered his soldiers to start small campfires to make them think that they were still there, she said.

Ross confirmed her six-times great-grandfather’s service through pension records. She even found his tombstone in Union Cemetery in Durham, Pennsylvania. 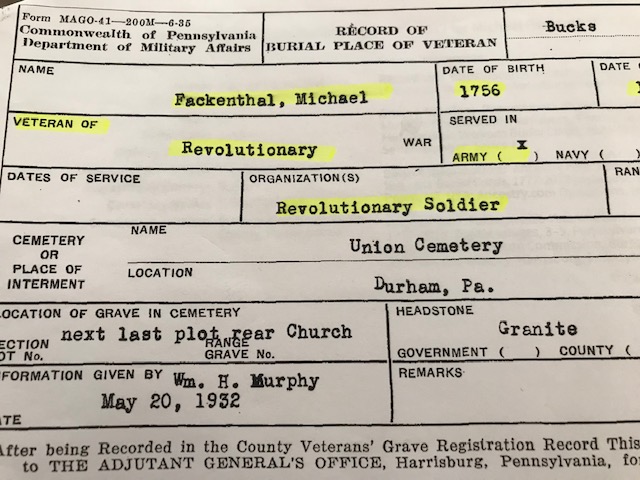 Michael Fackenthal, a Revolutionary War soldier, will be honored in Longport on Veterans Day.

Fackenthal was born in Bucks County in 1756, where the book, “History of Bucks County,” mentions her ancestor.

“When the Revolution broke out, Michael Fackenthal espoused the cause of the colonies and shortly enrolled himself,” the book states. “It is related that when called upon to enroll, he was in the harvest field, but cutting his sickle into the post, signed his name at the head of the Springfield Associates.”

Fackenthal was 19 when he joined the flying camp to be deployed at the General’s command. He was appointed a sergeant under Col. Joseph Hart of Warminster, and fought mostly in New Jersey and New York, including at the battle of Long Island, where he and other members of the company captured several Hessians in the early fall of 1776, Ross said.

Although his company was ordered to help defend Fort Washington from impending British invasion, he came down with camp fever and didn’t march with his comrades.

“The Battle of Fort Washington was a disastrous loss for our patriots,” Ross said. “Men were either killed or taken prisoner and put in prison ships, like the infamous ‘Jersey’ where most never survived.”

She said “dark days” followed until one bitter cold December night when Washington led his troops across the Delaware to surprise the British on Christmas Day in the Battle of Trenton – “a turning point in the Revolution.”

During the course of the Revolution, Fackenthal would enlist twice more, “fighting to make our country free,” Ross said.

Fackenthal went on to become a lawyer serving his community.

“Still alive when pensions were offered, he was able to get a small ‘Thank You’ from our government,” she said.

She credits Fackenthal with her existence today.

“All of the glory goes to Michael Fackenthal and ‘putting it on the line’ to help create a new nation,” she said.

Her father will also have his name engraved in a brick at the base of the monument.

Born in 1907 and drafted during WWII at the age of 36, Scott was part of Ventnor’s “quota” of men to be drafted and went to basic training with men half his age.

“After basic, Mom and I followed Dad all over the U.S., as most families did then, not knowing when the ‘shipping out’ order would come,” she said.

When it did come, he was sent to the Pacific Rim. Learning of his knowledge of Mores Code, the Army sent Scott to Officer Training School at Monmouth College in New Jersey, where he graduated as 2nd Lieutenant in the Army Air Corps, which today is the Air Force.

“George’s early life was not good and at age 16, he ran away from home, becoming a sailor on a steamer running up and down the East Coast. He was young, he was adventurous, and they taught him Mores Code, which 20 years later would save his life,” Ross said.

The children came and the family followed him base to base until he was shipped to Guam, where he offered support for B-29 pilots fighting the Japanese.

“Dad remained there for the rest of his tour until he was contacted by the Red Cross,” after her brother Steven came down with polio.

“The Air Force shipped Dad back to Ventnor so he could care for his family and the son he had to leave behind,” Ross said.

Scott retired as a 1st Lieutenant in the U.S. Air Force, returned to his job as a salesman for Hurly -Jones in Atlantic City. Eventually, he purchased his own jitney, shuttling riders through America’s Favorite Playground.

Scott remained a member of the Ventnor VFW and the Power Squadron until he died in August 1969.

“On Veterans Day, my brother George Steven and I will honor our father as we place his paver among the other heroes who fought to keep us free.”

Earl Mulligan Sr., a U.S. Army Vietnam War veteran will also be honored with a paver. His wife Eileen and their children, Earl Jr. and Kyleen will be present for the paver installation.