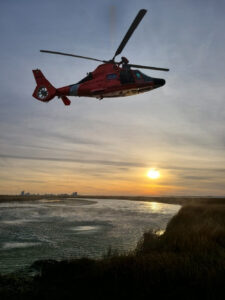 Aircrew from Coast Guard Air Station Atlantic City prepare to lower the basket to retrieve two stranded hunters, Dec. 15 near Brigantine. The hunters had lost their vessel while hunting and were unable to be reached by boat. (U.S. Coast Guard photo by Petty Officer 3rd Class Roberto Ochoa)

BRIGANTINE — The U.S. Coast Guard rescued two duck hunters Tuesday, Dec. 15 after they became stranded on an island while hunting near Little Egg Inlet in Brigantine.

Watchstanders at Coast Guard Sector Delaware Bay received a call from Sea Tow around 3 p.m. that two duck hunters had disembarked their vessel to hunt on an island but were unable to recover their boat upon return. Due to the shallow water surrounding the island, Sea Tow was unable to reach the individuals.

Watchstanders launched an MH-65 Dolphin helicopter aircrew from Air Station Atlantic City. Once on scene, they discovered the hunters with only one bottle of water, no food and cell phones with little charge left. The air temperature was close to freezing and the sun was setting. The aircrew hoisted the two hunters and brought them safely back to the air station.

“This case could have had a much different result,” said David Umberger, command duty officer at the Coast Guard Sector Delaware Bay Command Center. “The water is an unpredictable place and a potentially fatal place for the unprepared, especially given the freezing water temperatures this time of year. Anyone thinking about heading out on the water should be prepared with a life jacket and some type of marine radio that can reach Channel 16 so that we can find them quickly in an emergency.” 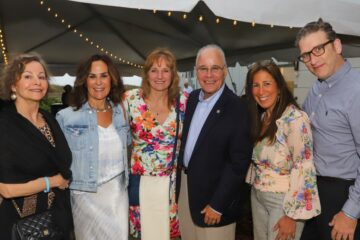