Cristina Barbella, 16, of Ventnor, proposes the ‘Sweep the Shore’ campaign to the Board of Commissioners, Jan. 28.

VENTNOR – She is only 16, but Cristina Barbella, who like most teens enjoys going to the beach with her friends, is already working to make an impact on her community.

The Ocean City High School student proposed to the Board of Commissioners Thursday, Jan. 28, a simple but effective way to improve the marine environment and ensure residents and visitors can enjoy the beach.

“I got the idea when I visited my aunt and uncle in North Carolina,” she said. “We all go for long walks on the beach and always bring trash bags to collect trash or cigarette butts.”

Barbella said she visited Sunset Beach, North Carolina, when she was there and noticed there were shopping baskets hanging from posts at beach entrances, which were being used by beach walkers to pick up trash.

She thought it was a great idea to replicate in Ventnor, and contacted Sunset Vision, the non-profit organization responsible for instituting the program in their area.

Pete Larkin, who is a member of the organization, said Sunset Vision looks for projects to do that make the community better. Members who are looking to “give back” to the community come up with ideas, fundraise, and then implement the programs. 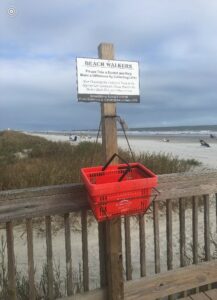 Larkin said the group installed posts that hold three or four market baskets in two strategic locations to engage citizens and visitors to pick up litter when they walk in the early morning and evening hours. The stations include a small sign with instructions and their website address.

When the project first started, Sunset Vision put out six or more baskets, which have their logo printed on them, but people were taking them as souvenirs. That problem was abated when they decided to put out just a few baskets.

Like Ventnor, Sunset Beach is a resort community with about 4,000 year-round residents that swells to about 17,000 in summer.

“Litter on the beach is a concern,” he said. “We asked that while walking, they grab a basket, pick up trash and butts, deposit it in the appropriate trash or recycling container, and return the basket when they are through.”

Larkin said the program has been a great success since it was instituted 18 months ago.

“It’s very popular,” he said. “People are so impressed with it that they send us money so we can do other projects.”

Barbella impressed the commissioners, who agreed to replicate the program at specific beach entrances by summer. She is calling it “Clean the Coast” or “Sweep the Shore,” but if someone has a better name for it, she is willing to listen. She said she would like to see it be a year-round effort.

“Just because it’s cold outside is no reason not to walk on the beach. And litter knows no seasons,” she said.

They discussed costs, which are minimal but can make a big impact, and agreed to erect the litter stations in the most populated areas. Discussion included soliciting local businesses to adopt a station.

“I saw the idea and thought it was really cool,” Barbella said. “It could be a great way to encourage children to be caretakers of the environment as well.”

Mayor Beth Holtzman said she is not surprised that Barbella came up with the idea. She commended her for doing a “wonderful job researching and presenting” the program to the community.

“I love the idea,” Commissioner of Public Works Lance Landgraf said. “Let’s try it out.”

He said the Public Works Department could easily make the litter stations and place them near trash receptacles, which were donated by the Ventnor Beautification Committee several years ago.

If the project is successful in Ventnor, Barbella hopes to branch out to other Absecon Island communities, including Margate and Longport, she said.