The North Beach area intersection is of particular importance since conditions at this intersection were brought to the city’s attention by a visually impaired resident.

Audible crossing systems are proposed to assist visually impaired residents and visitors, as well as make this busy intersection safer for all. The planned improvements also include leveling and replacing sidewalks where needed, providing Americans With Disabilities Act-compliant ramps at each corner, and installing thermoplastic traffic striping.

“Over $2 million in grant funds will be invested in this important business district in the next year,” Commissioner of Public Works Lance Landgraf said in a release. “Hopefully, this will help the city attract additional businesses to this thriving area.”

“We are ecstatic about getting this grant, applying for it three years in a row,” added Mayor Beth Holtzman and Commissioner Kriebel.

The grant compliments previously awarded grants, including a $1.6 million grant to upgrade traffic signals on Ventnor Avenue and a $100,000 grant for bicycle lane striping on Ventnor Avenue.

The $1.6 million portion of the project will optimize five signals along the Ventnor Avenue corridor, from Oxford Avenue to Baton Rouge Avenue. The grant will upgrade traffic signal equipment and allow traffic signals to be timed to minimize delays, reduce vehicle emissions and improve traffic safety.

Atlantic County government was also recently awarded a $9.7 million contract for traffic signal upgrades at 28 intersections along Ventnor Avenue, from Dorset Avenue to the Borough of Longport. 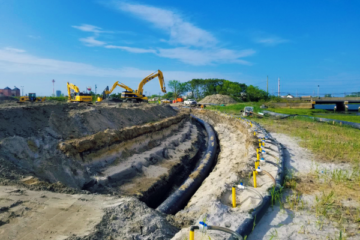