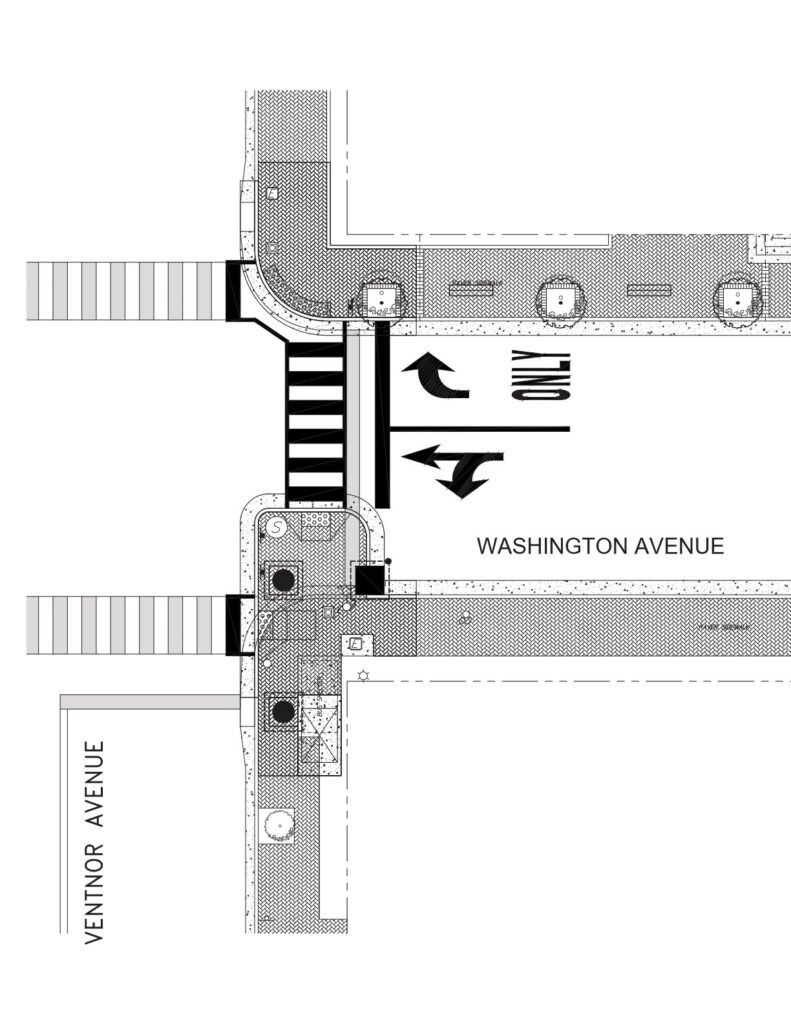 RVE/Improvements coming to the intersection of Washington and Ventnor avenues.

MARGATE – The Board of Commissioners Thursday, Feb. 18 awarded a contract to install traffic calming measures at the intersection of Washington and Ventnor avenues in front of Historic City Hall.

The city currently restricts traffic flow on the Wawa side of Washington Avenue using an unsightly concrete barrier that has been decorated with flower planters. The project will install a bump-out on the Wawa side of the street to eliminate the concrete barrier and the road will have two lanes of traffic approaching the traffic light at Ventnor Avenue, with one lane going straight on Washington Avenue or for left turns onto Ventnor Avenue, and a second lane for right turns only onto Ventnor Avenue. The pedestrian crosswalk will be restriped to increase visibility, and an existing bus shelter will be relocated to provide proper clearances.

L. Ferriozzi Concrete Co. of Atlantic City was awarded a $100,186 contract to do the work. The city received a total of six bids for the project, with the highest bid by West Bay Construction, Inc. totaling $197,520. The project is being funded by a $150,000 Safe Streets to Transit grant awarded to the city in 2019. The contract award is lower than the engineer’s estimate, Commissioner of Public Safety John Amodeo said.

Ferriozzi will mill and surface 24 of the 28 intersections along Dorset Avenue in Ventnor and along Ventnor Avenue, from milepost .27 in Ventnor to 5.26 in Longport. That project includes installing Advanced Traffic Signal Management, or “smart” traffic signals, at all intersections. The smart traffic lights have 360-degree cameras that can detect when vehicles are stacked at the light and allow them to be timed to improve the flow of traffic throughout the corridor.

“We will need to coordinate the timing of our work with the county’s project,” Dennis said.

Once scheduled, the contractor will have 60 days to complete the business district intersection improvements.

The city had considered a more elaborate design, but due to concerns about the loss of parking spaces, decided to scale down the project. The new design maintains all existing parking spaces, Dennis said.

The commissioners also approved going out to bid on the Atlantic Avenue road diet, which will reconfigure the four lane roadway into two lanes with a center turn lane and widened bicycle lanes on either side of the street.

Additionally, Amodeo provided a brief update on the status of the boardwalk promenade on Amherst Avenue.

According to Amodeo, some materials were delivered last Tuesday, all underground electrical has been completed, and some above ground utilities relocated. Framing was scheduled to start this week and delivery of ipe hardwood lumber for the boardwalk is scheduled for the first week in April.

“We’re on target to have it done by summer,” Amodeo said.