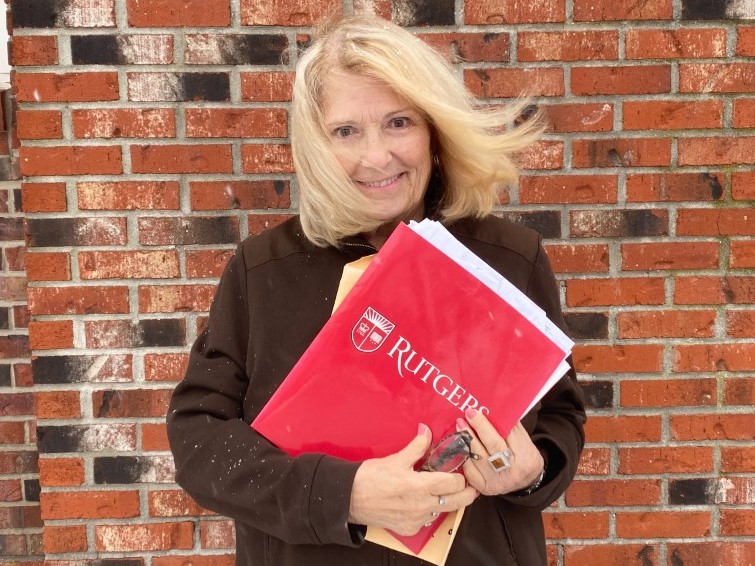 In fact, the retired casino executive isn’t just used to accepting challenges, but meeting them. A former competitive athlete, she’s earned a Black Belt in karate and won a state fencing title. When her son passed away suddenly, she stepped forward to raise his two daughters.

So three years ago, when Manno decided to enroll in Rutgers, at age 75, it didn’t seem like an impossible dream to her. Her teenage granddaughters were less confident.

“They were looking at me like, ‘Is she ready for the home?’” Manno remembers. “I mean, literally, they said ‘Have you lost your mind?’ And I said, ‘Maybe I have – but I’m going to find it again.’”

That year, she enrolled in the Rutgers Statewide program at Atlantic Cape Community College. This January, at 78, she graduated with her bachelor’s in liberal arts and plans to participate in Commencement in May.

“I’m a slow learner,” jokes Manno, who had started her degree half a century ago at Marymount College in Virginia, then transferred to Barry College in Florida, but didn’t finish her studies.

“After a couple of years, I realized I really wasn’t getting anything out of it,” she says. “So I left. I got married, had a couple of kids, went through the whole thing. But I always regretted not finishing, especially when I’d drive around and see the Rutgers sign. So finally I thought, well, I should at least send for my old transcripts. Rutgers probably won’t even accept them anyway.”

The next thing she knew, Manno was back in a classroom and adjusting to being a student again.

“The last time I wrote a term paper, it was on a typewriter,” she says. “The first time I was in the computer room, I had to ask one of the students, ‘How do you turn this thing on?’  And when we first went to virtual learning last spring in response to the pandemic, I thought I was going to go crazy. But, you know, you just keep going. I’ve always been interested in athletics, and education is like giving your brain a workout.” 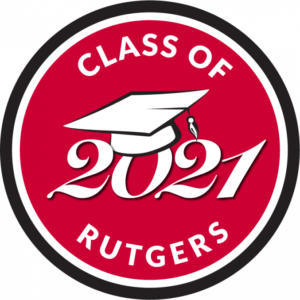 Manno thrived as a nontraditional student, which is one of the demographics Rutgers Statewide serves. Offering Rutgers courses and professors, but in community college settings, the program helps eliminate obstacles that might normally discourage enrollment.

“The students we see, they often have other commitments on their time, childcare or full-time jobs,” says Jason Jankowski, assistant director for Rutgers Statewide, part of the Division of Continuing Studies. “They can’t always get to Camden or New Brunswick to pursue that degree. So we bring the degree to them.”

Some students are fresh from community college and eager to advance their education. Others, like Manno, haven’t been on a campus in years.

“When I meet with students, it’s usually, ‘Let’s talk about your goal and what we can do to put you on the path to achieve it,’” Jankowski says. “The majority is probably focused on getting a degree for greater career opportunities; for others, like Patricia, it’s more about personal achievement. They’re there for the pure joy of learning.”

“For Patricia, it was all about the pursuit of knowledge,” agrees psychology professor Barbara Warner. “Every class, she sat right up there in the front row – I was just amazed at her energy and her intelligence, and her willingness to share. I think she enriched the other students’ experience. I know she enriched mine.”

Although Manno was concerned about the process of transferring her credits from years ago, she turned out to be in better shape than she expected.

“Most students, if they’ve taken college-level coursework, anything with a C or better is going to transfer,” says Jankowski. “And if they’ve been working in their field of study for a number of years, and acquired knowledge that way, sometimes we can do a Prior Learning Assessment and award credit based on a portfolio.”

Manno rose to meet the challenges in the last few years, including a long commute from her home in Margate City, which required taking two buses.  She completed her Rutgers degree with a 4.0.

“I mean, how’d that happen?” Manno says with a laugh. “I know some people laughed at me at first, going back to college at my age. But I am immune to their disdain. Besides, I think it’s motivated my granddaughters, convinced them to get as much education as you can. If their grandmother can do it, they can, too.”

“I think when her granddaughters said she couldn’t do it, it was initially a little bit of ‘Well, I’ll show you,’” says Jankowski. “But when she got here, she just plowed through the work. Older students coming back to college, they’re more seasoned than the traditional student. They often have a greater understanding of where they are and what they want to achieve.”

“It’s all because of those wonderful people at Rutgers,” Manno says. “I tell you, if I win the lottery tomorrow, I’m going to give them a building. The whole experience has been wonderful for me.”

She laughs. “But I still don’t know what I want to be when I grow up.”