‘Do Not Enter,’ Longport residents say 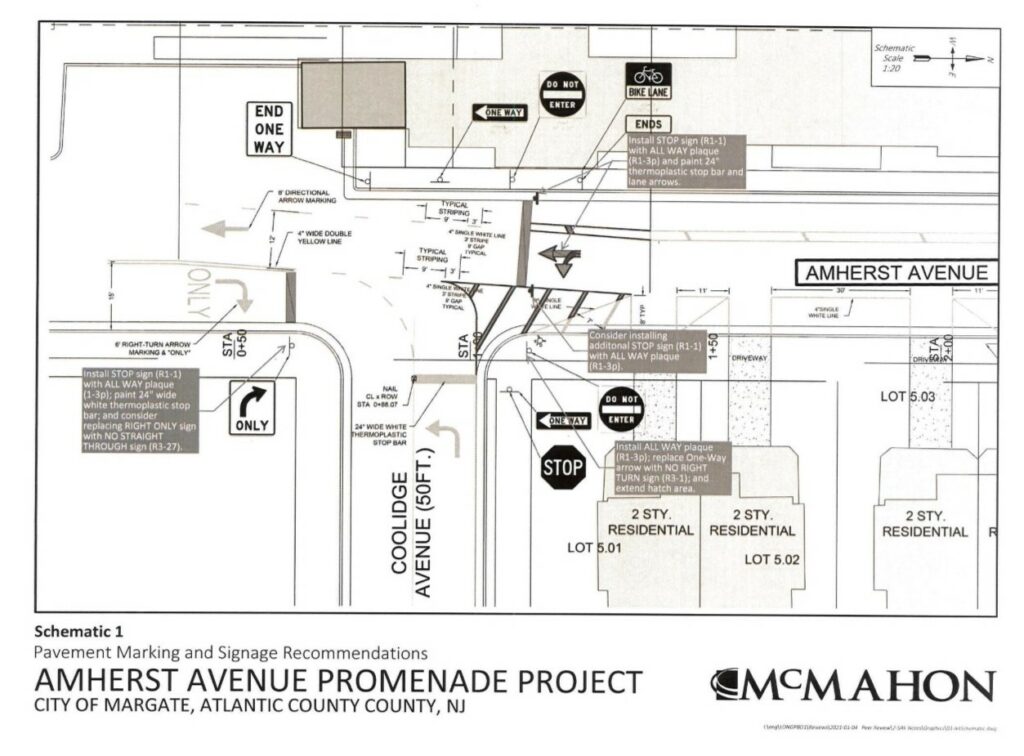 Proposed pavement markings for Amherst Avenue at the Longport border.

LONGPORT – If they residents of bucolic Longport have their way, traffic flowing into the borough on Amherst Avenue will be halted and drivers told to ‘go back from where you came.’
That was the sentiment echoed throughout Borough Hall Commission Chambers Monday evening when the Board of Commissioners held a special meeting to hear from residents about Margate’s ongoing Amherst Avenue promenade project, which will turn the bayfront street into a one-way avenue heading toward Longport.

Resident Patrick Armstrong set the stage for other residents who agreed that Margate has done a “phenomenal job” creating attractions in its Marina District, including expanding restaurants, establishing a water park, and building a boardwalk promenade where residents and visitors can stroll while they watch the sunset. However, Margate’s booming economy should not impact Longport’s quiet residential neighborhood, they said.

Traffic should be funneled to Ventnor and Atlantic avenues, which are designed to handle through traffic, he said.

About 50 people attended the meeting with social distancing protocols in place. Several residents stood outside in the hallway to listen to what was being said.

Traffic engineer Sandy Koza of McMahon Associates, Inc., who was hired to investigate traffic impact from the one-way change, said a comparison of historical and projected traffic counts indicate a third of the vehicle traffic on Amherst Avenue travels north, while two-thirds travel south toward Longport. Traffic counts vary from 100 to 350 vehicles depending on season and high-peak travel times.

In her report to the borough, Koza stated the roadway change would not have an adverse impact on Longport.

“The only impacts associated with the conversion is that vehicles that would like to park along Amherst Avenue that cannot find an available space between Washington and Coolidge Avenue will need to turn left onto Coolidge Avenue, turn left onto Monmouth Avenue and circle the area once more,” she wrote.

With the expansion of Lamberti’s Sunset Marina & Restaurant, there would be an additional 40-90 inbound and outbound trips during peak times, and 40-52 additional vehicles competing to park in the 77 spaces provided on Amherst Avenue, especially during the evening hours when the restaurant is at its busiest.

Koza recommended any traffic changes be reported to online mapping applications, such as Google Maps, to ensure drivers seeking directions on the internet are not routed in the wrong direction.

Emergency Management Coordinator Bruce Funk said he is concerned about the impact six restaurants and the marina industry will have when large trucks deliver food supplies and fuel to the area.

“A spill or major fire can be a major environmental concern we all have to respond to,” Funk said. “I think we need to look at what type of truck traffic will be coming into our municipality.”
Resident Fran Kenny said trucks already travel to the area, and park on the sidewalks to deliver to the restaurants because there is a lack of parking near the restaurants.

Planning/Zoning Board Chairman Tom McAllister said the Margate project was ill-conceived and not promoted in a neighborly fashion.

“I can’t believe they didn’t come here and talk to you fold first about the plan,” he said. “Stop them dead end right there at Coolidge, take a left and go back to where they came from.”
All the residents who spoke said the borough should erect a Do Not Enter sign at the borough border, sending motorists onto the last street in Margate – Coolidge Avenue.

“Keep them out and let them handle it,” she said.

Several residents said the borough should erect a barricade on the southbound lane during the summer seasons, to keep restaurant and water park patrons from entering Longport to find a parking space.

Fred Lutz said Margate has approved several development projects without requiring on-site parking, and those riding around trying to find a parking spot will end up in Longport.

“On one side of Coolidge there’s no parking and on the other side there are all driveways. Where are they going to go…but onto 36th, 35th and 34th,” he said. “We have to keep them out of the Longport area.”

He suggested establishing residential parking with placards for residents only.

She also suggested a small piece of bayfront land owned by Longport that currently houses a gazebo should be put to use to help alleviate the parking issues.

“Margate has never planned for and parking on any of their projects along the bay and now they want Longport to eat the problem,” she said.

If it were up to the Longport police chief, the borough should make it “inconvenient” for all motorists by turning residential north-south through streets into one-way streets traveling in the opposite direction they do in Margate, forcing traffic to Ventnor or Atlantic avenues.

“It won’t block people from coming into Longport, but it will be inconvenient,” Frank Culmone said, warning that Margate’s planned road diet on Atlantic Avenue will compound the problem and force traffic onto other north-south streets.

Resident Linda Young advocated for a Do Not Enter and a barricade from Memorial Day to Labor Day.

“We love Longport for what it is and we don’t want to be like Margate,” she said. “Margate keeps their problems, and we deal with what we have always dealt with.”

Longport is a residential community, with just three businesses on Atlantic Avenue – a real estate office and two restaurants – Ozzie’s and Catch. Residents said although they support Margate’s businesses, they live in Longport for its quiet, laid-back atmosphere.

Mayor Nicholas Russo said the borough would hear all perspectives, before making a decision on what to do about the issue.

“Let’s not forget that we use Margate for our pharmacy, gas, restaurants and schools. We depend on Margate and want to be a good neighbor…but we are sworn to represent the people of Longport,” he said. “Who here hasn’t been to Steve & Cookies or Maynard’s?”

Commissioner of Public Safety Dan Lawler recommended newly appointed engineer Ed Dennis Jr. and the police chief meet soon to discuss Culmone’s proposed recommendations on changing numerous traffic patterns on Longport streets so any changes can be made by the time Margate’s project is completed.

“This was an informative meeting,” Lawler said. “You spoke up and told us what you feel. We want to be prepared when Margate’s project is completed closer to Memorial Day.”